hi, i install 14.1.65 1969 COR H A firmware and have problem with wifi in AMT (radio state is unknown allways) and MEinfo64 tell “wireless micro-code mismatch - yes”

This is an ENGLISH forum ONLY.

We dont know the ASUS model… if the bios of the system has by default in latest bios FW15 you will not use any 14 to clear ou build with FIT.

Procedures MUST be read on the top of the thread, no reading no learning, fail is a sucess then…

FPT -greset as an optional to see if the FW gets re-initialized.
If not use MEinfo to check status and paste here.

So you have an issue in WiFi with the Asus Q570 after Asus provided you with the latest FW file… and of course, this is because you explained all this to Asus support.

Again… use the MEinfo tool to get detailed info on the ME FW status (Sry you already posted it)
or do as you want…want to clean it? Clean it then: [Guide] Clean Dumped Intel Engine (CS)ME/(CS)TXE Regions with Data Initialization - #434 by thanhluan119

Still as we dont know the CORRECT motherboard model…does it have USB BFB option?
A last resource option is re-programm the SPI and incremental bios update to the last one as a possible way to go back in FW version…some bios versions are advertised to NOT going to old versions…

You asked ASUS for an ME region for your system…they answered NO, …expected.
As ME region usually on desktop boards, are included in bios update files and they dont do remote support service… Oh i want to fix it… no no no, return the product.

We would need the files to have a look into the configuration- since ME 14 can’t read the config from ME region only it’d have to be the complete firmware images!

And in addition to your own english text you might write the text in your own language and run it through google translate and copy it into your thread in addition.

Im go back in shop for rollback firmware in service center… (14.1.65 AMT not show Wireless settings in web :16992 and after perform official update i have this “wireless code mismatch-yes”. reset bios and reset amt not help me).

if i verbose update - have error 0x00, but success update, screenshot not have sorry.

Well, vpro isn’t enough for WLAN Cards- it has to be the right model since there’s a µcode in the ME- firmware that has to support the WIFI adapter and it might be that AX210 is too new…

But anyway- this board has socketed SPI chips, FD, ME and start of bios region on 16 MB chip, rest of bios region on 8 MB chip. Would be easy to restore to a working version? Latest stock bios is still on 14.0.33.1125 and is a complete image.

i dont know how…

Download the CSME System Tools v14.0.20+ from
Intel (Converged Security) Management Engine: Drivers, Firmware and Tools (2-15)
(You probably still have them since you used MEInfo)

Run …\Intel CSME System Tools v14.0.20+ r20\Flash Programming Tool\WIN64\FPTW64.exe -d spi.bin
That will give you a complete backup of the current firmware (24MB) without programmer.

Check the type of the two bios chips, especially if they’re 1.8V or 3.3 V type

If you may be ready to simply continue with the ‘new’ firmware you might transfer the board specific data:

If you’re not sure if you prepared the stock bios correctly attach the files here. 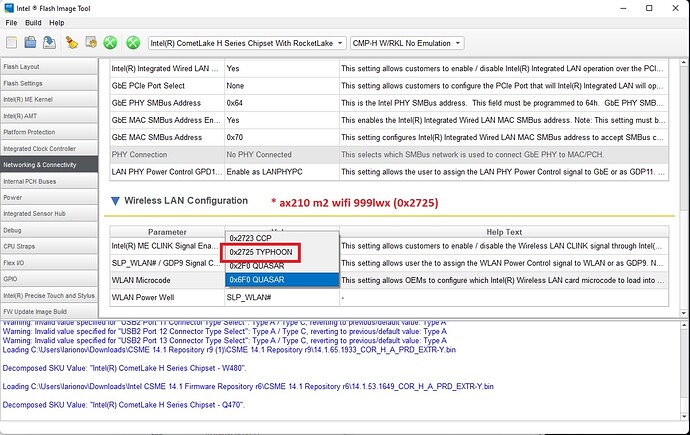 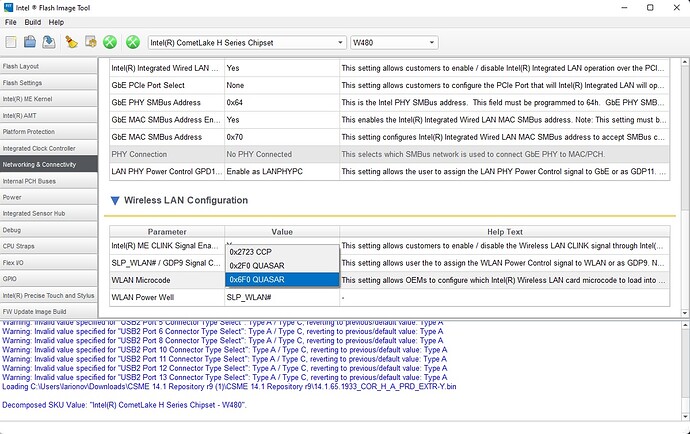 So either Intel excluded some firmware from later updates or it made a newer firmware that no longer supports older devices.

The CSME firmware files do have one firmware set in the WCOD partition and as set of firmwares after the last partition. But structure is unknown to me and even if one could transfer an older WLAN firmware to a newer CSME firmware file the results would be unpredictable. In addition the fixes for later versions might include firmware fixes, too.

Q570 is ME 15, Intel may or may not continue to have this firmware in coming CSME updates.

Try the attached file for the 16 MB chip. The 8 MB chip doesn’t need to get updated- static bios region only.