[Benchmarks] Comparison of the fastest consumer SSDs (SATA vs. M.2/PCIe)

@Fernando
A new firmware for i750 is now available.
You should update from 8EV10135 to 8EV10171 using the Intel SSD Data Center Tool v2.3.0
Great OS boot time improvment.

Already yesterday I have flashed the new Firmware and added >here< the new boot time of the Intel 750 SSD.

I cannot answer this question, becaue I didn’t look above your shoulders, when you configurated your system.
Did you follow my advices, which I have layed down >here<?

i750 NVMe 400 GB SSD ANVIL score goes down by 11% after applying new SSD firmware and new Intel NVMe driver:
Before: 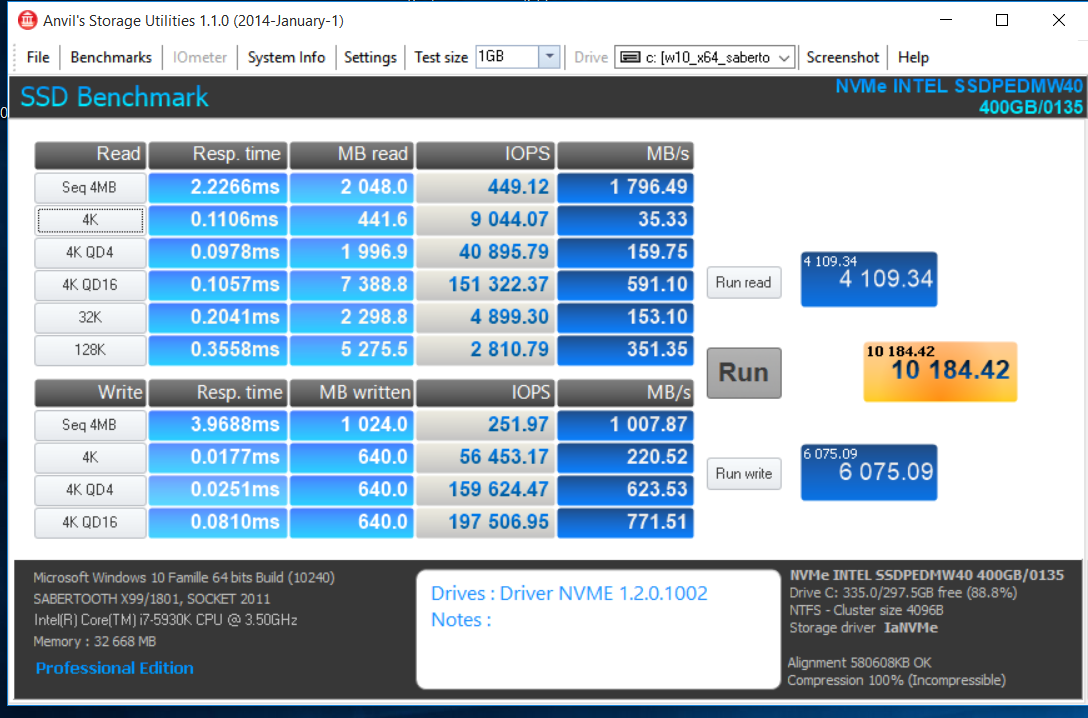 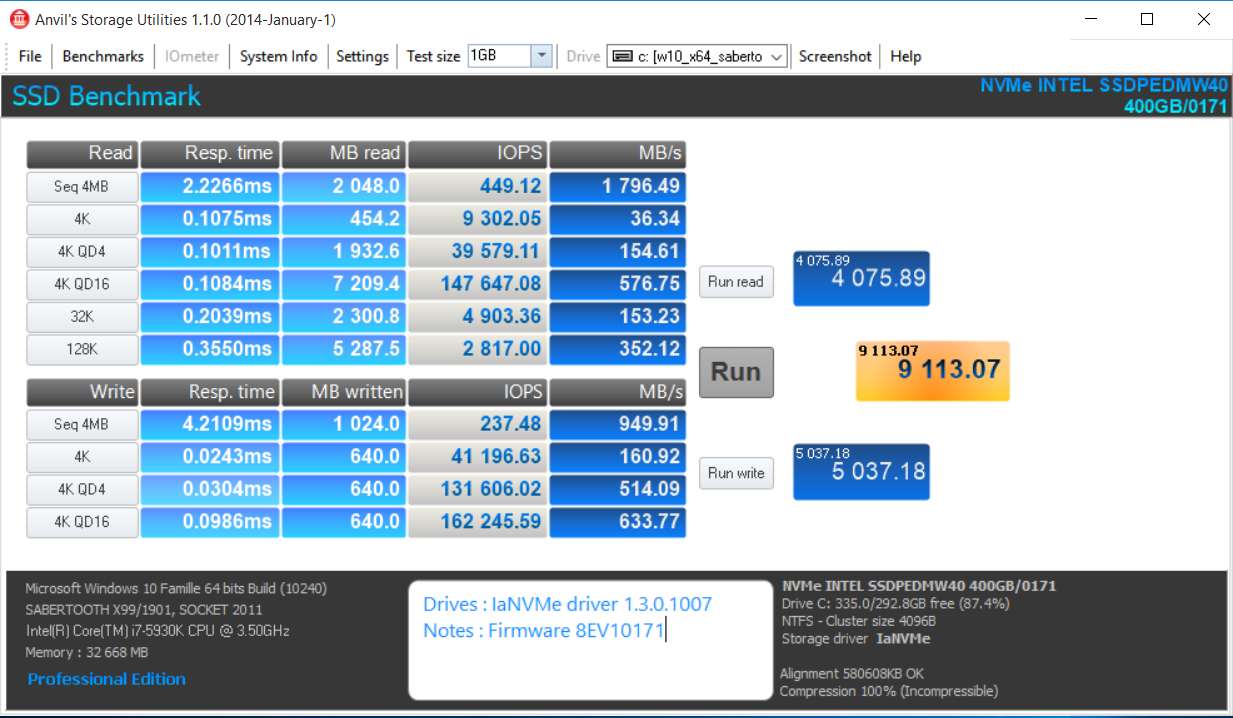 Yes, the benchmark results dropped a little bit with my system as well, but not as much as with yours.

Here are the results before flashing the new Firmware and installing the latest Intel NVMe driver: 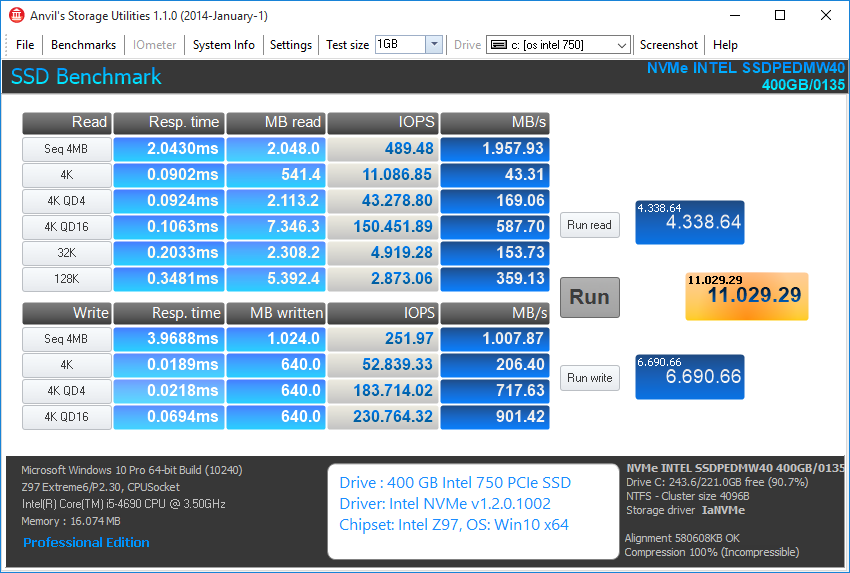 And this is what I got after having updated the Firmware and the driver: 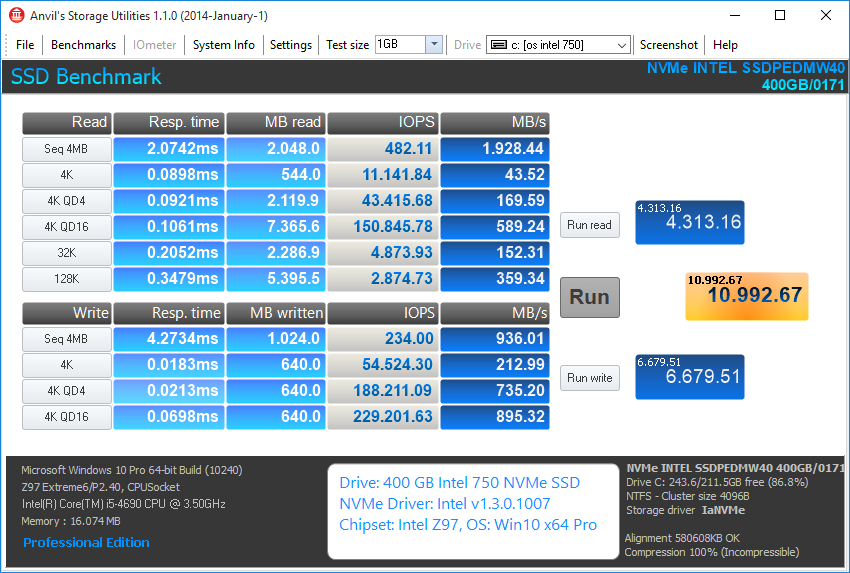 @ 100PIER:
What did you want to express by the pictures?
It is wellknown, that the Intel 750 NVMe SSD doesn’t allow to change its default Write-Caching Policies settings (contrary to the Samsung SM951 M.2 SSDs as AHCI and NVMe variants).
Nevertheless the WRITE scores (except the “Seq 4MB” ones) are much better than with any other single consumer SSD.

Here are my results: 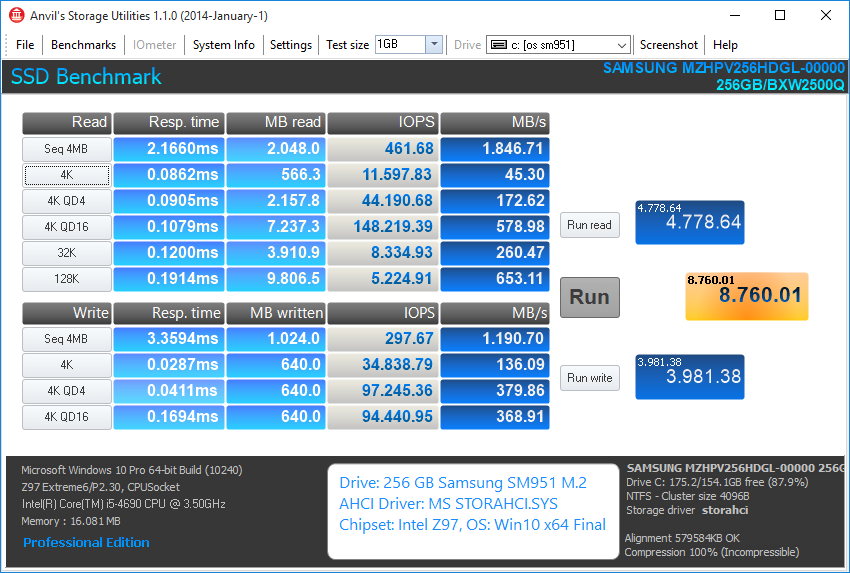 I have no explanation for that.

Ok, I have an explanation:
1. Our systems and the way we use them are completely different. Even a minor BIOS bug or a faulty setting can cause a massive drop of the performance.
2. Although we have benchmarked the same SSD models, their performance must not automaticly be identical.
By the way: For me the benchmark scores are much less important than the performance differences I really recognize while doing my daily work.

@Fernando ,
I totally agree with you about the daily work.
For the ‘as not expected’ NVMe devices performance do you think the GPU add in card should be the problem ?
On your system you have no add-in GPU and you use the internal Intel graphic chipsets.
As you know the i7-5930K has no internal GPU and so I use an additional NVIDIA 980 GTX card.
I assume NVMe protocol is very ‘sensitive’ to the PCIe bus bandwith availability ?
The more devices have to share the PCIe bus chipset bandwith, the less you get NVMe devices performant.
What do you think ?

For the ‘as not expected’ NVMe devices performance do you think the GPU add in card should be the problem ?

It may be possible, but I am not sure about it. 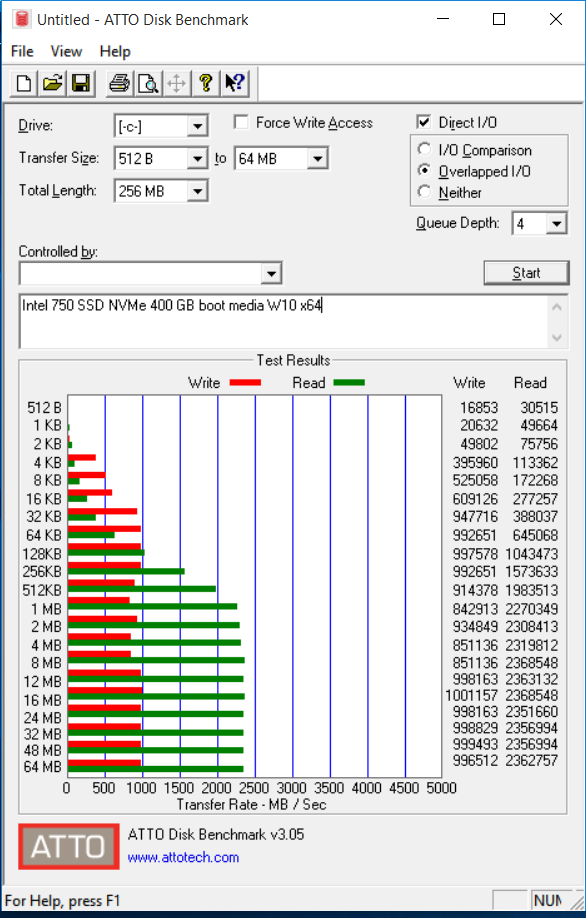 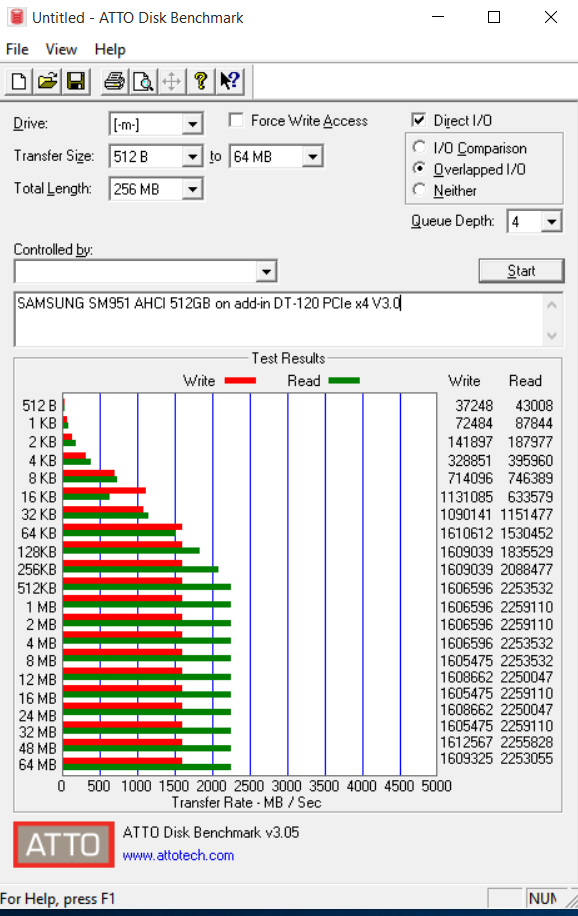 You should forget the ATTO results, because they are absolutely unrealistic.
Reason: The ATTO tool uses only compressible data by default, whereas other SSD benchmark tools like AS_SSD or Anvil’s Storage Utilities are using incompressible data as well.
That is why you get higher scores with the ATTO tool than with others and that is why some HDD/SSD manufacturers prefer to present ATTO results.

I’m interested, but new to to NVMe SSDs… Using 2 PCI-Express will I be able to make a bootable RAID system? I’m looking forward for 2x Samsung 950 Pro… 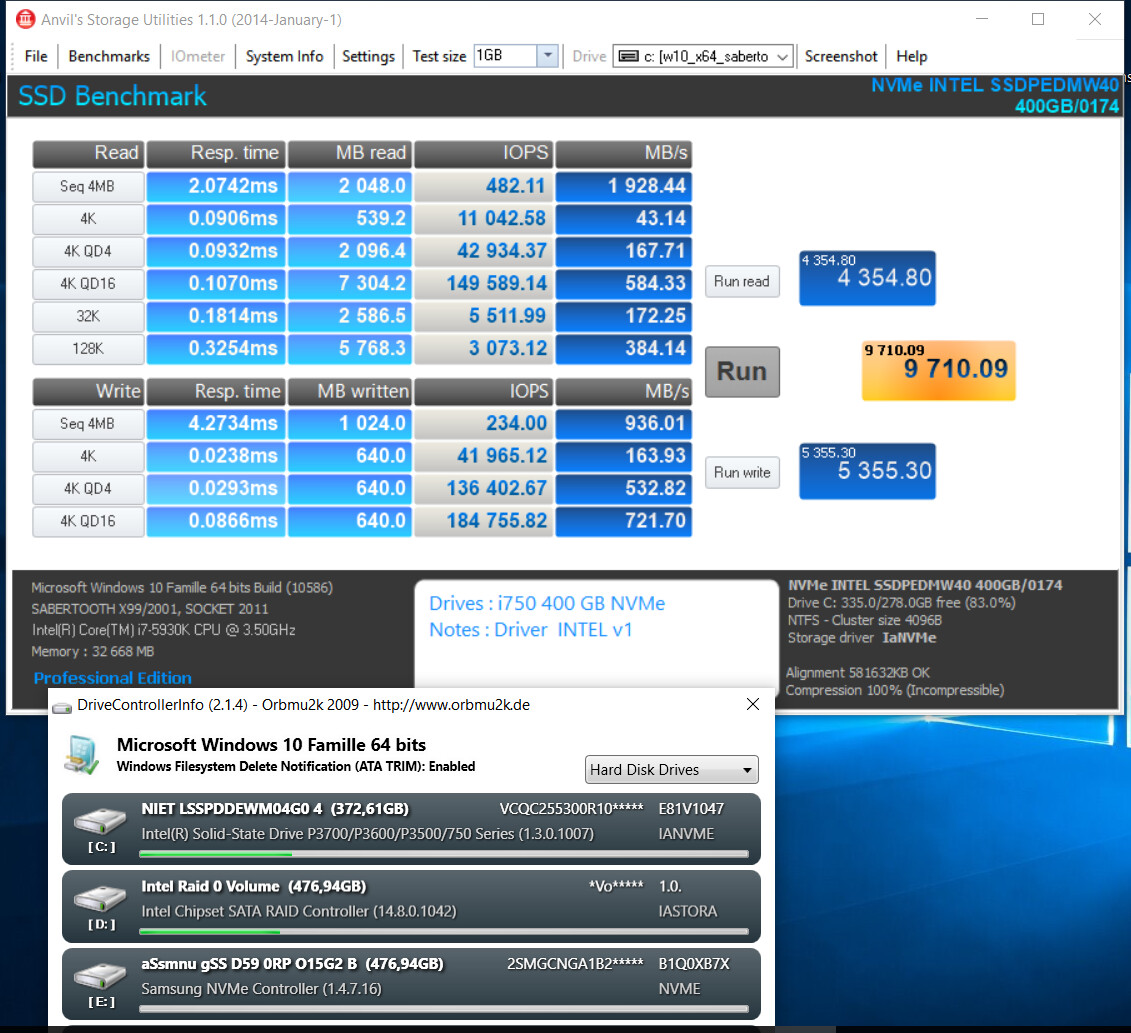 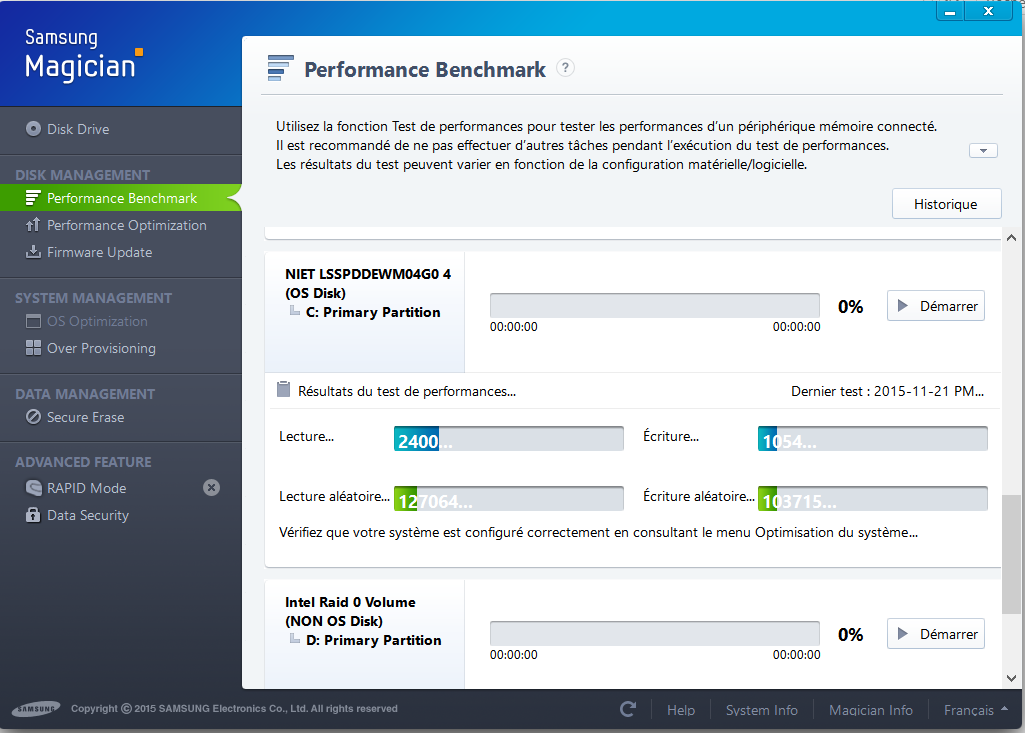 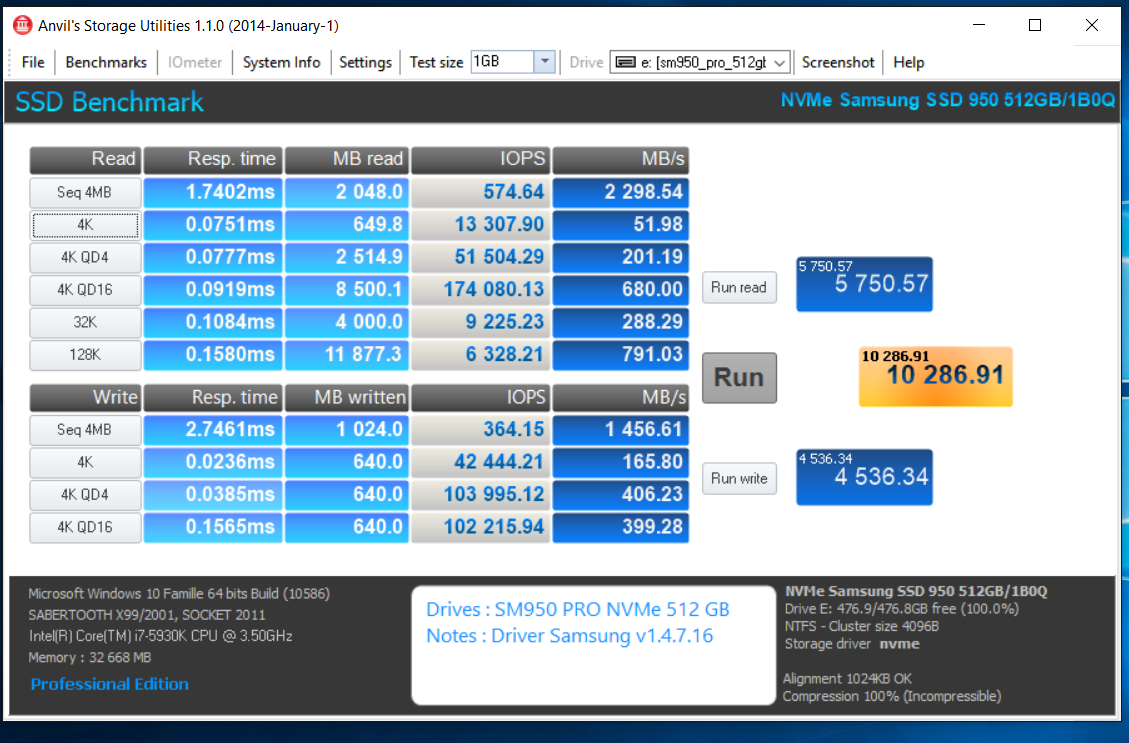 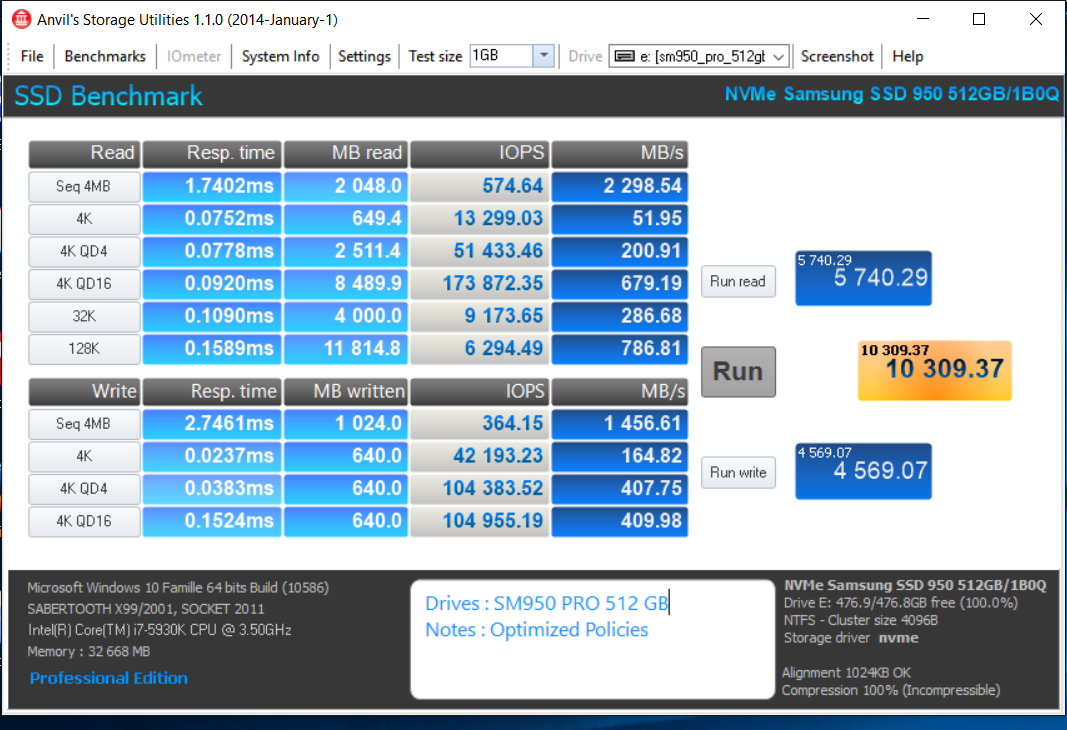 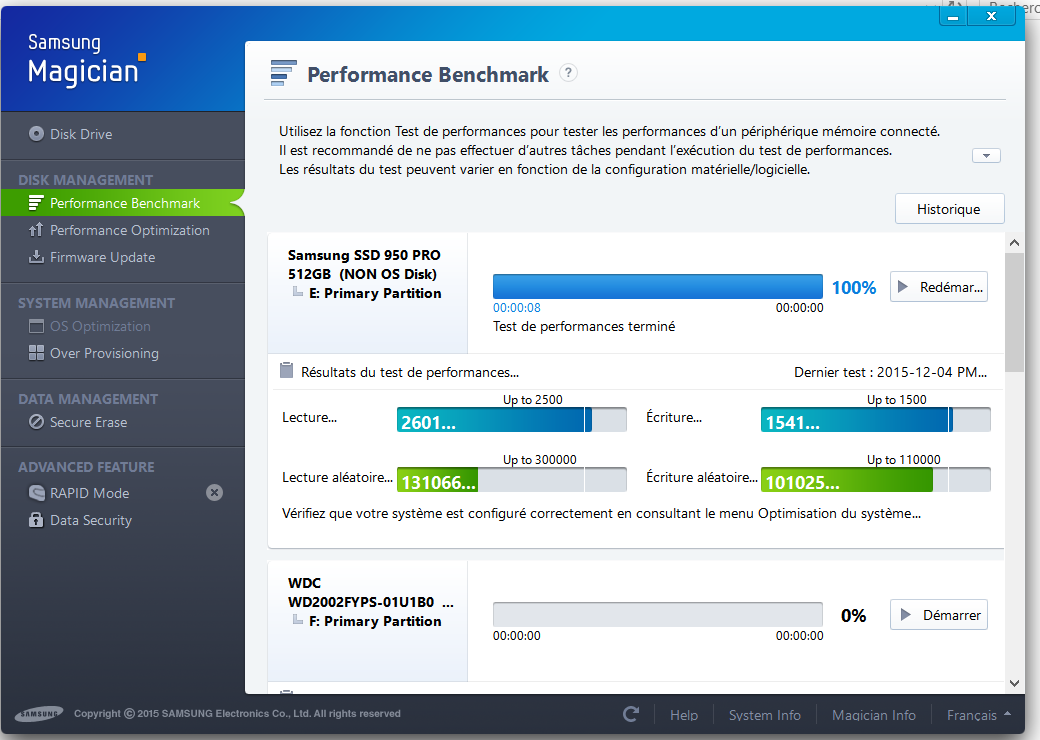 Contrary to i750 the Strategy Poilicies of SM950 PRO can be modified as this: 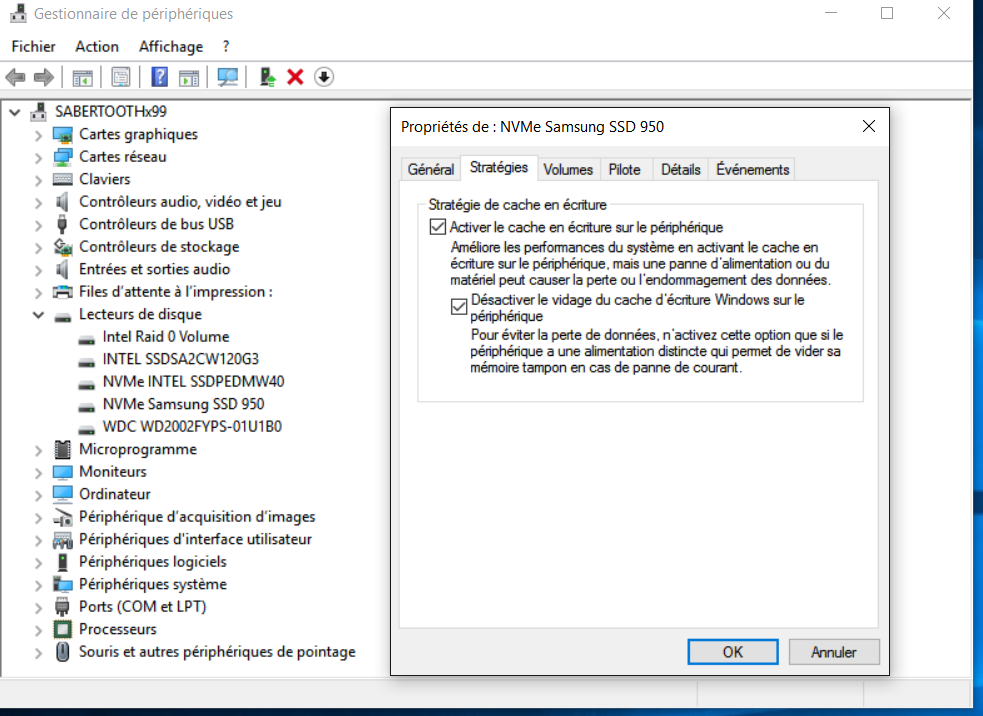 Since I got access to the currently fastest SSDs, I decided to repeat the benchmark tests, which I had already done in July 2015, and added some new test candidates (Samsung’s SM951 AHCI, SM951 NVMe and 950 Pro NVMe).
To make the results as comparable as possible, all tests were done with the same Z97 system and with the same OS (“November Edition” of Win10 x64) on drive C.

Just my opinion but for my system and my use, I have never seen 4K QD4 writes so the Pro is the best drive out of the bunch. This is my system.