Unfortunately, for AMD microcodes I can not say anything.

SoniX
To derive updated sections from the new version of Bios? Just I do not know on how many it correctly …
It is necessary to update old firmware of Asrock, ASUS will be a donor.

for example, CPUID : 306A9 - what actual Intel CPU does this correspond to? Is it an coreI3, corei5 etc… thanks.

quick question: for example, CPUID : 306A9 - what actual Intel CPU does this correspond to? Is it an coreI3, corei5 etc… thanks.

I tried to read as much as possible but it seems I’m missing some info I desperately need.

Want to update and add microcode for non supported cpu on my mobo MSI x58 platinum.

I open the bios.rom in mmtool v3.26 then go to CPU PATCH tab, and for non existent Xeon cpu I insert patch data with downloaded file. Then save rom.

What happens now is some of modules RomLoc change and I don’t know if that is allowed or not.

Should RomLoc for modules always be exactly the same after making any changes?
If yes, what is the usual procedure to keep RomLocs the same? I guess I can delete one of older CPU patches with exact size. What if there is no other cpu patch with exact same size? Creating some dummy bin file or something?

EDIT: essentially i’m upgrading i7 920 to Xeon X5670, downloaded Xeon X5670 206C2_v_1D_Microcode FIX and will even update microcode for i7 920. Also I will probably update realtek orom and intel raid orom. So really need to know if RomLoc can change or not. Thanks for quick replies, I’m itching to put new chip into this mobo

Everything is ready, just need to mod bios.

EDIT 2: I proceeded with flashing bios even though RomLoc were different. Installed Xeon and after CMOS reset, everything seems to be working. Yay!

EDIT 3: The only issue I seem to have is high DPC latency that wasn’t there before with i7 920. It happens when I run programs like CPU-Z or OCCT (without even running stability test, only starting it up) Latencies go into 4000-5000s and should be in 1000s https://i.imgur.com/KMSRgJF.png

After realizing my MSI x58 platinum has locked x20 uncore multiplier for Xeon X5670 I’m wondering is there any way to unlock it? I’ve read it might be unlocked in microcode update but I doubt it since I tried few suggested microcodes and flashed bios like that and verified they are being used and still uncore is locked at x20.

Maybe this method will be a bit easier, but one has to be sure it is for them

I have modded my MSI Notebook Bios (GE60 2PC Apache) with Ubu to Haswell Microcode 0x24. Is it safe to flash it ?

I am typing this message on a laptop that has been running Haswell Microcode 24 for a couple of weeks.

I used UBU 14. I take it that you did not have the problems I am having where UBU 15 and 16 show the microcodes twice and update twice, throwing an incompatible file size error.

yes it has shown twice but there was no error. But i dont flash it. Will try other method.

My 960 NVMe performance dropped from ~2.200MB/s to 1.500 and while an AS SSD benchmark you’ll get massive stuttering and CPU erros in HWinfo.
more about the instabilities here > http://www.overclock.net/t/1645289/haswe…ity-differences

I observed the same problem on my Haswell System with a 960 Pro: Massive SSD performance drop. This just sucks. The biggest problem for me is Windows as it is not possible to disable those patches.

And of course, how can I update the microcodes for this Mobo???

Is there anything that I can do???

Thanks and Kind regards.

Read entire post first and you should be able to modify your non-UEFI ASUS board using MMtool with updated CPU Microcode without issue.

The key thing is that the KB size of the new microcode being added to your AMI BIOS via MMtool must be an even multiple of 2K,4K,6K,8K,10K,12K, etc. or you’ll get the dreaded “This is not a valid CPU Microcode patch file” when you try to embed Intel’s original binaries.

The link posted above will walk you through what you need to do. Good luck.

Adding to @rdrguy info, thanks! That is helpful guide for some, but only Intel users. AMD is different methods, of which I am not sure about, but I do know you can get all new latest microcodes, choose AMD or Intel
https://github.com/platomav/CPUMicrocodes

You may also need to try different versions of MMtool depending on the BIOS you are working on, I am not sure if we are allowed to post links to these tools here in public, so PM me if you need a package of all the versions I have.
Some only work on new BIOS, some only on old, with variants of each that only work in certain instances, so sometimes you might need to try open file in many MMTool’s before you find the right one that works for your BIOS at that time.

Thank you so much for the info @rdrguy and @Lost_N_BIOS , first:

The ASUS M5AA88-V EVO is one of the lastest ASUS’s non-UEFI motherboards for the AM3+ plattform, like I said above, its last BIOS is dated 2013, and I’ve beeN able to modify the Option ROMs (LAN, AHCI and RAID) without problems and flash the MOD BIOS.

The problem is that I haven’t been able to find a guide to update the CPU microcodes in an AMD system (remember, AMI non-UEFI BIOS), because, the version of MMTOOL (3.26) that I using, doesn’t let me to add or update them.

I’ve tried to update the microcodes editing them with the HxD program but the result is that when I try to flash, the EZ Flash 2 app (from the BIOS) or AFUDOS, the integrity check fails and I can’t flash the BIOS. With MC Extract tool is easy to identify the correct Microcodes that I’ve to update, and find them in the repository is easuy too, but I don’t know how to add or replace them in the BIOS file.

Thank you so much guys for your help.

Oooops … I didn’t realize/check that the ASUS M5A88V-EVO was an AMD CPU board … my bad.

Next time I’ll make sure I know what the actual stated problem is before I send somebody down the wrong path.

I update them how you mentioned too, I posted more info on your other thread regarding flashing - How to? - AMD Microcode CPU update into an AMI BIOS (non-UEFI BIOS)
Your mod may be OK, just flashing needs to be done certain way sometimes with mod BIOS, see info in reply on above thread.

I’ve done exact same before too for AMD/Intel

Hi again guys, I need your help again, this time is with the ASUS Z97-P (the ASUS M5A88V-EVO is waitting) and its microcodes, the last version of MC Extractor (with database updated) shows me that there are 10 microcodes; because of that, UBU Tool (1.70 dev last version) is able to update only 8 of 10 MC, what is happening???, is this normal??

I want to say that there are two microcodes for the same CPU (cpu306C3_plat32) but with different dates and revisions, one of them is from 2013 (that MC can’t update) and the other is updated thanks to UBU tool: 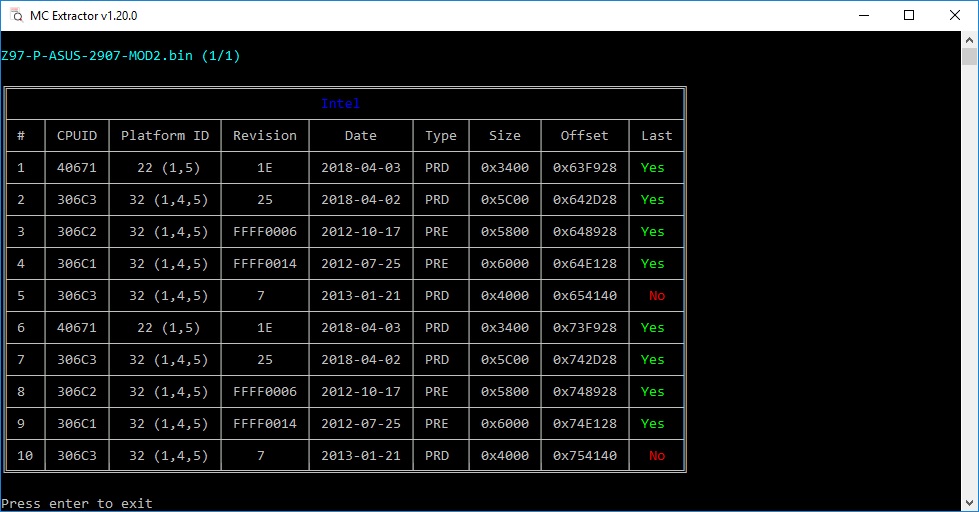 The file that correspond to those MCs is the file (from the exctracted folder created by the program MC Extractor) called:

I’m asking this question because I don’t know if this occurs only because there isn’t an update for this microcode in the repository of MC Extractor (checked) or because the tools (MCE and UBU) can’t identify well the microcode, I hope that you guys could help me again with this noob question, thank you so much for your time and help, kind regards.