MMtool is not used at all for graphics card BIOS, so that’s not what you used years ago, that tool is for motherboard BIOS

So you want 9600M GT BIOS edited for GPU Speed and Memory speed? If yes, dump GPU BIOS with GPU-z, and I will check the BIOS and show you what tools to use to do that modification.

Here is how with GPU-z

And, on the bottom of GPU-z, there is drop-out menu, if your card is SLI there will be two options in the drop-out menu, dump BIOS from each one (Select top choice, dump BIOS, select bottom choice, dump BIOS) because both BIOS will need updated at same time.
Be aware, GPU-z BIOS flashing on laptop is VERY risky, you cannot easily recovery if the flash goes badly. It may be best to make these changes with software in windows.

i know.9600m gt bios was inside motherboard bios.Used mmtool to extract it.Recomposed it and flashed it succesfully.Also used phoenix tool aswell,dont remember exactly.Used nibitor for vga bios and so on.Dont have that acer for years now. Now i have the modern dell.Cant extract the mb bios from dell,s exe.I do have the maxwell nvidia bios editor.I can not extract the mb bios for composing.Gpu z propably works for mxm(socketed gpu).My gpu is build onto mb.

Link me to your stock BIOS exe and I’ll check it out and we will see. You could be correct, but that’s not the norm, especially for add-in PCIE cards like you mentioned. Maybe it’s not add-in though, possibly it’s formed into part of the actual motherboard.

Did you try dumping via GPU-z as I mentioned anyway, if not do that, zip those up and send me link, and also add link to Dell Stock BIOS and I’ll check it all out for you.

Gpu z -bios reading not supported on the device

How can I access my gt 930m bios? -i also add this.Different laptop,but he managed like this.

i did try 7-zip and universal extractor for mb bios exe file.Both can not extract

Ohh, don’t worry, I can extract BIOS from Dell, not a problem there. Show me GPU-z error in image, with full GPU-z window visible too, thanks

On that thread, they talk about vBIOS within BIOS, like you mentioned, so it must not be a PCIE card, it must be soldered onto/made into part of the board (not an add-in card)

I’ll get the BIOS extracted for you no problem, do you need me to modify the vBIOS, or just pack it up for you to mess with?

wow,quick respond.You could modify the bios and also send the extracted exe. I would like the vga bios inside to have 1270 boost clock for gpu and 1125ddr3(2250 effective)for memory.If possible,then also +0.1v for gpu. will add picture soon 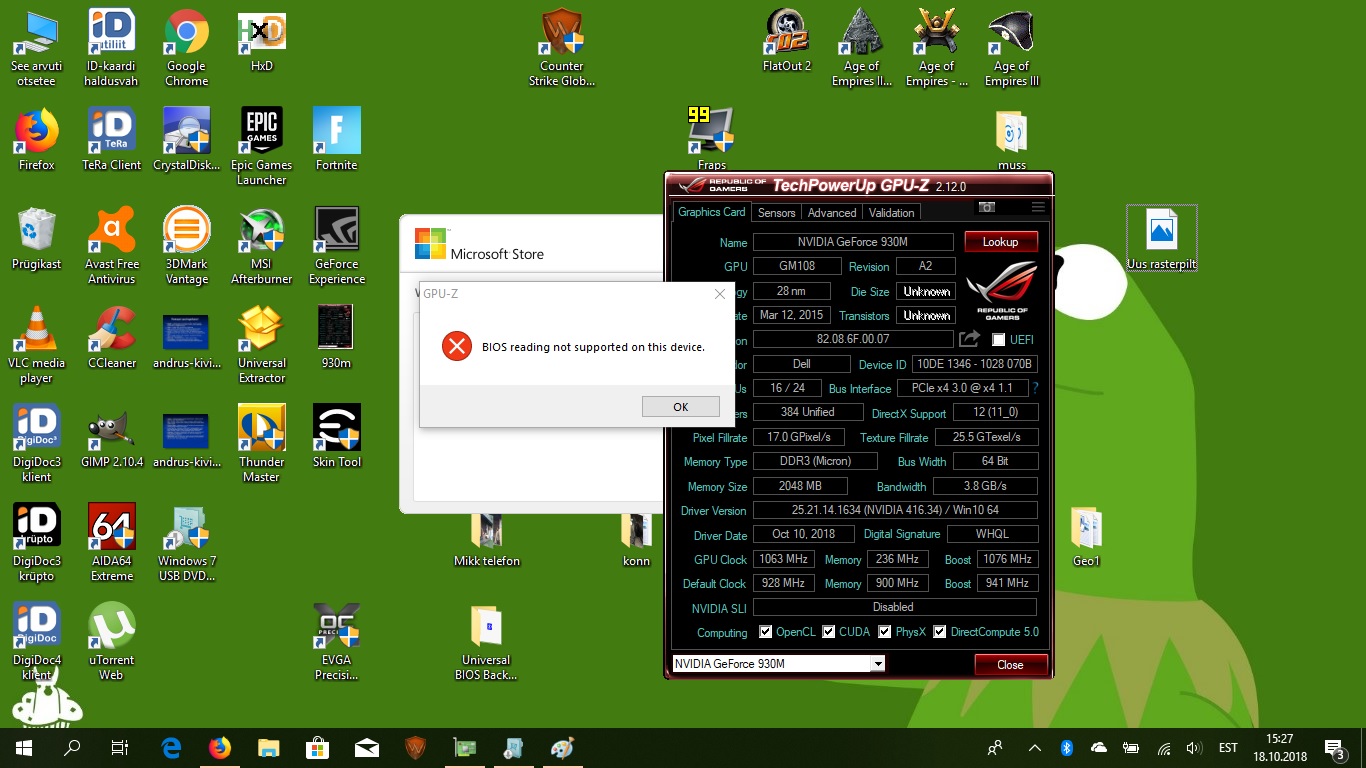 I try to reply fast when I am here, but heading out now sorry, will catch up with you again tonight. I’ve already extracted BIOS, and vBIOS (2x Intel EFI/GOP for CPU’s) and then x3 for nVIDA in there so please add GPU-z image so I can see which BIOS card is using now

So, your GPU has SLI possibly? I see it says SLI Disabled in GPU-z, can you enable SLI in the Nvidia software, or are you sure this is one core GFX?
Before I do anything, if you can enable, please enable SLI, and then in the drop-out menu in GPU-z, pick the second bottom most entry for 930M and see if the BIOS version shown is the same for that core as it is for the one you have in the image above.


*Edit @frossy32
Here is extracted BIOS (R00), and extracted Nvidia vBIOS files, please note the one I mentioned as used from your initial GPU-z image, it’s probably only one that needs edited.
Also included is modified vBIOS I made, Maxwell vBIOS editor, and a modified BIOS with the inserted vBIOS I made based on your requested settings (1267.5 GPU Boost clock set, couldn’t do 1270 exact and I think 1280 was next, and 1125 set for memory)
https://www.sendspace.com/file/89ubck

Flash BIOS with AFU/AFUWin/AFUWINGUI, or whatever other method you know works.
I know AFUWin/AFUWINGUI works due to exe being compiled with AMI tools and the stock included command flash, but unsure what version you need, if needed later I can package up a few versions for you to try.

82.08.6F.00.07 - looks correct,but subvendor acer and memory clock 1000.Looks like a gdram 5 version from acer? My memory 900mhz by default.Could have had something mixed?Maybe maxwell reads the name wrongly,but the default memory clock… definately 1 nvidia gpu

Yes, probably Maxwell issue, since GPU-z does not show your BIOS as either of the other two similar versions. Or could be Dell is lazy and used something from an Acer file?
I checked the file with hex via string and Unicode nothing mentions Acer, but it could be called via some manufacture ID via hex code, this could be what Dell left or just as mentioned Maxwell error/issue

I was not sure on that 1000 memory either, just assumed maybe it’s reading it wrong or something, all three Nvidia vBIOS have that 1001 memory speed when opening, and all say Acer (All also have 928 TDP and 941 Boost)

any ideas for possible flash options?

So at grub prompt you will type >> Setup_var 0x5A2 0x0
Then boot to windows and get admin CMD prompt from FPT folder and enter >> FPTw -bios -f BIOSname.rom