The Hyper-threading (HT) might not work with 6-cores CPUs (i7-8700K). The problem is that the the BIOS of the boards is configured to support maximum of 8 (logical) CPUs. This guide will show you how to change/increase the maximum value of supported CPUs in your BIOS from 8 to 16. We use BIOS of Asus Maximus VIII Impact (M8I) as an example but these steps should work for BIOSes of other Z170, Z270 boards as well. Basic knowledge of UEFITool, hex editor/disassembler is required.

According to dsanke, it looks like on some boards/BIOS variants additional module(s) needs to be patched (we have no solution for this):

Download UEFIPatch. Place UEFIPatch, extracted patches.txt from the attachment and the BIOS file in the same folder. Run UEFIPatch on the BIOS file:

If the file was patched (at one or two locations) skip to step 2 - modifying ACPI tables. If nothing was patched, please write a post with a link to your BIOS file, we can update patches.txt file. Alternatively, follow the guide: 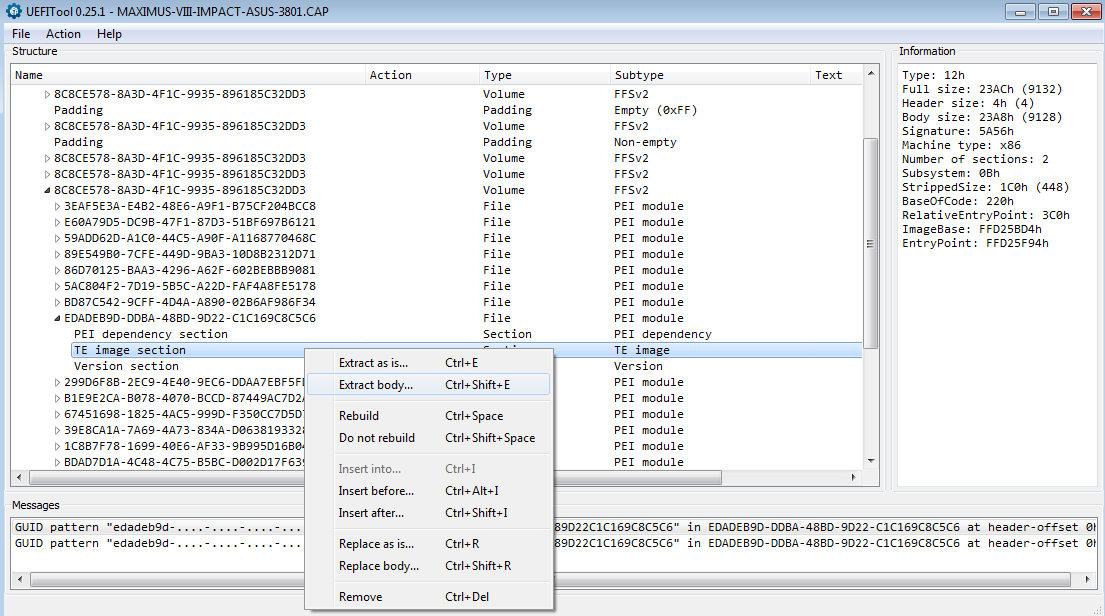 Open the extracted file in disassembler. The fix consist of patching 3 lines of code. The code, that is responsible for allocating and initializing some CPU structures. We need to replace:


At file offset 0x992 (this location may/will be different for different version of BIOS), there is a code responsible for allocating space/memory for some structures describing CPUs.
Some technical details/math here - assuming:

The total memory that needs to be allocated is:

As we can't write instruction:

Changes at offsets 9c4, a4b follow the same principle - we are doubling the amount of CPUs, thus we need to double the numbers:

In the end, we only need to patch/modify 6 bytes:

Save changes, replace body using UEFITool (note that this module is located at two locations in BIOS, we better replace both): 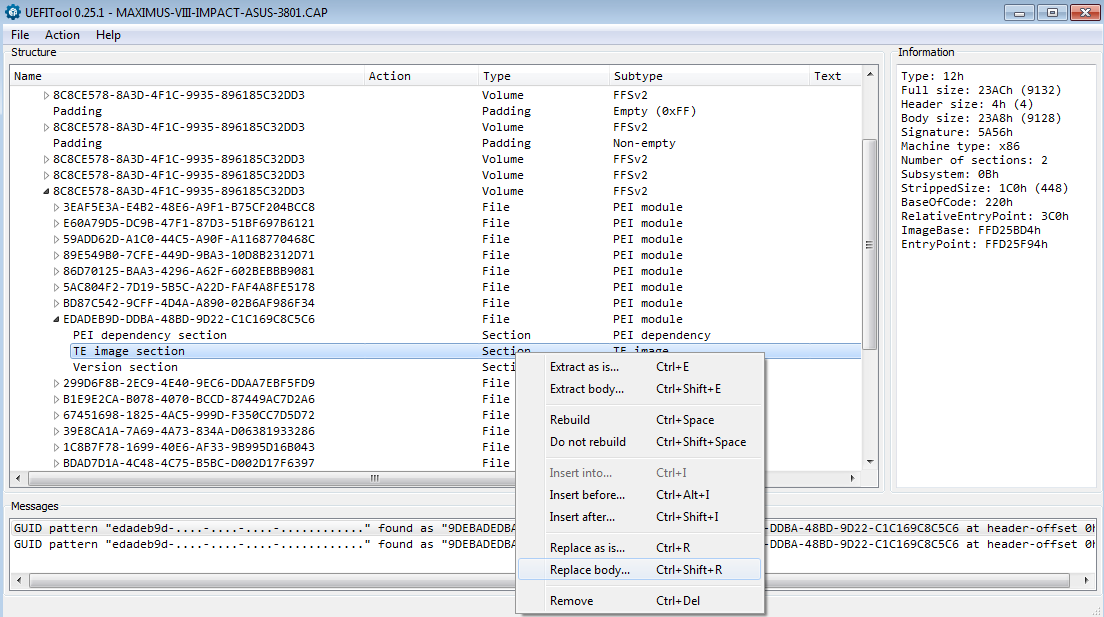 After this change (and flashing modified BIOS) we should be able to successfully boot with 6C/12T active (on 8700K). For proper operation (power management in operating system) we need to modify ACPI tables now.

We need to make these steps to fix ACPI tables:

For reading BIOS we will use UEFITool NE alpha (it has integrated hex view), this version cannot save/modify BIOS, use older version for this. For decompiling/recompiling ACPI tables we will use iASL tool from ACPICA.org

The simple way - assuming that BIOS device name for CPU number 8 is “_PR.CPU7” - we start by searching string/text “CPU7” in the body of our BIOS using UEFITool: 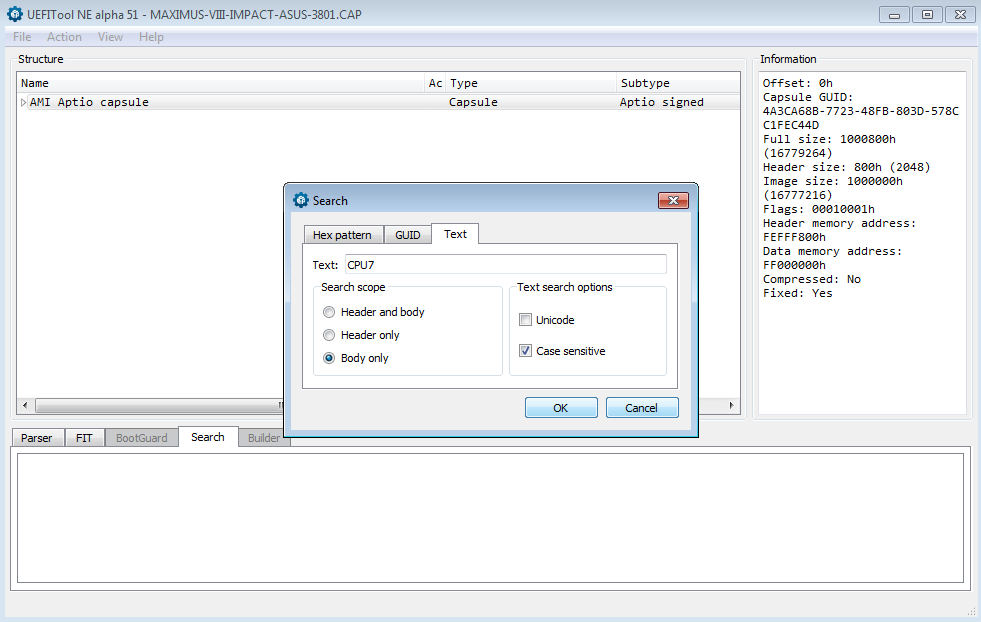 This string is located in couple of Raw sections and one PE32 image section. Each Raw section is actually a (compiled) ACPI table: 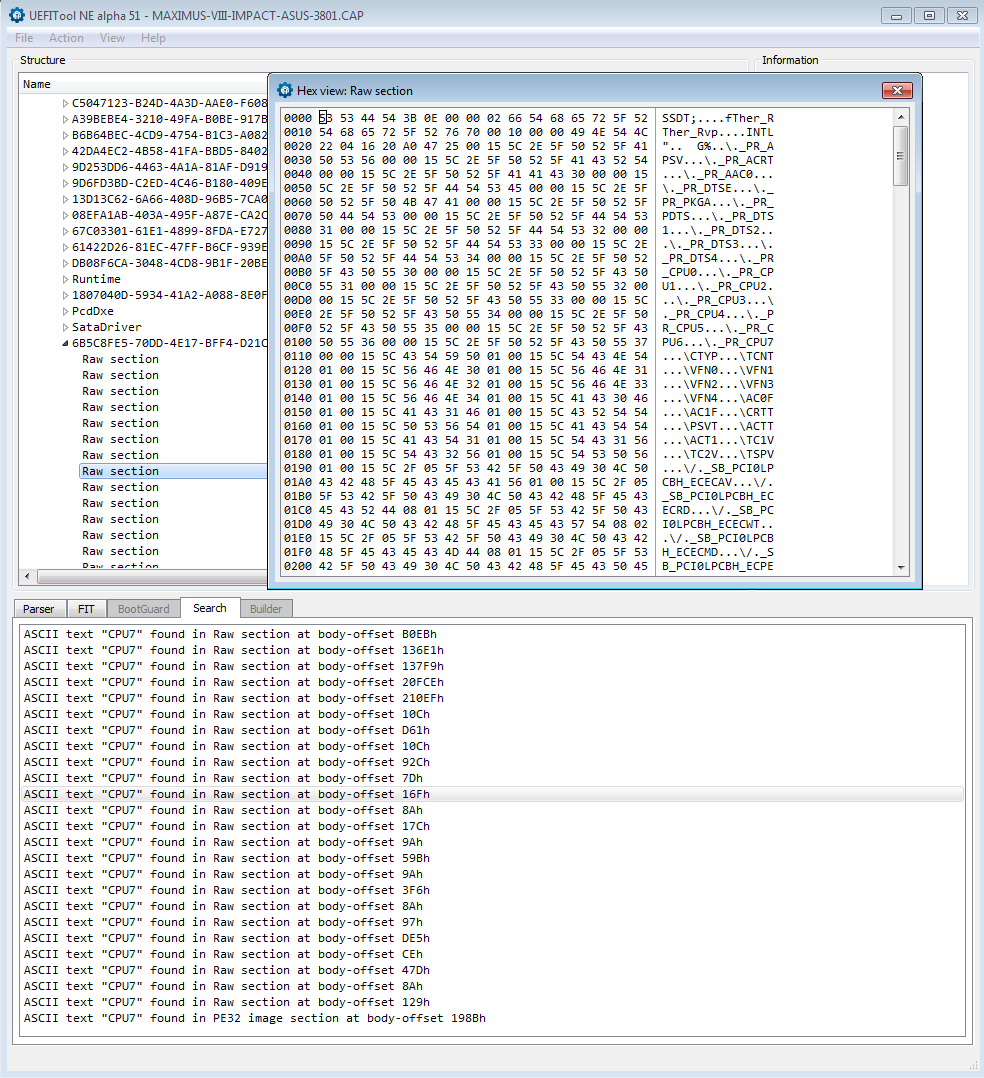 We will ignore the PE32 image (there is no need to patch this file) and extract only Raw sections that contain our string. We also write down the order/location of the extracted section(s) (under specific GUID) so we know exactly what section we are replacing in step 2.5.

Now we execute iASL tool on files extracted in step 2.1:

We get human readable/decompiled text file with extension ".dsl" that we can read/edit with notepad: 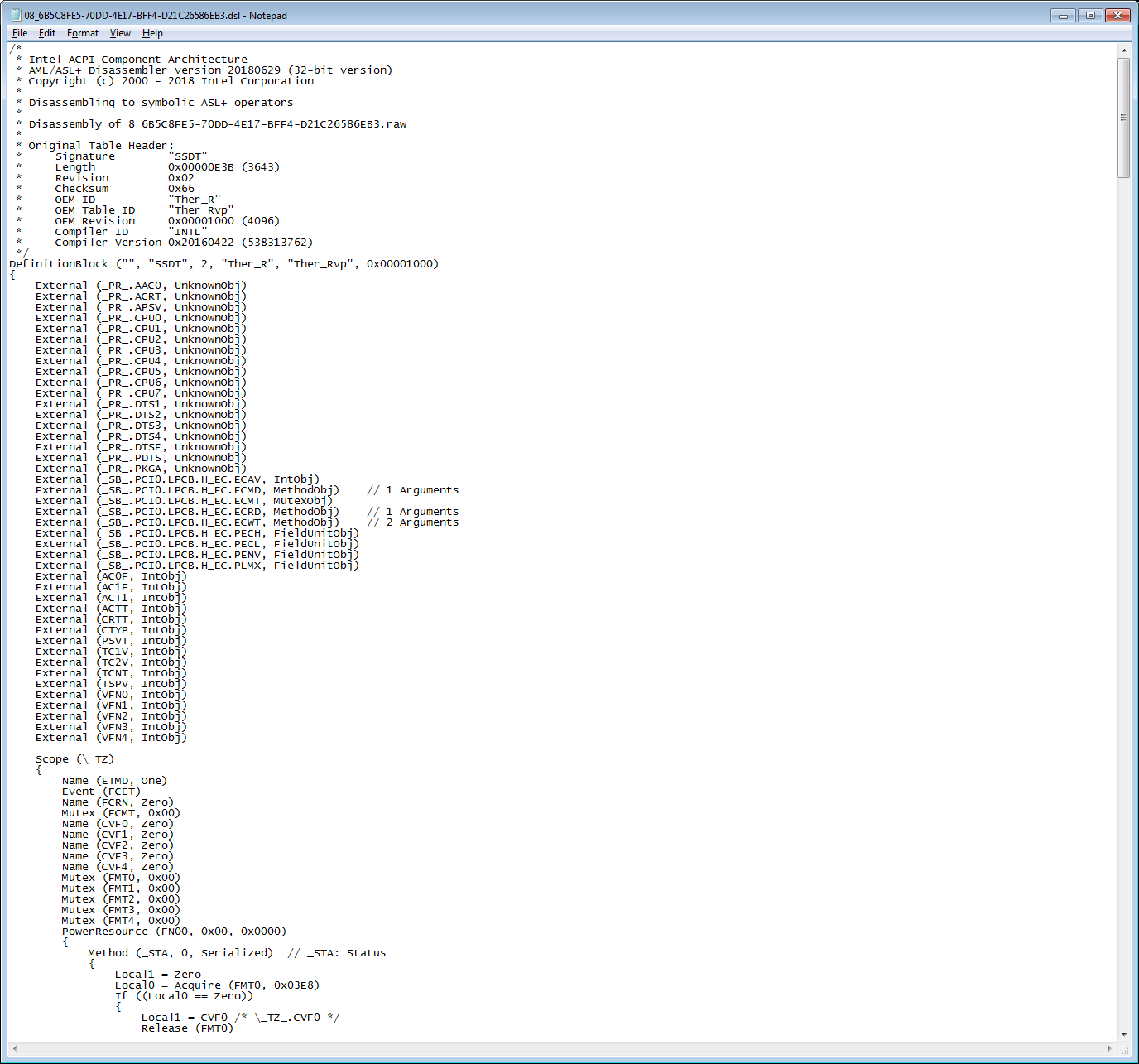 Using iASL tool we have decompiled these ACPI tables: 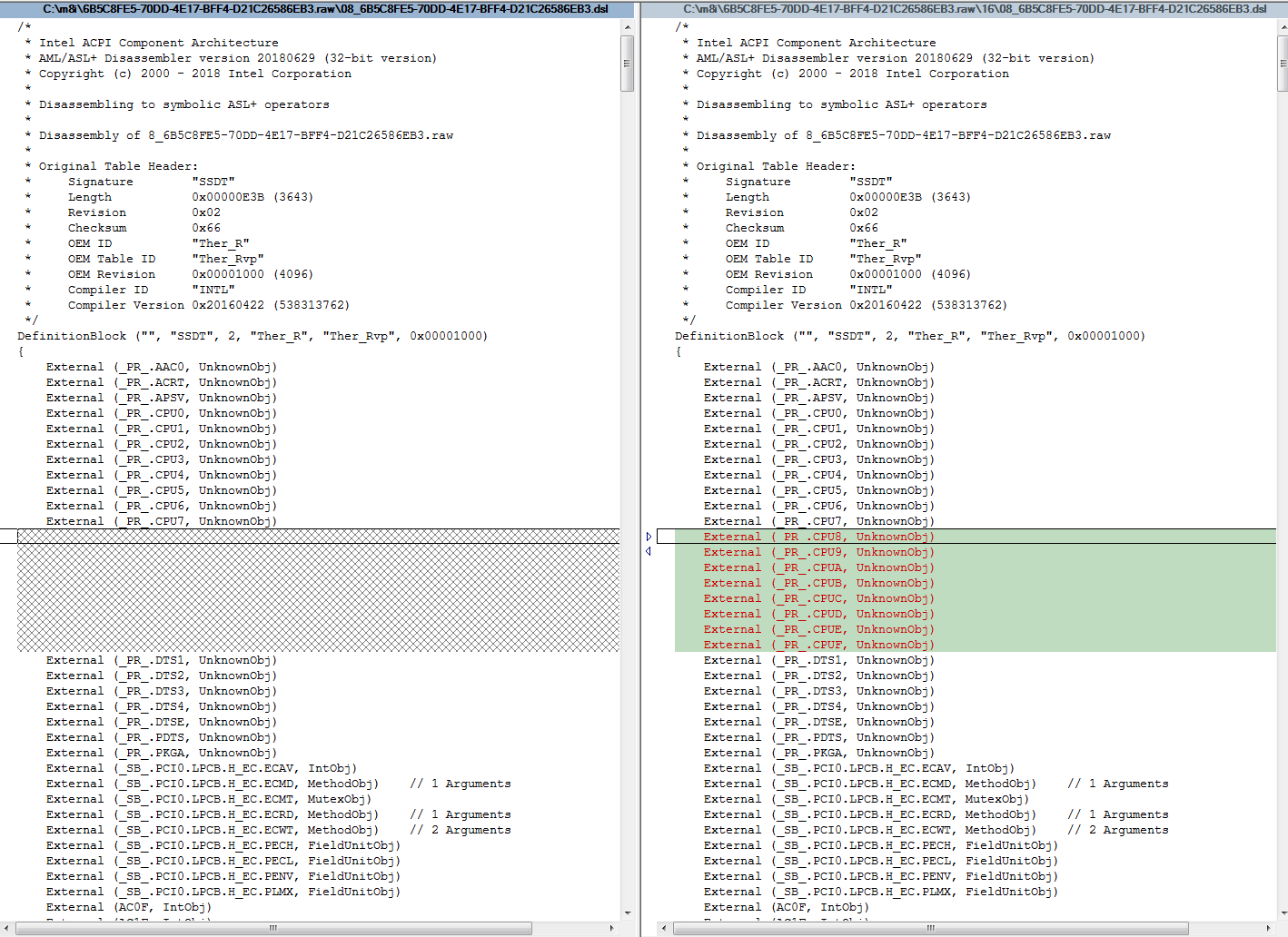 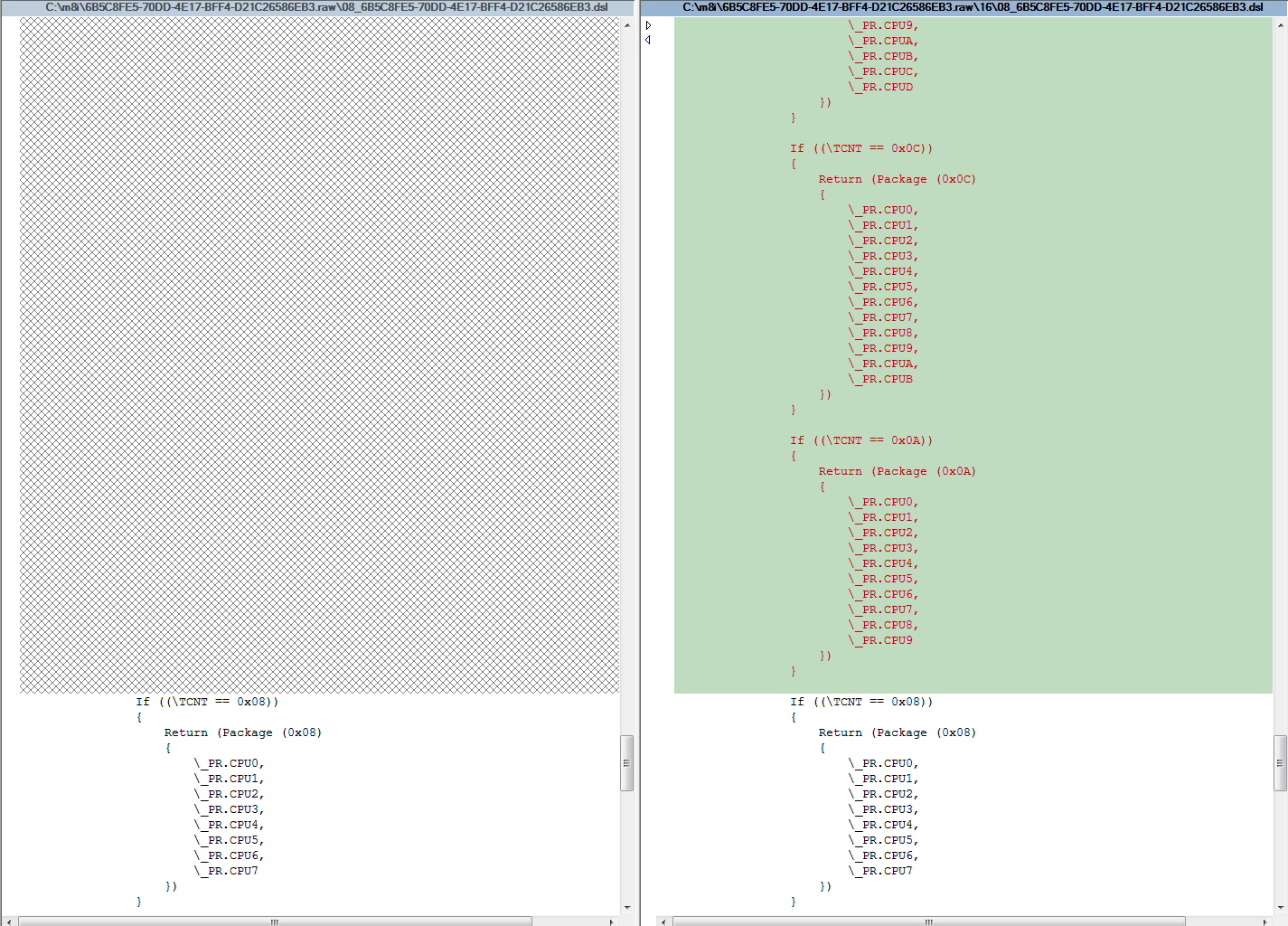 The changes are pretty straightforward. When we see block of code with "CPU0", "CPU1" .. "CPU7" we simply create/append new block that will contain "CPU8", "CPU9" .. "CPUF". All modified files, for Maximus VIII Impact (M8I), are attached. Opening original and modified file (from subfolder "16"), in file compare tool, will help to understand what changes need to be done. Notice, that we also need to make changes to all references/objects/variables that are related to CPUs: 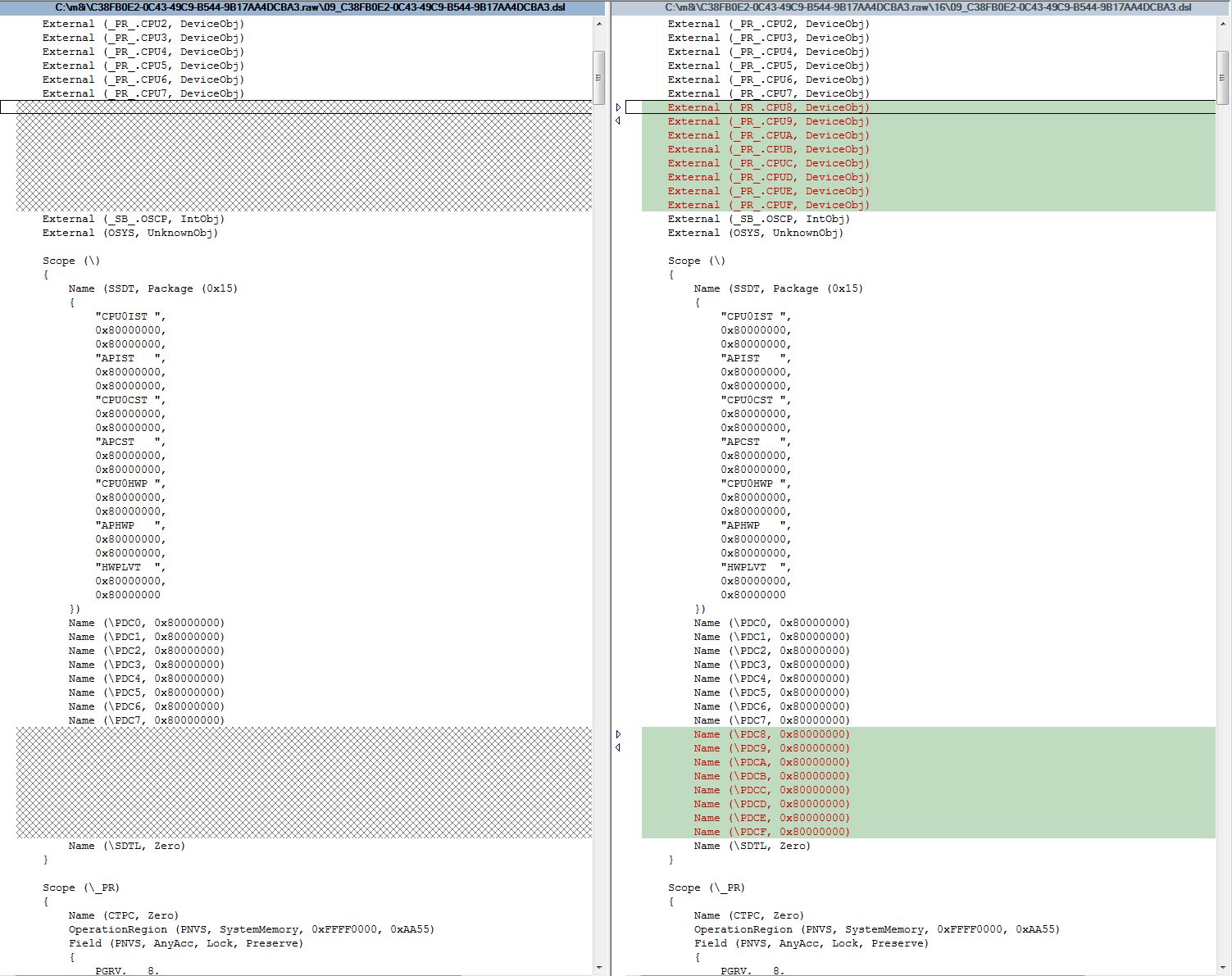 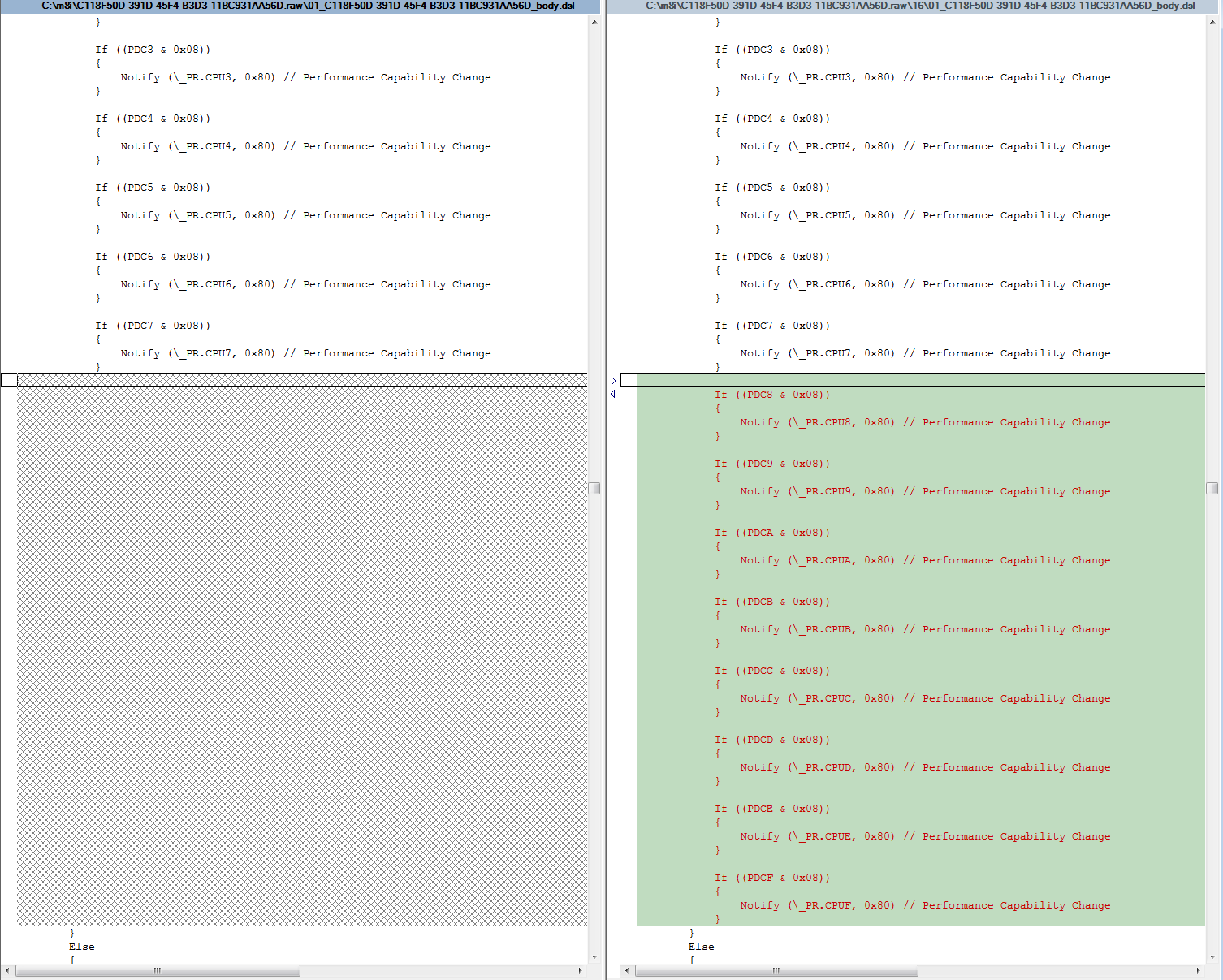 On M8I, these new names/variables are defined:

Special care should be taken with "A M I " table. There is a code: 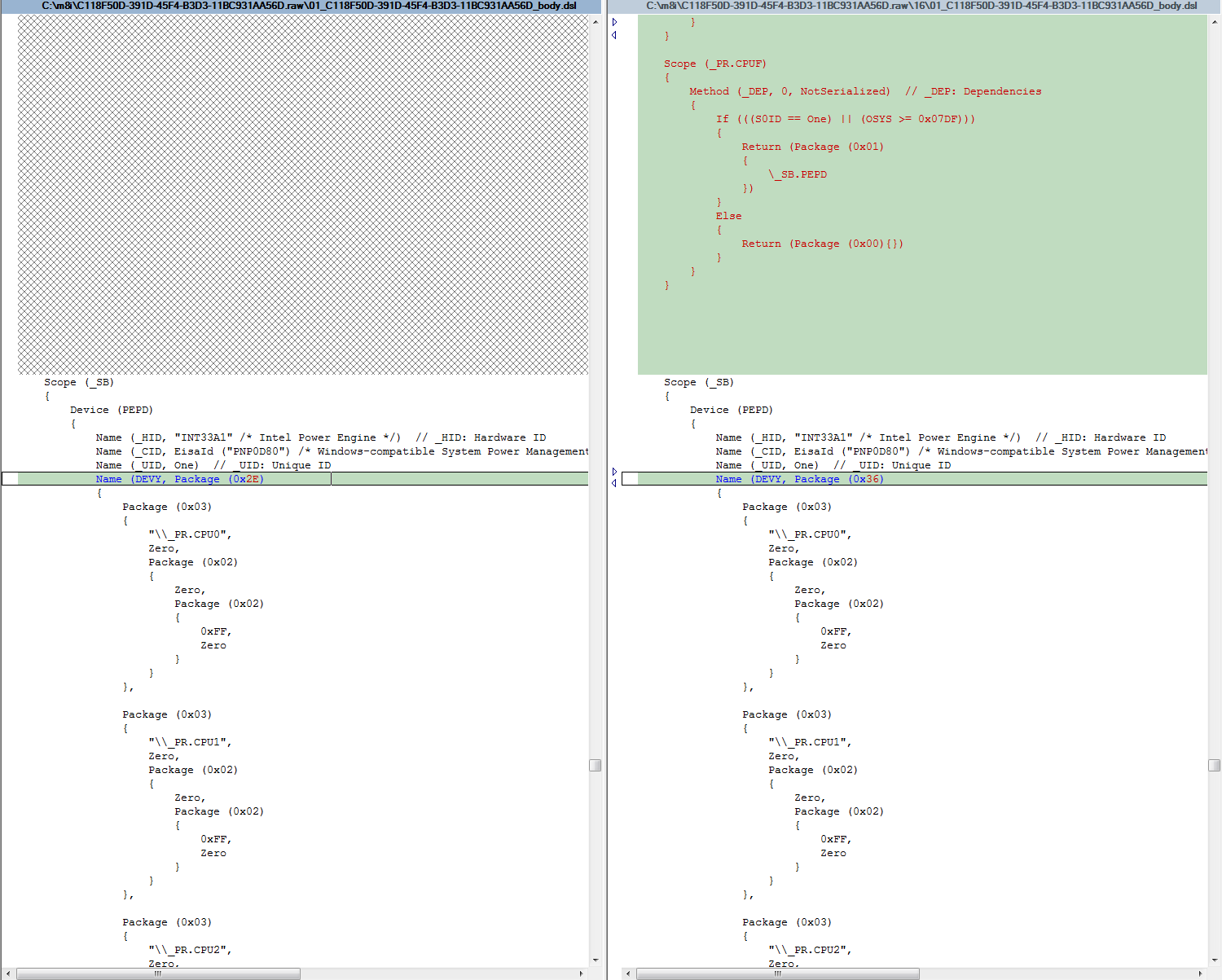 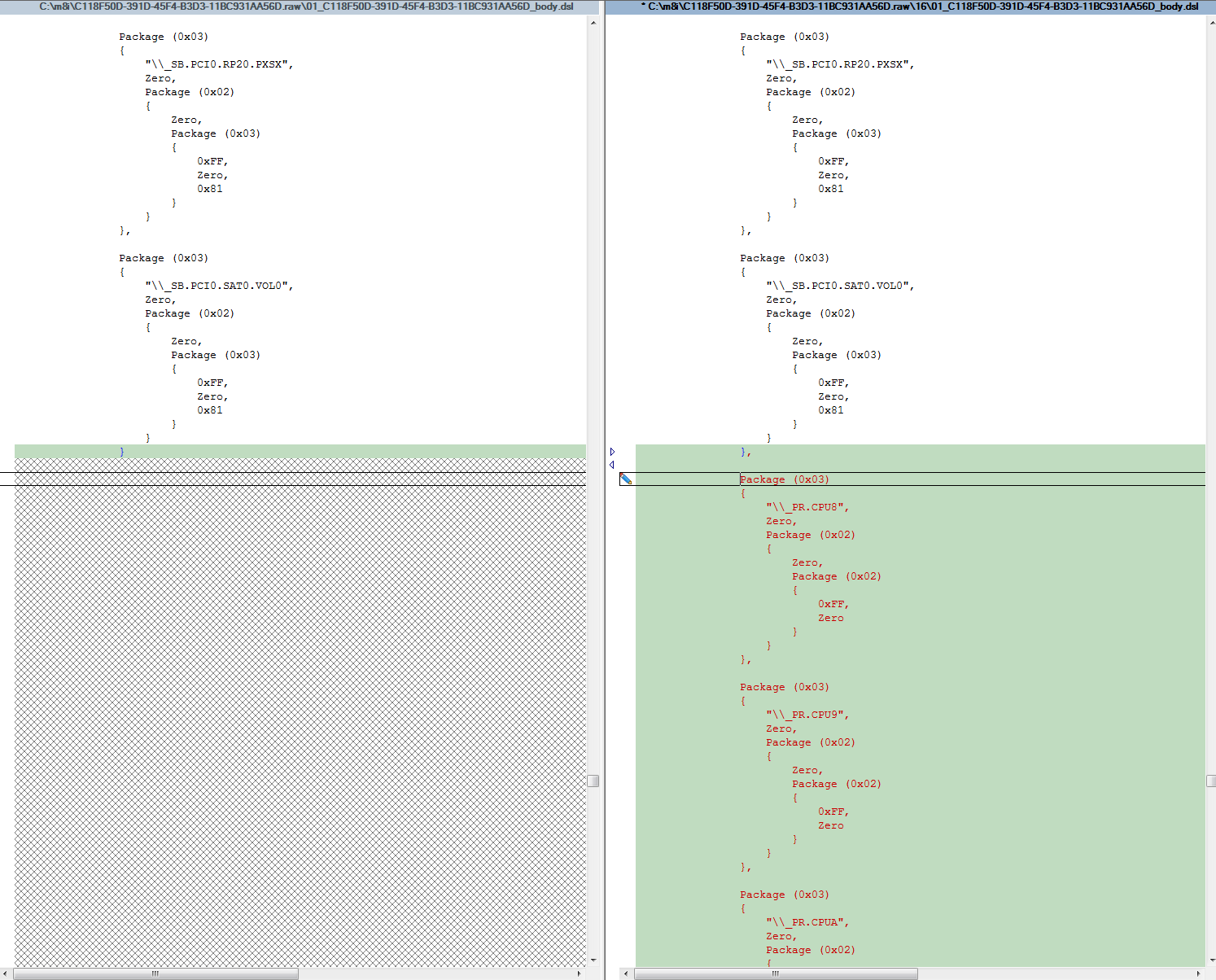 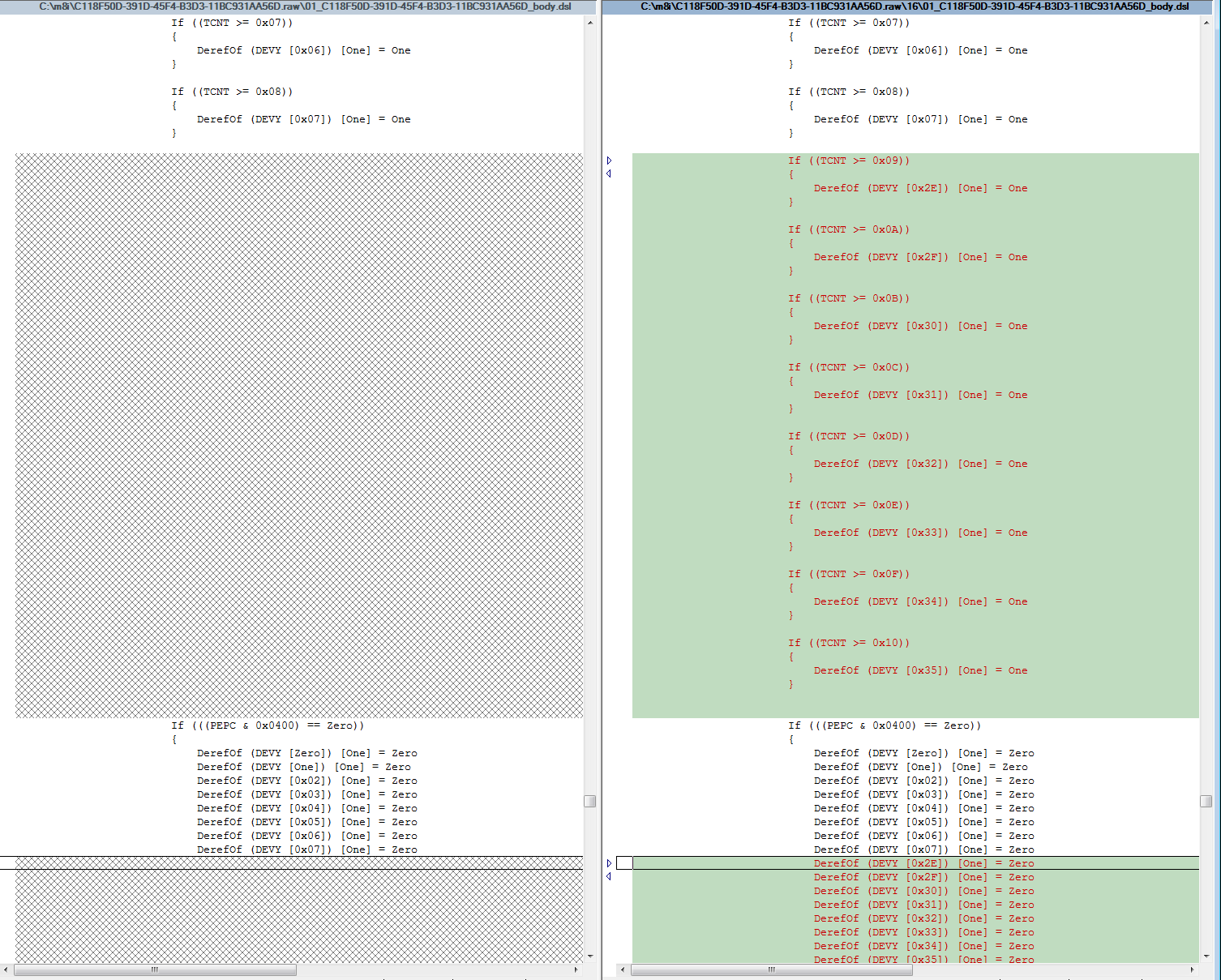 We execute iASL tool on the modifed tables (.dsl files) to get compiled version of the tables (.aml files): 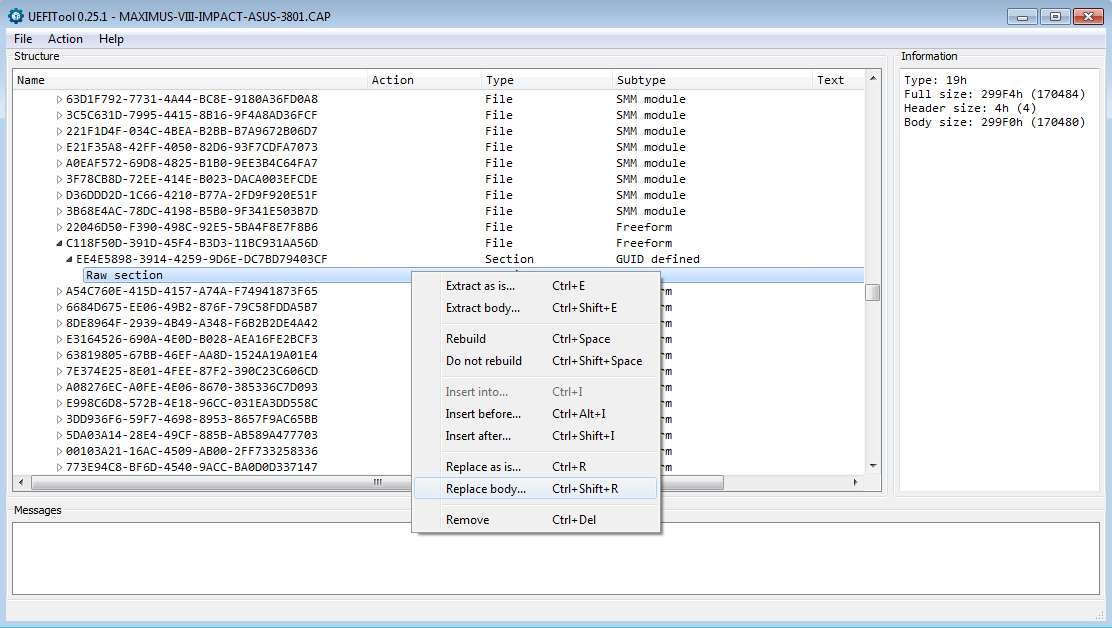 Save the BIOS file and flash. Software flash method (ASUS Flashback) is sufficient, hardware/SPI flashing is not required.

Power management in operating system (Windows) should work now. If we get BSOD, after resuming from standby, or the CPU multiplier is locked to base frequency (no Turbo mode) - in load, then we probaly made some error in fixing ACPI tables. 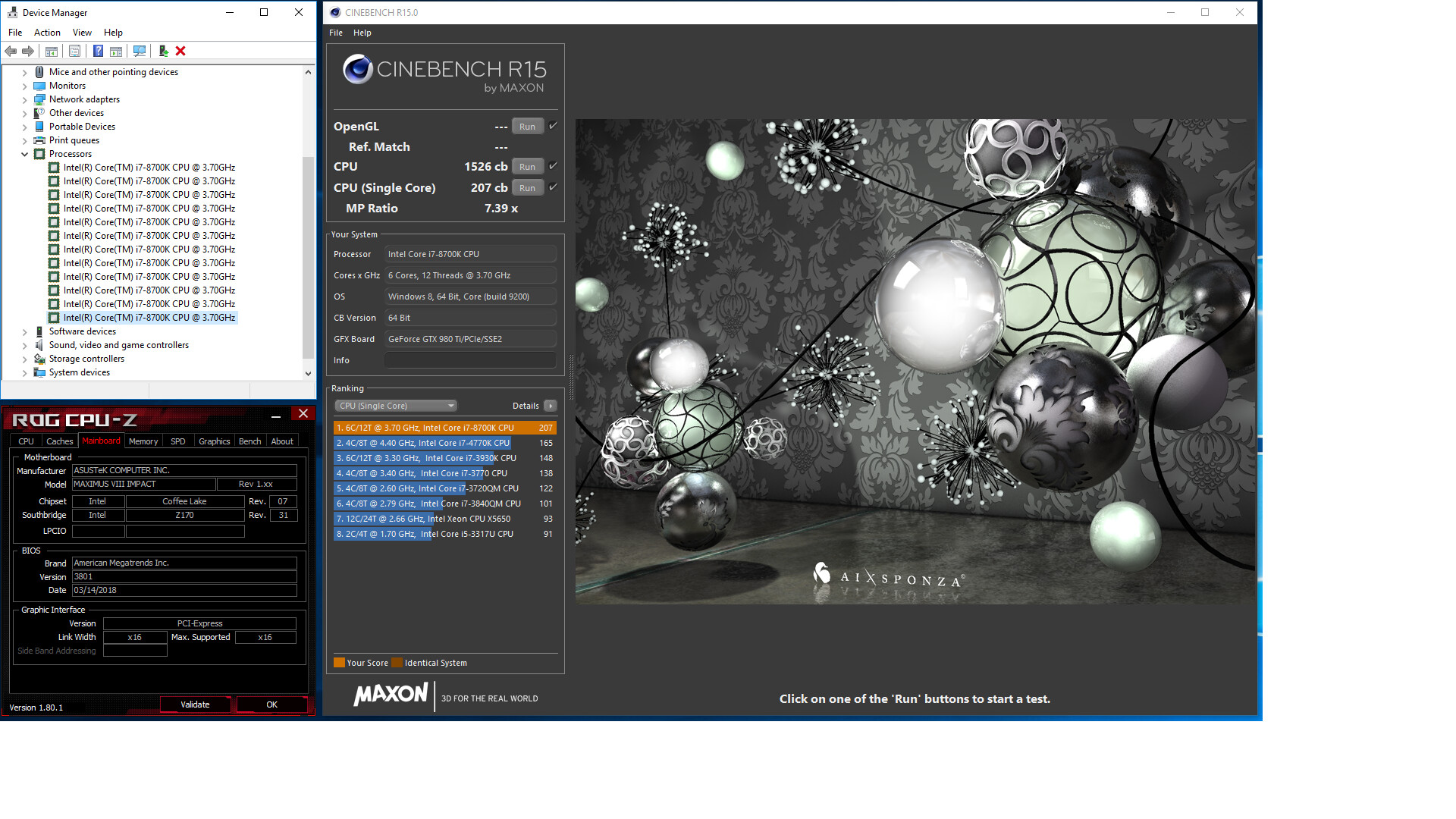 Power management - downclocking/downvolting is also working (with 8700K it can save you cca 10W when idle):

Great thanks to @s.napi !
Succeed in fixing my Gigabyte B150M DS3H DDR3 .
I didn’t do the DSDT fix , so the CPU numbers in Device Manager is abnormal. 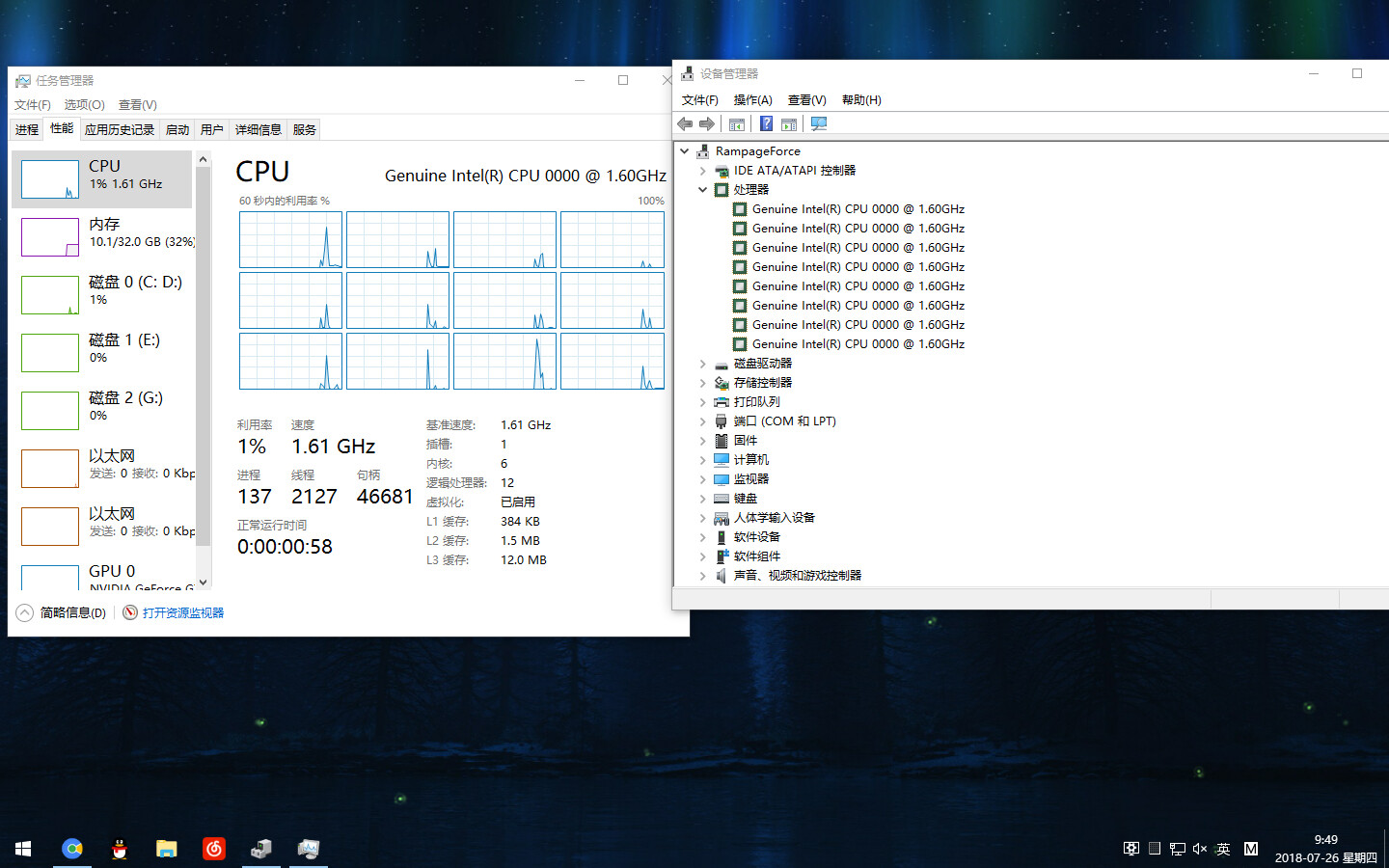 Can you get the CPU to other frequencies/is turbo mode working? Any problems with system stability (BSOD after resume from sleep)?

Can you get the CPU to other frequencies/is turbo mode working? Any problems with system stability (BSOD after resume from sleep)?

In this Gigabyte motherboard , no stability problems at all. And CPU Turbo is normal , just shows in Task Manager abnormally.

In other manufacturer motherboard , turbo boost is lost .But if I set Boot performance mode to Turbo Performance , and turbo boost will resume work.
No BSOD after resume from sleep too.

Now I found other problems : Freq showed in Task Manager always Non-Turbo freq , and it wont change . So Windows Task Manager will calculate CPU load incorrectly .And the uncore ratio is locked to highest 28x.(When I use BIOS port from Z370 , it can become 31x, my CPU is QN8J , it support single turbo to 36x and hexa core turbo to 31x.)
I don’t know whehter they are related to ACPI tables , I will fix my ACPI tables and check again.

congratulations. very impressive what you did.

€dit: can you name a dissasembler tool for windows? only tool that I can found, and able to use it, was an online dissasembler.

Congratulations, very impressive work!
One question - after the mod, are the core ratio multiplier settings for core 5 and 6 now visible in bios? Or is it the case that just as before only 4 cores are adjustable, however syncing all cores syncs the set multiplier speed also on cores 5 and 6?
Can you also upload you ready modded bios?
I also have M8I but with i5-8600k and would love to give it a try.

@ziddey would it be possible to insert a module from another mainboard to get the core adjustment for all 6 cores working? For the asrock z170 mocf there is a patched bios out with the possibility to change all 6 cores. I didn´t know how it´s coded into the bios, so maybe my question is stupid.

@mtothaj , @oldirdey , @ziddey
Actually, there is also fix for sync all cores (for M8I). You can’t choose ratio for 4,5,6 cores individually, in BIOS, but if you choose “Sync All Cores”, all cores will be synced now. It will work from one up to eight cores. One byte patch in module C654E340-2DB5-4896-BBC4-6EA45CFEB434. Here is a link to patched (16 cpu Coffee Lake compatible) M8I (v3801) BIOS capsule. Use Flashback method. Presence of Coffee Lake compatible BIOS (or at least ME region) is required - Flashback will not flash ME region.

EDIT: Finally I succeeded using bios flashback - for some reason ‘problem’ was with pendrive - the branded ones like Adata or Kingston did not want to work (tried 4 different ones from reputable brands) but the cheapest, nastiest one I had ended up working fine.
Bios works great with i5-8600k - All core enhancement syncs all 6 cores so no more need to use XTU. Many thanks for this

I understand that in future it will be necessary to add new microcode of the 9 gen CPU’s like i9-9900k etc assuming there will be no new hurdles / obstacles stoping them from working on older boards.

I had the same problem a time ago. But I can’t remember what the cause was now (usb disk in wrong port, bad format of cap file…). Anyway, you can use any other software flash method (afudos, afuwin…). In case of SPI flashing, dont forget to replace BIOS header/ME region of posted BIOS file.

@s.napi awesome thank you. I compared the ocmr_pei modules and see that you’ve changed one byte from F4 to F0. I found the same pattern in my bios (asus z170 pro gaming/aura) and will give it a change as well. Can you explain what’s actually going on here?

Thanks to @s.napi again ,you have saved ASUS old motherboards.
Could you please help me have a look at other manufacturer’s motherboard and BIOS?
I can’t find such module like ASUS.

Thank you very much for s.napi !

Thanks to @s.napi again and again , I finally got sync all core ratio work on BIOSTAR motherboard and MSI laptop.

I succeeded using your guide @s.napi and modded the coffeelake bios provided by mtothaj. Still need to test the coffee lake cpu but I think it will work like the celeron I am using now for testing the bios.

But how did you get the .raw file, that you mentioned in Point 2.1 / 2.2 of your Guide, extracted? I was not able to extract them in that specific format so I used your attached files for compiling them in Point 2.4 of your Guide.

Use uefitool for extracting. If you have M8I board, and already compatible ME region flashed, you can use already modded bios from post #11.