[GUIDE] How to get Win7 clean installed onto an NVMe SSD

Introduction:
Contrary to the newer Windows Operating Systems neither Windows 7 nor Windows Server 2008 natively do support NVMe. This means, that the NVMe SSD will not be detected at all by the OS Setup routine of the untouched ISO files.
This problem can be solved either by loading a matching SSD specific NVMe driver (if such driver is available) at the beginning of the OS installation (when the Setup asks for the target system disk drive, but doesn’t show the NVMe SSD) or by integrating a special MS NVMe Hotfix into the install.wim and boot.wim images of the desired Windows OS.
Since Microsoft doesn’t offer this NVMe Hotfix anymore (although it still works), I have written this short guide.

Important note:
Cloning of a previously SATA connected system drive is not recommmended and not supported by me!

Attention: Before you continue, read >this<!

A. Loading the NVMe driver during the OS Setup:

Provided, that your NVMe SSD has been manufactured by a Company, which offers a usable Win7 compatible NVMe driver for your specific NVMe SSD, I recommend to load this driver, when the Setup asks for the target system drive, but doesn’t show the NVMe SSD.

B. Integration of a suitable NVMe driver or the MS NVMe Hotfix into the OS ISO file:

The NVMe driver resp. the MS NVMe Hotfix has to be integrated into the boot.wim and the install.wim of the desired OS Edition. Otherwise the NVMe SSD will not be detected by the OS Setup at the beginning of the OS installation.
The easiest and safest way is to let a tool like NTLite do the job (the free version will support it).
Alternatively you can do it manually as well. >Here< is the related guide, which is offered by Microsoft.


Options after having completed the OS installation:

Once the OS installation onto your NVMe SSD is completed and everything is running fine, you can test other NVMe drivers (even mod+signed ones) and compare them with the one you had loaded/integrated before. Don’t forget to set a restore point, before you do that.
Tip: If to want to manually replace the in-use NVMe driver, you have to update the driver for the NVMe Controller, which is listed within the “Storage Controllers” section of the Device Manager. Don’t try to update the MS in-box driver for your SSD, which is listed within the "Disk Drives"section!

Good Day to all!

I am struggling to install windows 7 on this SSD. I am able to boot it on WinPE however, it fails to detect the drive which is a LENSE20512GMSP34MEAT2TA.

Before, I was able to install windows 7 on known brands of SSD by following the guide in this forum entitled as "Recommended AHCI/RAID and NVMe Drivers".

I have attached the photo of the SSD installed on a T470p laptop.

@boanerges1 :
Welcome to the Win-RAID Forum!

It seems, that the SSD, which is not detected by the Win7 Setup, uses the NVMe protocol, which is natively not supported by Win7.
So you have to load or integrate a matching NVMe driver, which supports the specific NVMe Controller of your Lenovo SSD.
I recommend to install Win10 for test purposes onto the SSD and then to check the HardwareIDs of the NVMe Controller. It is listed within the “Storage Controlles” section of the Device Manager.
After having done that, you can search for a suitable NVMe driver and restart the Win7 installation.

I have installed a win 7 in that drive. You can create a win7 dvd installation with these steps: https://support.microsoft.com/en-us/help…indows-7-and-wi

My problem how to to create a WinPe 7 with nvme support(I Tried the mentioned method but fails), We use a winpe for clonning machines and the winpe doesn’t recognise the nvme drive. Our system can’t use a winpe 10.

Anybody knows the solution?

I am struggling to find a compatible nvme drivers for it. *Still seraching…

I got it from “Device Manager>Storage Controllers>Standard NVM Express Controller” not sure if I am looking at the right one.

Here’s a snapshot of it. 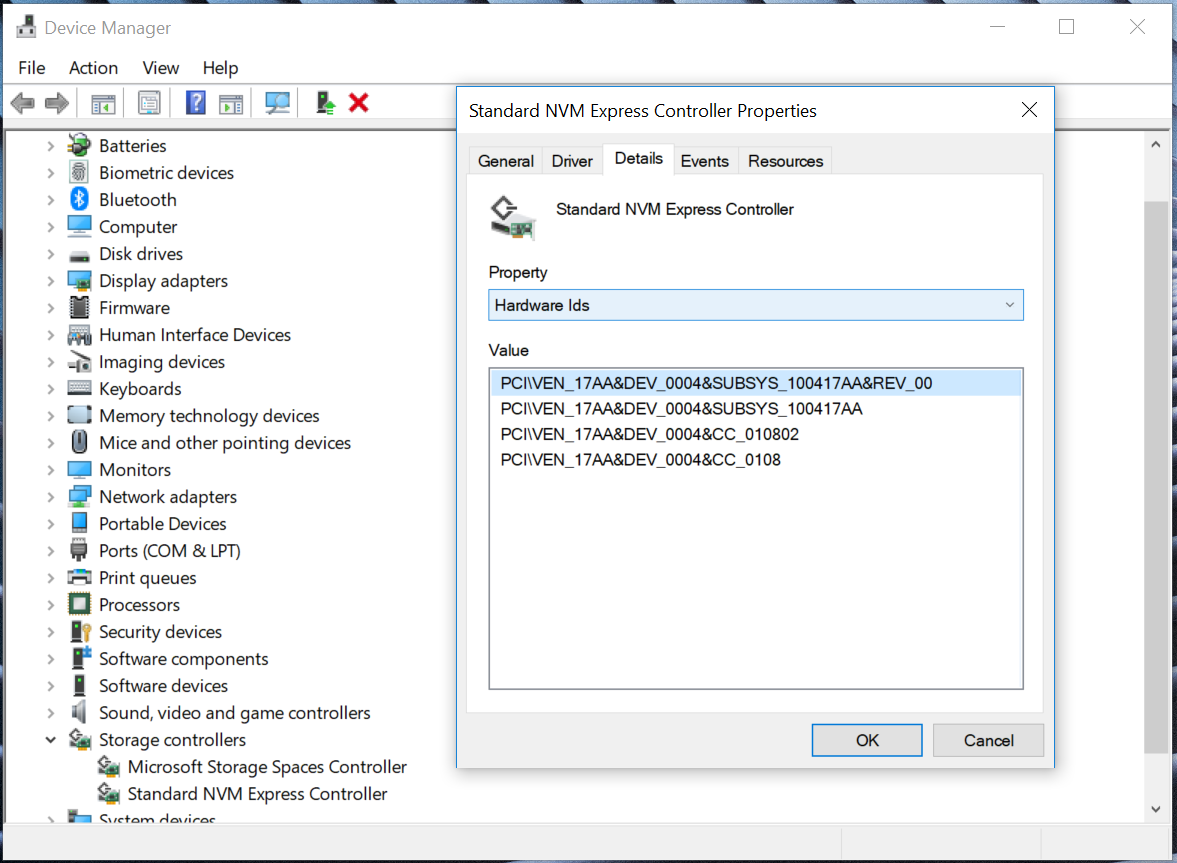 @boanerges:
Ok, thanks for the verification. So the posted HardwareIDs are indeed those of the NVMe Controller and not of the SSD itself.
AFAIK the only NVMe driver, which will support this NVMe Controller, is the Win10 in-box one resp. the related Hotfix, which has been delivered by MS for being used with Win7.
By the way - I have never seen such HardwareIDs. Who is the manufacturer of the SSD?

Who is the manufacturer of the SSD?

I think I was able to apply the hotfix that you are saying in my Windows 7 setup, it is now detecting my nvme SSD, however I am unable to select it as it is asking for a driver. I believe this is where I should select the correct driver for my nvme controller.
https://support.microsoft.com/en-us/help…indows-7-and-wi

I would like to install Windows 7 on the HP SSD EX900 M.2 500GB.
I already created a partition on the drive and can use it as storage.

When I’m trying to install Windows 7 on the device it says the following after selecting the partition:
"Windows kann auf dem Datenträger nicht installiert werden. Der Treiber für das Gerät [Standardmäßiger NVM Express-Controller] ist erforderlich."
Which basically means that windows can’t be installed because it requires a driver for the NVME controller.

I was looking for drivers at HPs website and on this thread but couldn’t find any: Recommended AHCI/RAID and NVMe Drivers

Does anyone have an idea where to find the required drivers or how to tackle this problem otherwise?

@Fernando has attached this hotfix driver somewhere here, but I can’t find it. I checked all NVME thread main posts, no luck.
Fernando, when you do attach or link again, can you maybe attach also to the best related NVME driver thread’s first post so it’s easier for people to find (Unless it already is, and I missed it

@Lost_N_BIOS :
The MS NVMe Hotfix for Win7 had been attached to >this< post.
To make it easier for the Forum users to find the download link, I will add it to the start post of >this< thread.

@JoghurtDipper - driver you wanted is linked above

Thanks a lot guys.

You’re welcome @JoghurtDipper Hope you get it sorted out now!

Hello to everyone
For the last few days I have a problem with which I struggle.
I upgraded my desktop PC with KXG50ZNV256GB NVME drive. Drive is connected to MB via PCIE adapter. I managed to make this drive visible from my current Windows 7 (64) system. My BIOS/UEFI doesnt’ support NVME, but after some modding i managed to get drive bootable when partition sheme is GPT and ESP partition is present (for example I can boot Linux this way).
My intention is to clone my exsisting Windows system do the new drive. Unfortunatelly i can’t do direct cloning because i have my system installed on MBR partiotion scheme with only one primary partition. Although BIOS is able to boot system from ESP partition there is no way to do “legacy boot”.
Is there any way to convert partition scheme from MBR to GPT, ad to create correct ESP partition without Windows reinstallation?
Or maybe there is a solution involving thirt party loaders like grub or clover? Is it possible to reach MBR partiotion on NVME drive from bootloader residing on another drive, and somehow chainload Windows boot files?

It is also very annoying that i can’t do fresh install. Windows installer doesn’t see the drive. Intergration of Hotfix KB2990941-v3 doesn’t help at all, and I am aslo unable to give the installer correct drivers, because there are not signed correctly. I am able to use this drivers when I am using recovery console, but not to installation itself.

Thank you in advance for your help and best regards

It is possible to install Win7 on an NVME SSD. Do you know about the hotfixes for Win 7 that give it native NVME support? If not, search this thread. I’d link, but I am thumbing away on an iPad. Or search internet in general for them. Likely, you will end up back on this thread.

While I somehow managed to work with the DISM tool to update my Win 7 install ISO with the service pack “2” rollup, I have failed several times to add the NVME hotfixes to the ISO. I have tried following this MS page, but some steps failed even though I had followed the instructions perfectly. As I am only a cut-and-paster, I haven’t a clue what went wrong.

Sooo, is there somewhere that I could download a fully updated, including NVME hotfixes and drivers and USB 3.0 drivers, Windows 7 Pro 64-bit ISO?

is there somewhere that I could download a fully updated, including NVME hotfixes and drivers and USB 3.0 drivers, Windows 7 Pro 64-bit ISO?

If there is, I wouldn’t trust it.

Sometimes copying and pasting won’t work. Like when the tutorial is using a different version of Windows 7 than you have. Then you have to modify the text appropriately. Did you try the link I gave you before to the Winaero.com tutorial? I have the Microsoft link and the Winaero link saved, but I don’t recall which one I used. Also, I don’t think integrating the USB3.0 drivers into the ISO is going to do you any good. The Windows 7 installer on the USB3.0 flash drive will get you to the point of selecting a partition to install to, but will no longer be able to read from the USB3.0 flash drive with the ISO that the USB3.0 drivers were integrated into. I have had to use a separate USB2.0 flash drive for the USB3.0 drivers and the Samsung NVMe driver. If you find another way to make it work, let me know.

I cut and paste DISM commands into cmd because I haven’t been a coder for 40 years. And then it was peek and poke! I will check the Winaero.com tutorial and try to familiarize myself with the process.

I never thought I’d say it, but Windows 10 is looking like an alternative.