Hello, i’m new here, and I have a 300 series motherboard lying around, and want to upgrade to it, but I don’t have a cofee lake cpu to use it, so I wanted to add kaby lake support to it, if anyone could help me achieve the mod, or even do it for me, I would be thankful, i’m sorry if I’m posting this on the wrong place, and thanks for any help.

@PinaTryhard2000 - maybe not possible, what is your Kaby CPU? Do you have flash programmer, if not then you may be best not trying this, you need to edit and swap out many modules

I have both an i5 7400, and an i3 6100, but the i3 has shown signs of instability, even on regular, working boards, and yes, I do have a programmer, just don’t know where the bios chip is located.

Send your i3-6100 back to Intel for RMA, you’ll have a new one in two weeks or less. Neither of those CPU’s microcodes are in the BIOS, so you’d have to add that, downgrade vBIOS/GOP, and possibly ME too, that’s at a minimum.

For BIOS location, I can’t find any good images of the board, you’ll have to zip some up for me. I think BIOS may be under last PCI/PCIE port, but can’t tell in all images I find online they’re too small and no good ones in any reviews.

The i3 alredy has like 2/3 years, and about the bios, could you link me to a detailed tutorial on how to do said changes

Only understood by now that you wanted an image of the motherboard, here it is
https://drive.google.com/file/d/1PvWrvpN…ew?usp=drivesdk

I was able to add support to coffee lake on an msi h110 with perfect support(except it being very hot with an i7), using the tutorial from elisw, it it that hard to do the other way around? Being that I can power on the board with an i7 8700, i can make a modded bios, the programmer wont be a solution, because it’s almost for sure soldered, and I don’t have that like clip to attach to a soldered bios.

@PinaTryhard2000 - Intel has 3 year RMA I think, or at least used to, check your invoice date and then chat them up it’s easy. Happy Late New Year, it’s a thing now!

There is some guides here in the BIOS section on how to do some/all of that but a lot of the good info is probably spread around deep in threads. It’s not hard, but it’s also just a guess/try thing, most people do not do it “The other way around”, so there’s not much documentation or success stories that I’ve seen.

Yes, you need a SOIC8 test clip (Only $2.50 on ebay, let me know if you need link), but I still can’t see BIOS in your image it’s too blurry. Take more images on a table in a brightly lit room no flash
I think “Maybe” it’s this one, but I can’t tell if that is BIOS or mosfet chip due to blurred image and poor lighting 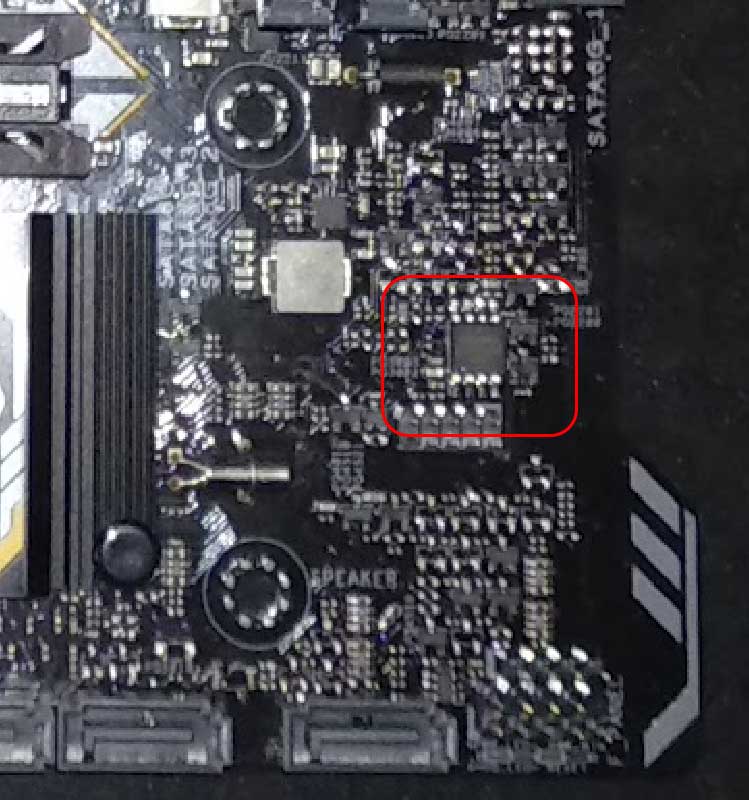 Sure, i’m not too confortable buying things from random sites, unless it’s recommended from someone that has (possibly) bought from said website, about the bios, it looks to be the bios chip, but there is another chip that looks like that, one question, there is no problem placing the test chip on the wrong chip?

Hmm, i might just have found out the problem with the i3, i just found 3 bent cpu pins on my msi h110 pro-vh(the motherboard I use for testing some cpus) and straithened them, and after that, the cpu showed no signs of instability after 2 hours of stress testing, and finally keeps it’s stock 3.7GHz without a problem. An odd thing is that when I installed the i7 8700k, to test the modded BIOS, it worked very well, doing a 30 min stress test showed some trottling, because I used a stock cooler, but nothing too bad. Also, can’t I just do how I did with the h110 motherboard, where I just added support to a coffee lake cpu modding my bios, and flasing it regularly like a bios update?

Ebay is not a random site? I’ve purchased from there, 100’s of shops in China over the past 10+ years, maybe 1-2 lost items out of 100’s, and when that happens they refund or resend.

Show me better images and I will be able to tell you for sure what’s what. And for putting a clip on any chip, yes you can safely do that, as long as you only read/verify/save. That’s how you find out what is on any chip when you are not sure.

Good you were able to correct the bent pins, maybe that was issue with the other CPU too and you didn’t notice those pins then? Your last question I do no understand?
If you mean using Coffee lake tools (AIO Tools) to make Kaby support, no that wont work. It can all be done manually, several edits as mentioned, but may not be successful, I’ve only seen few ask over the past year or two about this kind of downgrade, and seen no success reports.

Is such a mod possible, and works? Coffee board mod to support >> Kaby CPU (Or Sky/Haswell)

Yes it’s possible on Z370, you need to use ME firmware v11 and remove all remnants of v12.

A lot of Z370 BIOS already have Skylake/Kabylake microcodes but you’d have to check your specific BIOS.

Also the board might boot at high vcore on Auto (i.e. ~1.50 V) so you’d want to change that in BIOS pretty quick.

So, what you’re saying is that I MAY be able to boot a kaby lake cpu, only be downgrading the ME firmware? I did saw 3 cpu microcodes using UBU, but not sure if they are the skylake, kabylake and coffeelake microcodes

@chinobino Thanks! So, what does "All remnants" of V12 mean, I know how to edit/modify/transfer settings/swap out ME etc, but unsure what you mean by all remnants, is there something other than the ME region that needs addressed regarding ME
So, no changes to other modules, GOP/vBIOS need done, aside from ME/Microcodes?
Thanks for the links and tips too

May need to pad out ME Region to remove all remnants due to size difference.

As I said previously, the BIOS does have several micro-codes, 2 on the first BIOS, and 3 on the latest bios, because of the new cpu support, just don’t know if any of those is the kaby lake, or sky lake micro codes
[[File:Sem Título.png|none|auto]]
[[File:a.png|none|auto]]
And here are both the first and the latest BIOS micro-codes

You need to have these for Skylake/Kabylake;

So, what you’re saying is that it isn’t going to be as easy as downgrading ME, feels bad

@PinaTryhard2000 - no worries about microcodes on my end, I didn’t mention because that’s an easy given for me. I do need to know your exact Kaby CPU though, to be sure that one is in the BIOS I make for you.
Yes, it will be easy, don’t worry! Please get me some new clear images of your board, in bright room without flash, so I can tell you which chip is the BIOS, unless you have already dumped a few and ID’d it by contents.
Please send me a dump of your current BIOS, from the programmer (Or entire BIOS dump via FPT, if you have already unlocked your FD)

Thanks @chinobino ! I’ll build both, padded and unpadded in case it matters or not to bootup.