Hello,
following the installation of my SATA card (88SE9230 Rev 1.0) having as information 1b4b: 9215.
Under Windows 10, the card works abnormally and intermittently.

Read this for example.

Do you know which revision you have? A0 or A1?

You can get the revision from the Marvell Storage Utility (i.e. Chip Revision ID).

Hello,
I inserted the card under an architecture using an Intel chipset to be able to retrieve the information, I joined you a screenshoot.

1) Could you explain to me which flash tool he uses in the links you give me because I have not really entered ?

2) I noticed a shell script in the folder:

Hello,
I inserted the card under an architecture using an Intel chipset to be able to retrieve the information, I joined you a screenshoot.

Thanks for the screenshot, I can see your Chip Revision Id = 11, so you’ll need to use the A1 image.

There are two tools that can update the firmware.

The first flash tool is called mvf_mag.exe and is executed from MSDOS only (I use a DOS bootable USB stick created by Windows 7 IIRC). Note that FREEDOS will not work.

You will need to run the script ‘go.bat’ to flash the newer firmware.

It would be a really good idea to make a backup of your card’s EEPROM before you attempt to flash anything! (You can do this with the ‘go -ra’ command)

You will also need the file ‘spilist.bin’ so the EEPROM will be recognised.

All 3 files are hosted at Supermicro’s ftp site.

You should also keep the folder structure the same as ftp site, put go.bat on your USB stick’s root directory and put mvf_mag.exe, spilist.bin, and ImageA1.bin into a folder called ‘bin’ otherwise the batch script won’t work.

Zitat von dexter74 im Beitrag #32) I noticed a shell script in the folder:

The second flash tool is called mvf.efi and should be run from a UEFI shell - I am unaware of any firmware tool for Linux for the Marvell Magni, Magni-Lite, Magni HyperDuo or MagniPlus chipsets.

I used this UEFI shell which is for a 64-bit UEFI.

You will need to rename Shell_Full.efi to BOOTX64.efi

You will also need to create 2 folders on a USB stick;

And then boot in UEFI mode from your USB stick

The shell script 'go.nsh' is supposed to call on mvf.efi to read/write data from the EEPROM but I could never get it to work.

For some reason mvf.efi fails to see any SPI flash devices. I have tried several versions of 'spilist.bin' but it never worked for me, even calling mvf directly from the command line (the script looks ok).

Maybe you will have more luck.

You should probably also use the image creator (in this folder) to build a firmware image for the 9215 as it differs from the 9230 (i.e. No RAID, No Hyper Duo, No AES encryption support and PCIe x1 interface instead of x2) as I am unsure if you will have problems with the wrong flags enabled.

Hello,
I will start by installing Windows 7 on my bike, then recover the necessary files.

Yes, that is exactly what I suggested.

Hello,
Following the installation of Windows 7 x64, the software makes me the same error code.

Could you tell me how to flash it? (Under which operating system)

Tun the tool as Administrator (leave it on FAT32) and tick ‘Create a DOS startup disk…’ and browse to the MS-DOS folder that contains the 3 required MS-DOS files.

I have a problem when I take the file to download 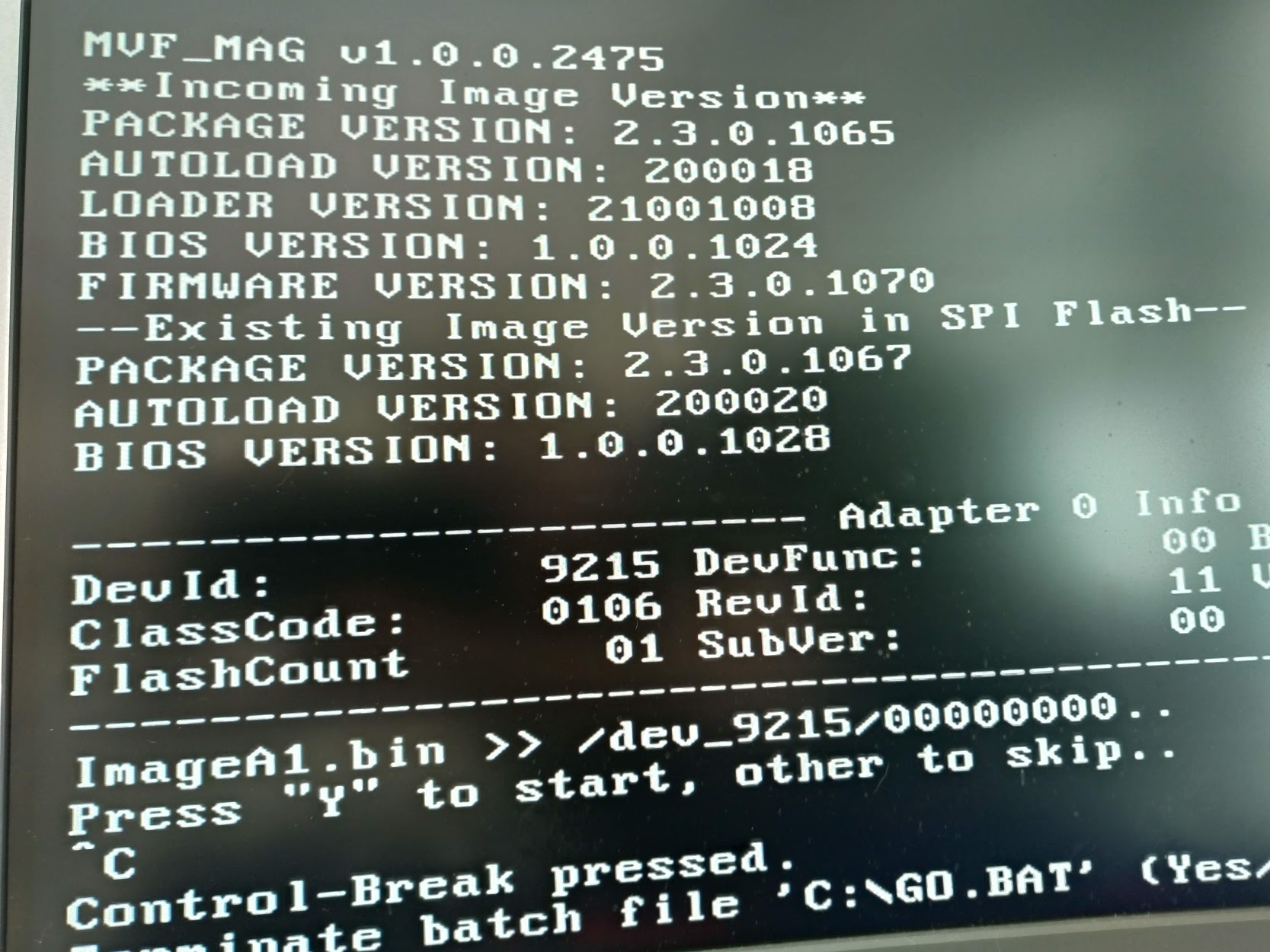 Your package includes the good bios?

The administrator to install the wftp tool to browse the FTP. (https://www.supermicro.com/wftp) (Racine ftp)

The flash succeeded but when I restart the PC, it refuses to start.

How can I reflash the map?

The flash succeeded but when I restart the PC, it refuses to start.

How can I reflash the map?

Please disable secure boot and fast boot in the BIOS.

Hello,
I’ll let you see if I’m wrong but I do not think so.

After flashing my computer refuses to start outright.

Resultat when i have flashed: 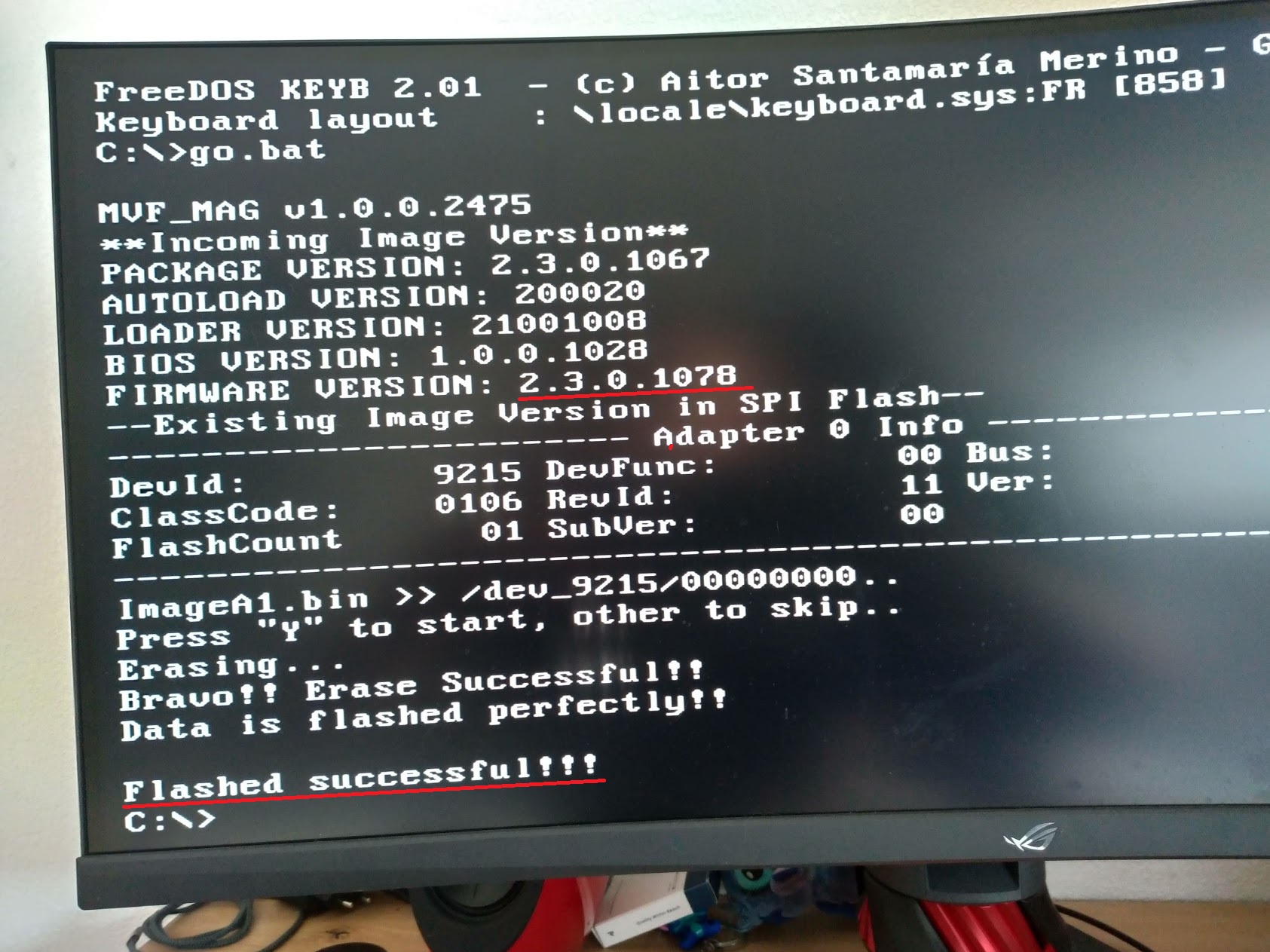 After flashing my computer refuses to start outright.

If you remove the 9215 PCIe card can you boot the PC normally into Windows 7?

When I remove the card the system is working normally.

You mentioned that it wasn’t working well in the first post, did it ever work properly?

Hello,
The card was working normally on my PC under intel

The problem is post-boot not related to Windows.

I do not think it’s defective.