Help to flash a modded BIOS in ASUS GL553VE

I set tcc activation offset to 3 with AMIBCP, so the PROCHOT will be 97 and dind’t change anything else.
When i try to flash my bios with Asus EZ Flash 3 Utility directly from my bios it fails but no error message, just operation failed. Then ı try to flash with AMIBIOS 8, selecting the file with AMIBIOS, then flash, the app froze and nothing happened.How can i flash my bios?

@Screta - Dump BIOS Region with Intel FPT, redo the mod to that BIOS region, then reflash your dumped modified BIOS region via FPT

Once downloaded, inside you will find Flash Programming Tool folder, and inside that a Windows or Win/Win32 folder. Select that Win folder, hold shift and press right click, choose open command window here (Not power shell).
At the command prompt type the following command and send me the created file to modify >> FPTw.exe -bios -d biosreg.bin

The biosreg.bin is your new BIOS to use, modify this same as you already did, then reflash using this command >> FPTw.exe -bios -f modbiosreg.bin

DO NOT Flash stock BIOS or CAP BIOS with FPT!!

If you want, I can unlock full BIOS for you

If you want that, please zip and attach your biosreg.bin and I will mod it for you

Thank you for helping but i don’t know how to do it >> Dump BIOS Region with Intel FPT, redo the mod to that BIOS region, then reflash your dumped modified BIOS region via FPT.

@Screta - I gave you directions on how to do that above, step by step. What do you not understand specifically? Do each thing I mentioned one step at a time, and then tell me where you get stuck.

FYI - what I mentioned above about not using CAP BIOS in FPT directly applies to this systems stock BIOS, it’s a capsuled BIOS with ### extension instead of CAP, but still CAP BIOS. Do not use the stock file at all with FPT

Hi to all.
I want to know my real type for this laptop because make me confused.
In my backdoor case laptops is showing GL553VD-FY280 and then i check in msinfo32 and dxdiag has showing system and bios model for GL553VE, and what im talking about is the bios for GL553VE chipset is the same as GL553VD or not?
Thanks in advance .
Waiting for reply.

@setya87 - Did you purchase the system new, or used? GL553VD and GL553VE use two different BIOS, DMI info is distinctly different per model (GL553VD or GL553VE) and FID (Flash ID) is different for each (mainly BIOS build time)
However BIOS ID/Tag is same, so it’s possible some software allowed you to flash incorrect BIOS, or at some time EZ update allowed you to flash wrong BIOS. Or, if you purchased used, then someone else before you may have done that, or bricked the BIOS and someone recovered it for them with incorrect BIOS.
So, you have VE BIOS flashed into your VD system. I am not sure what they differences between these models are, you’d have to compare or ask Asus directly. But for now, you use VE BIOS

@Lost_N_BIOS
This the photo’s of my laptops.
If you say between used or new,
Yeah, is the used one, but i’m still worried if i’m flash to GL553VD bios update is success or not, but the 1st users say is got an error : “Windows has stopped this device because it has reported problems” (code 43).
And different for between the models are :
- GL553VE with GTX1050Ti
- GL553VD with GTX1050 (non Ti)
And the others spesific are the same.
Just different base clock for gpu.

I want to flash from GL553VE bios to GL553VD bios is possible to do it?
If yes, please give me how to flash it because i’m using WinFlash cannot update cause different type bios.

And my 1st user laptops say’s they fault is using bios mod on windows software.
But, from this pic gaming center software is showing the CPU temperature is 43°C ??
The fact i’m saying is my CPU is fine or broken because error 43 showing?

can you explain and give the best solution to me?


@Lost_N_BIOS
This is the late for pic’s! 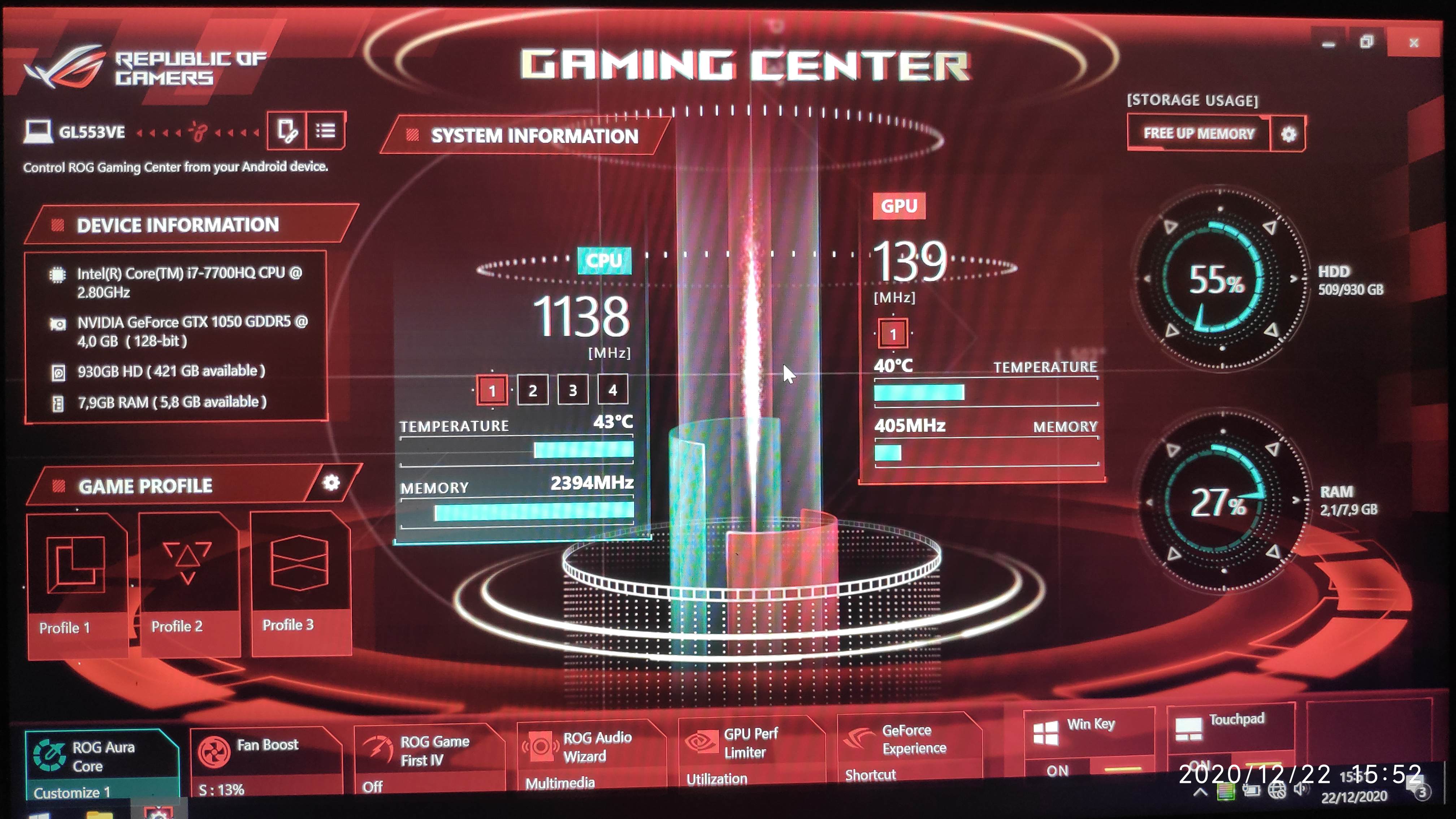 I want to ask again.
Has the GL533VE and GL553VD has same ME and EC version?
I’m checking on my bios he has showing ME version is 11.6 but igfx vbios is n/a ?
EC fw version is 00.00 in GL553VE on unlocked bios but EC version is showing in Main bios.
Is the ME, EC and igfx vbios has contain important information?
Here’s for the pic’s for my bios menu. 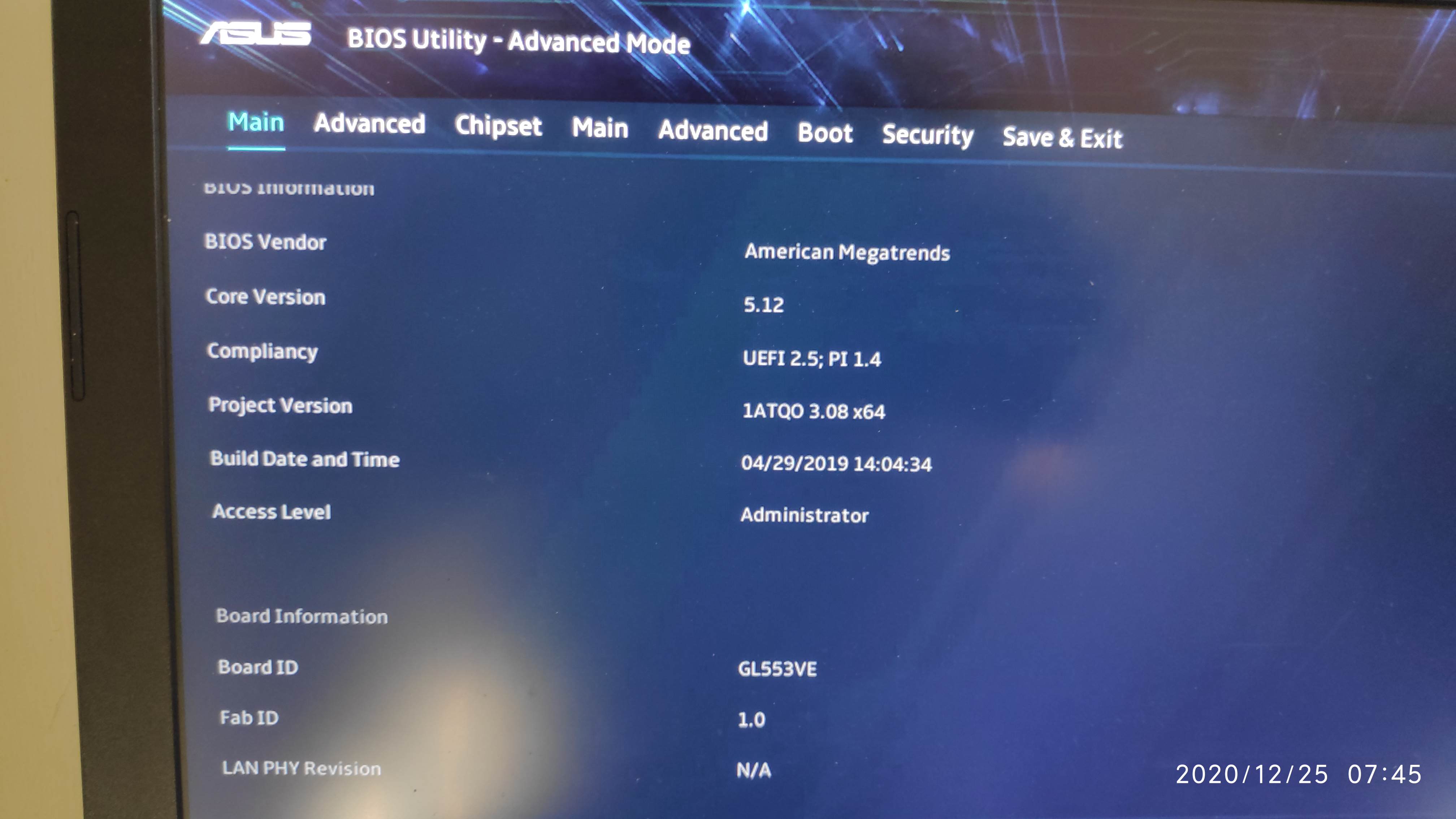 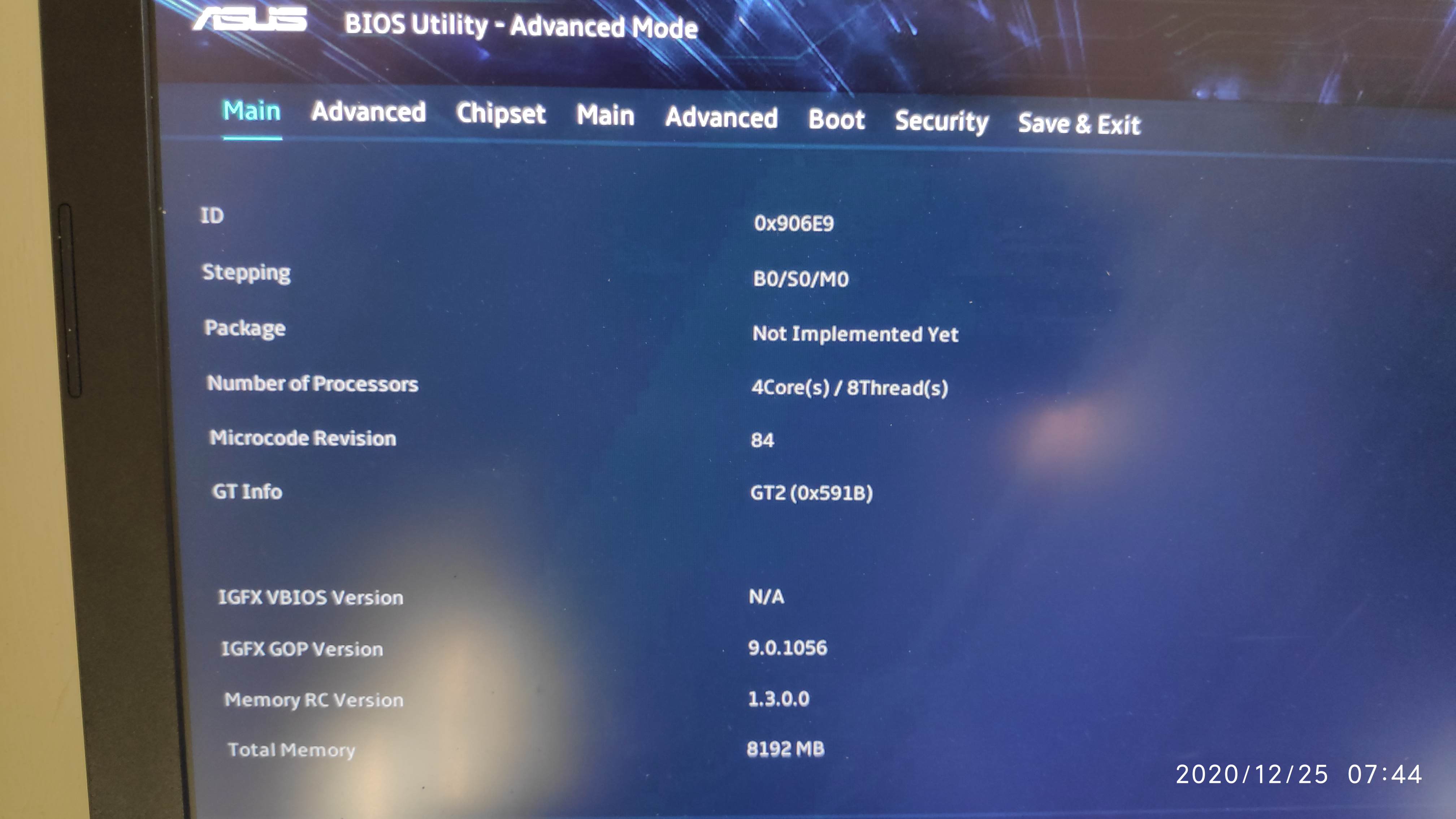 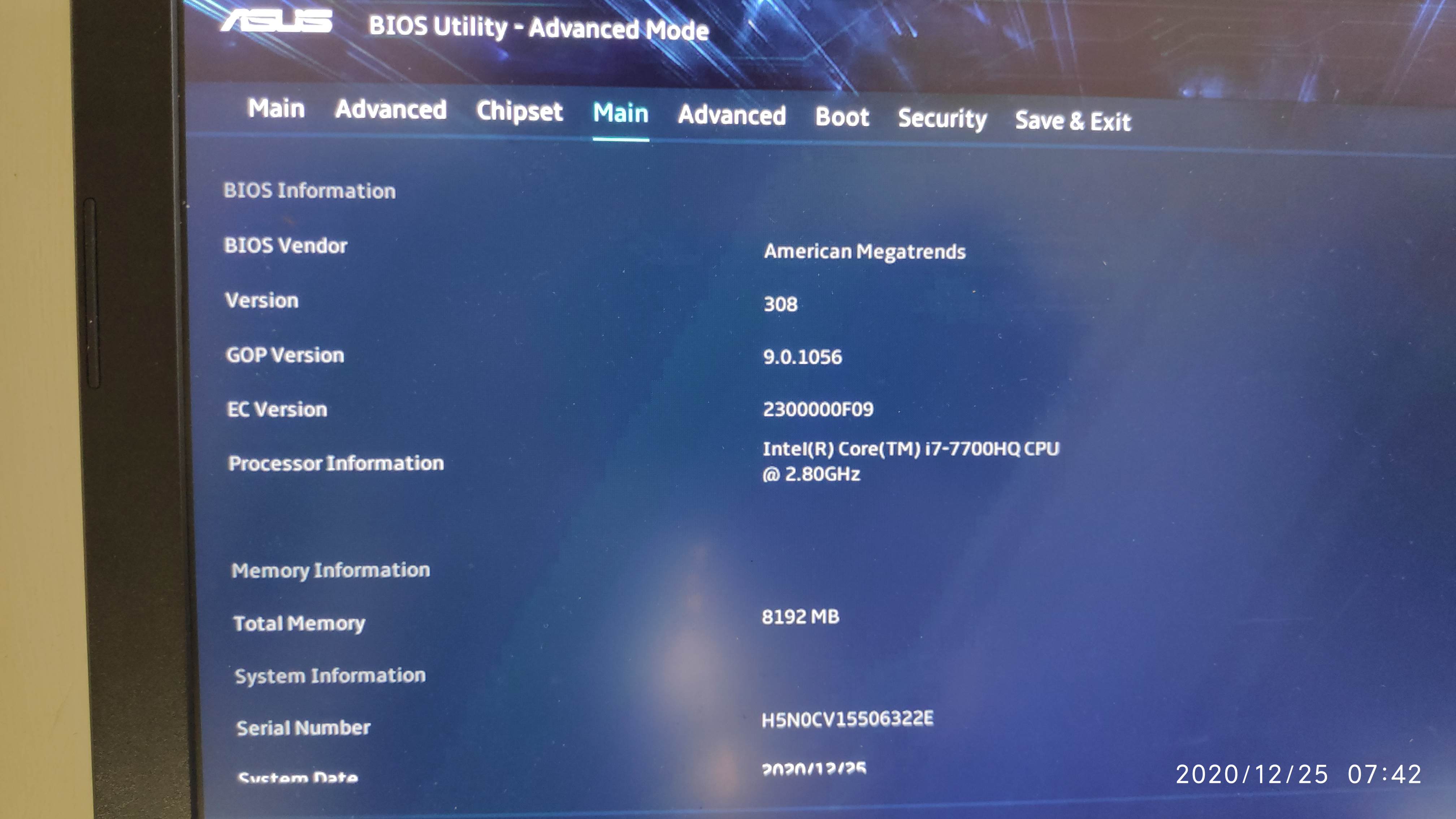 Sorry, your post is not very clear, I don’t understand some of what your trying to say (maybe translation issues?)
If you purchase used, then what I mentioned probably happened, someone flashed wrong BIOS or had it serviced by someone to recover BIOS from brick and those people put in wrong BIOS etc.

If you want to mod current model BIOS, and flash that back, that is best thing to do. You will need to dump BIOS region with FPT, edit it, disable any locks stopping you from flashing it back, then flash the mod BIOS back
If that is what you want to do, let me know and I will help you get that done

CPU temp of 43C sounds kinda normal for laptop
vBIOS would not be loaded or shown info, while you are in UEFI mode, due to GOP is used instead (hence N/A = Not Applicable / Does not apply)

Thank you so much for all the answers!
And yeah! My english grammar is bad. But i hope you can understand it.

Then this the important topic.
I need your guide for mod my bios from type GL553VE (my bios now) to GL553VD (my bios target flash), i can dump it my bios rom and send it to you for modyfying it to GL553VD bios ? Or i have to download stock bios for GL553VD in asus official firmware?

I need your help ASAP.
your answer is important to me because i have brightness issue for my laptop has not showing.

Hope you understand what im saying.
And focus on guide to mod my bios, i need more information to edit it on FPT.