There must be a reason why Windows is not able to detect the RAID array and its members (HDDs), but I cannot imagine any.

I am getting ready to reset my Windows 10. Before the RAID degraded Windows saw it fine, so maybe resetting it will allow it to be seen again. It’s a shot in the dark

BTW, Once I do reset Win10 which would be the best of your drivers to use

There must be a reason why Windows is not able to detect the RAID array and its members (HDDs), but I cannot imagine any.

OK so this is indeed a weird thing. I had room on my boot drive so I created another partition and installed windows 7 pro 64bit. As soon as it was installed I installed a set of your driver’s amd the computer rebooted a few times and is now in the process of rebuilding the RAID5. I don’t understand why or how it worked. I am going to try the same thing with Windows 10 either today or tomorrow and let you know how it turns out.

I had room on my boot drive so I created another partition and installed windows 7 pro 64bit. As soon as it was installed I installed a set of your driver’s amd the computer rebooted a few times and is now in the process of rebuilding the RAID5.

That is really surprising and good news.

I am going to try the same thing with Windows 10 either today or tomorrow and let you know how it turns out.

Yes, that would be fine.

BTW, Once I do reset Win10 which would be the best of your drivers to use

For your nForce 780i RAID system I recommend to take the “Special nForce RAID Driverpack”, but don’t forget to import the Digital Signature Certificate according >this< guide before you are going to install it.

I reinstalled Windows 10 and grabbed some screen shots of my drive configuration and Device Manager. I installed all your drivers but windows changed them to the windows drivers…this has been a battle I have not been able to keep your digitally signed drivers installed. If I try to change them back to your drivers the RAID disappears and is no longer seen. I reinstalled Windows 4 times yesterday…needless to say I am getting to be an expert ant installing Windows. Some of this makes NO sense still…but so far so good.

Here are the shots…first is the RAID NOT enabled in BIOS: 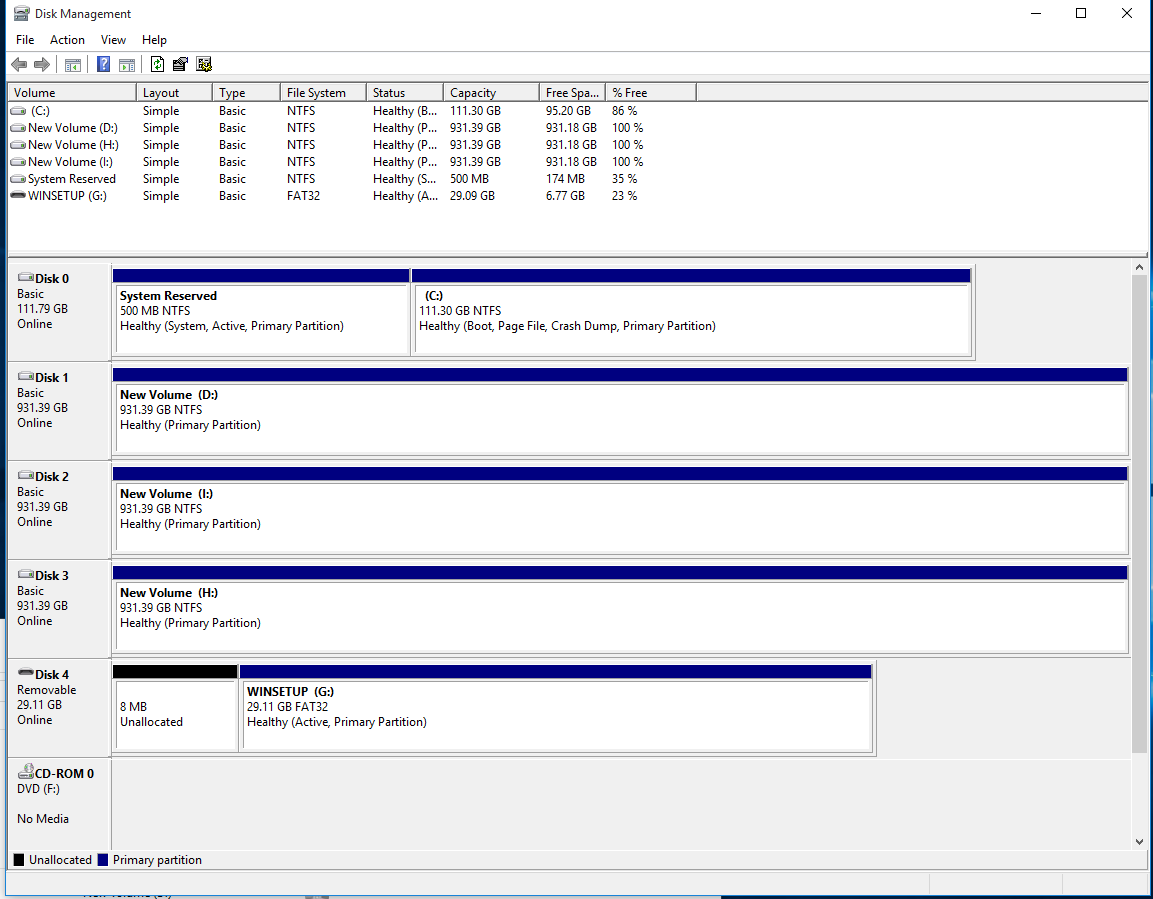 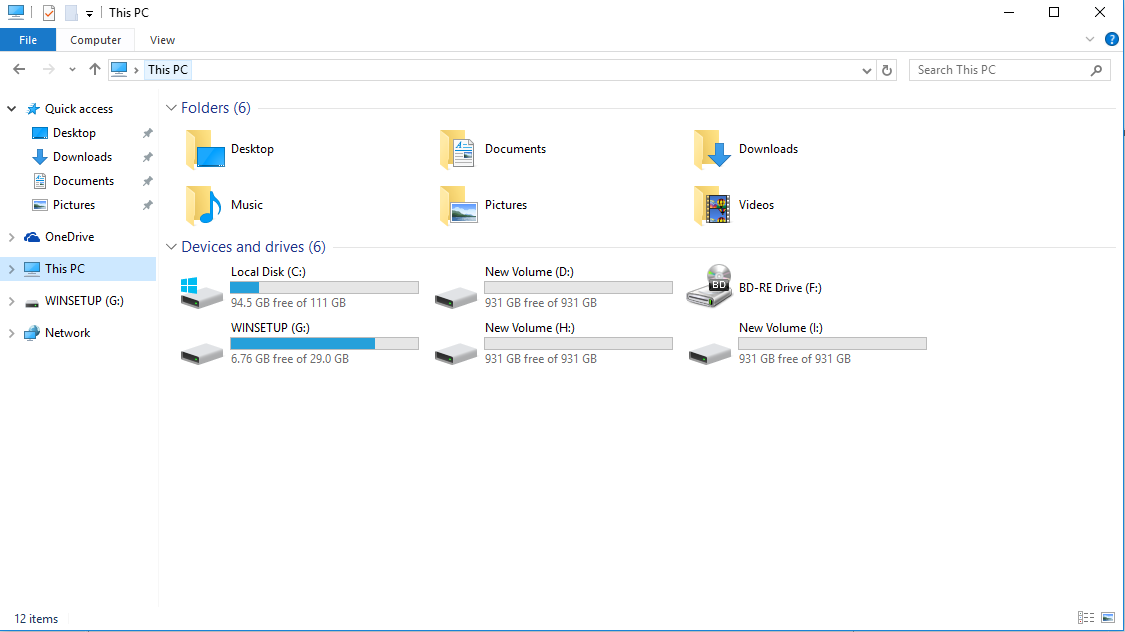 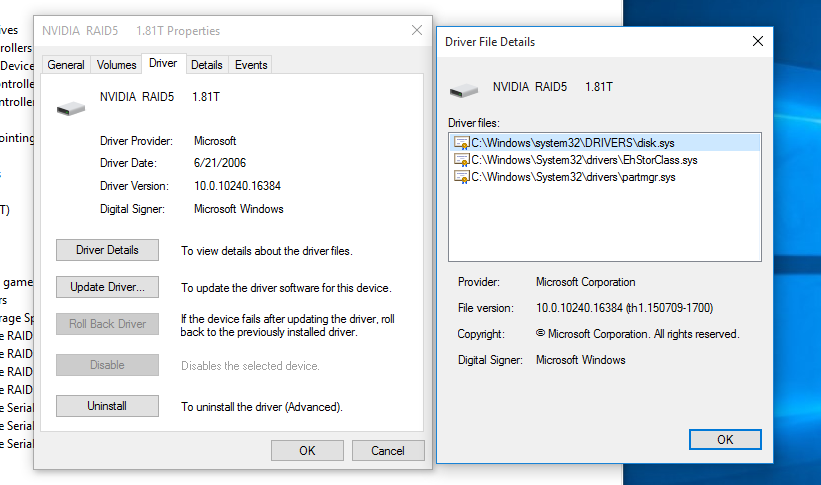 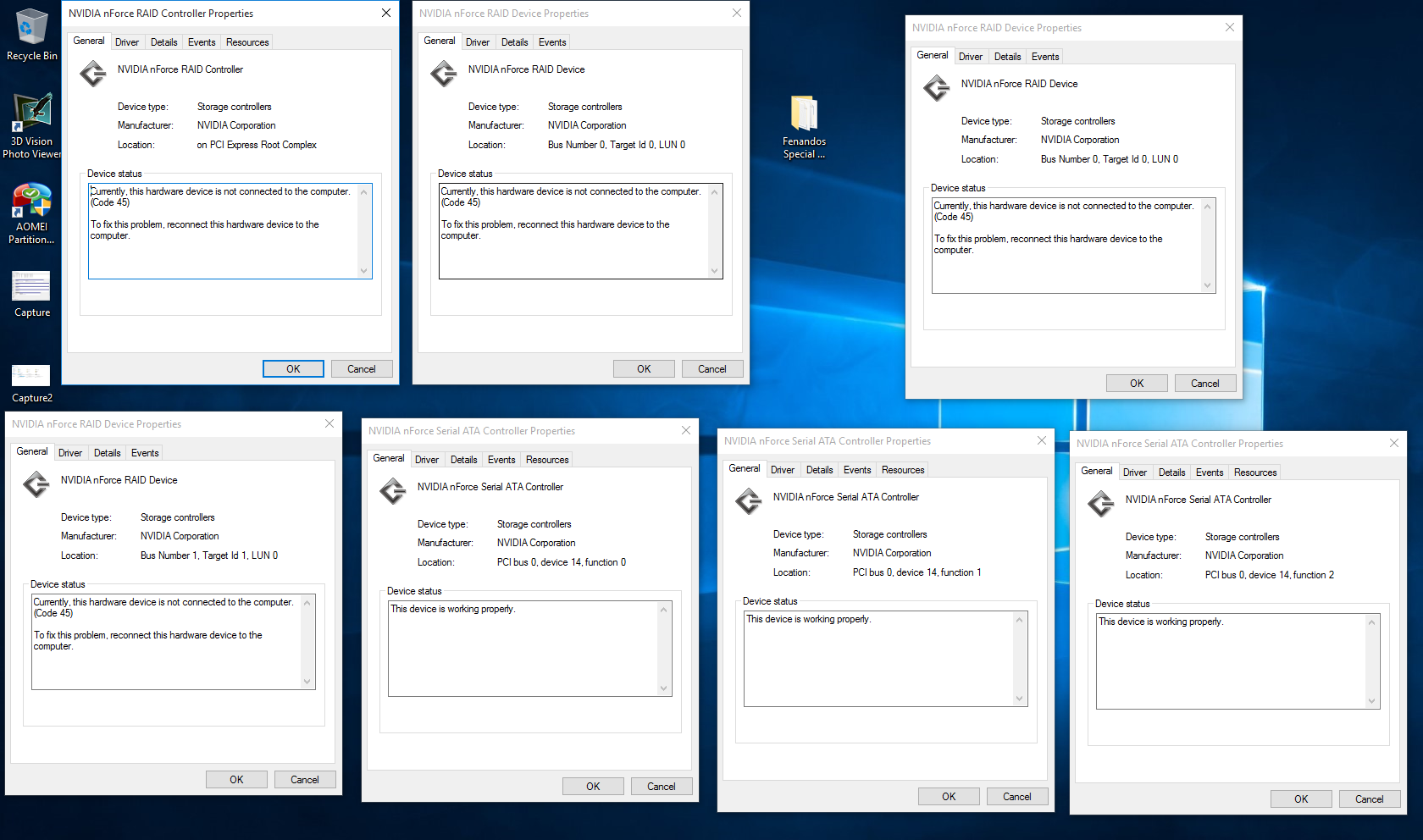 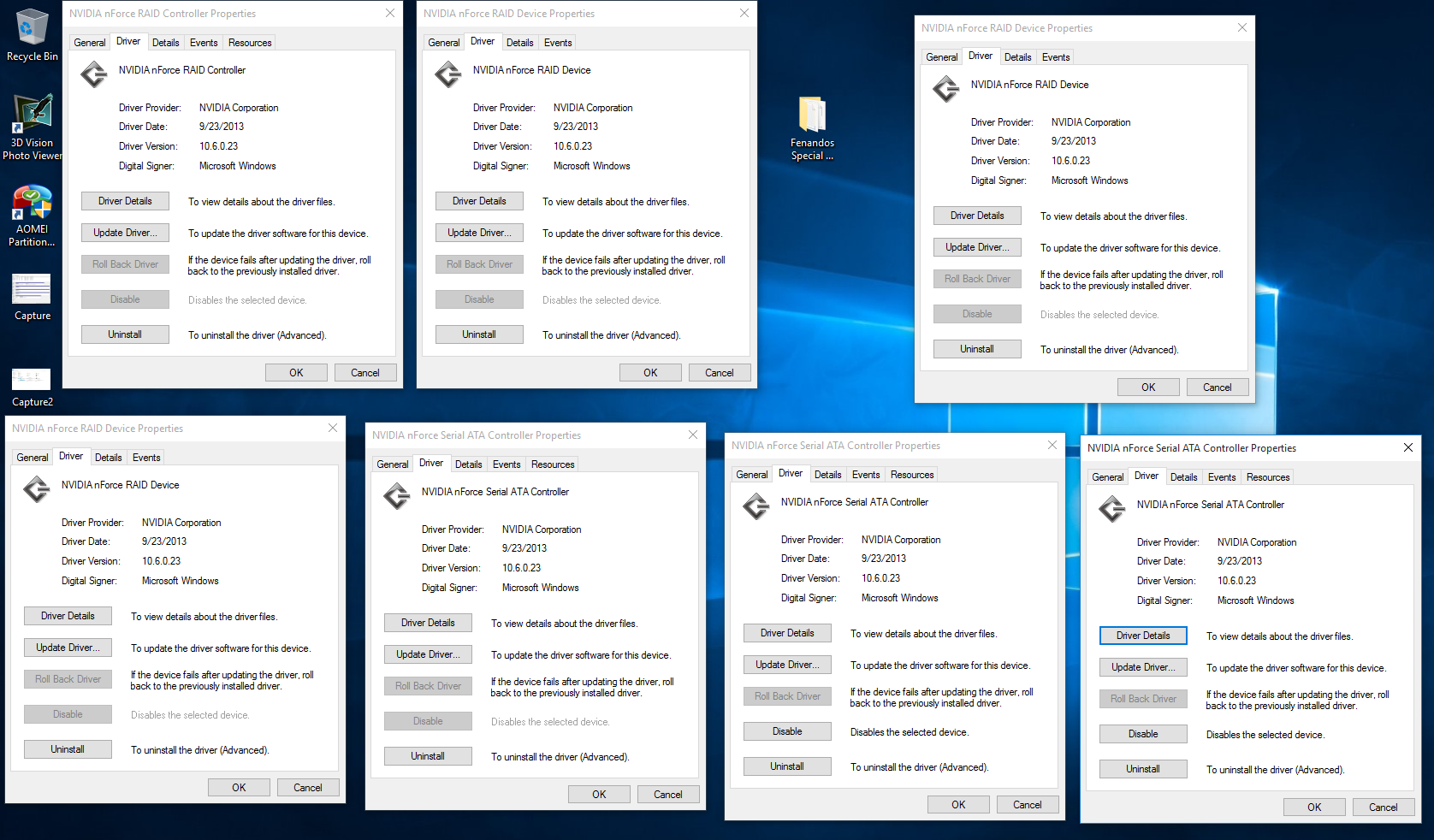 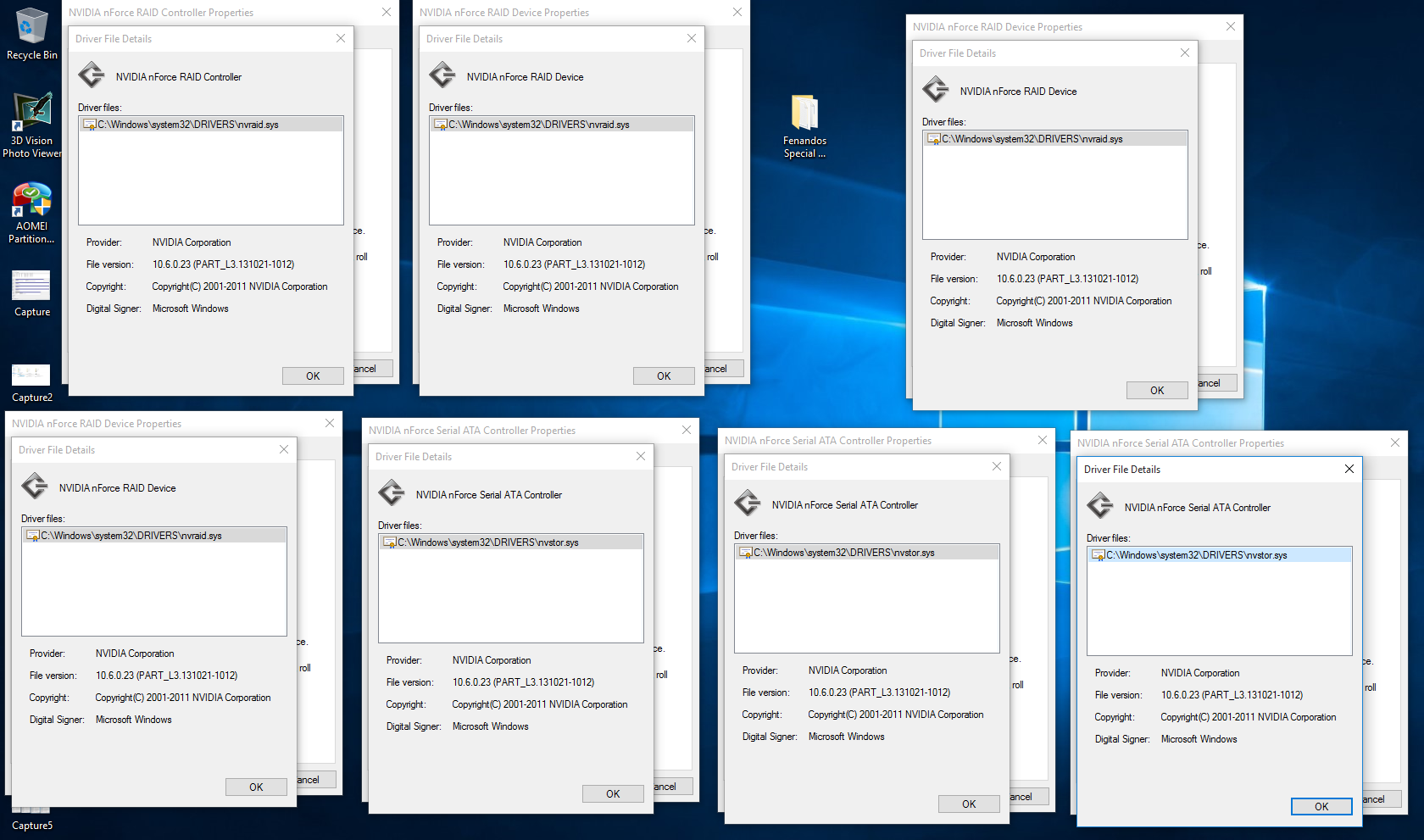 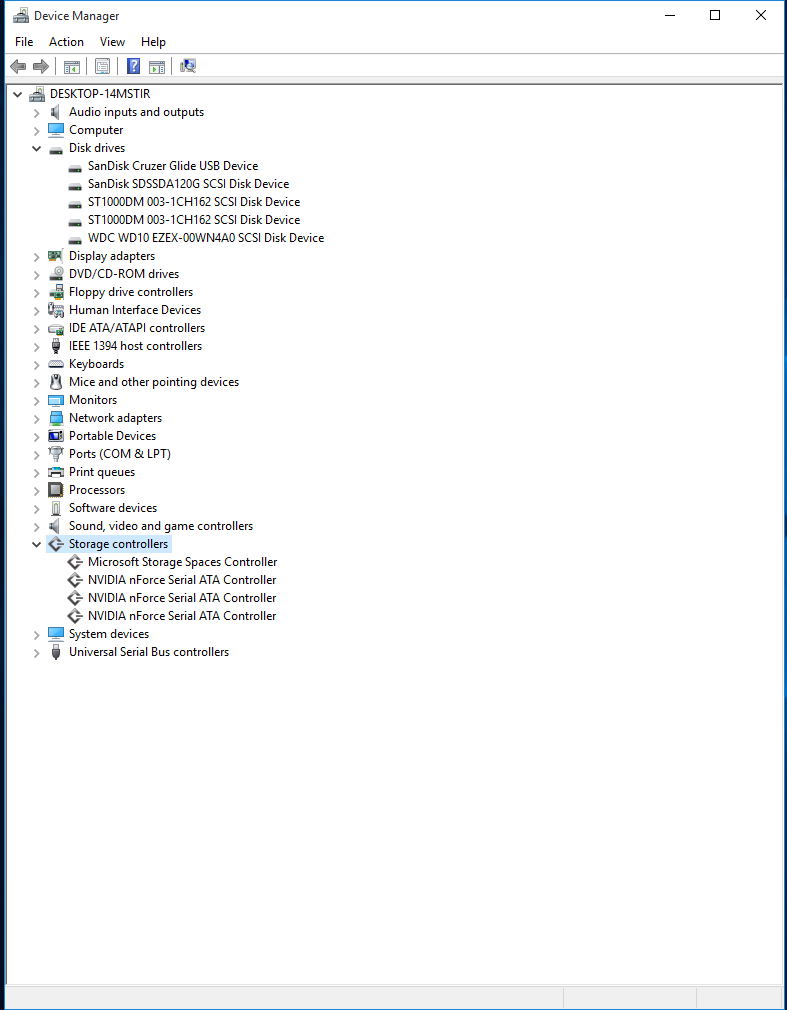 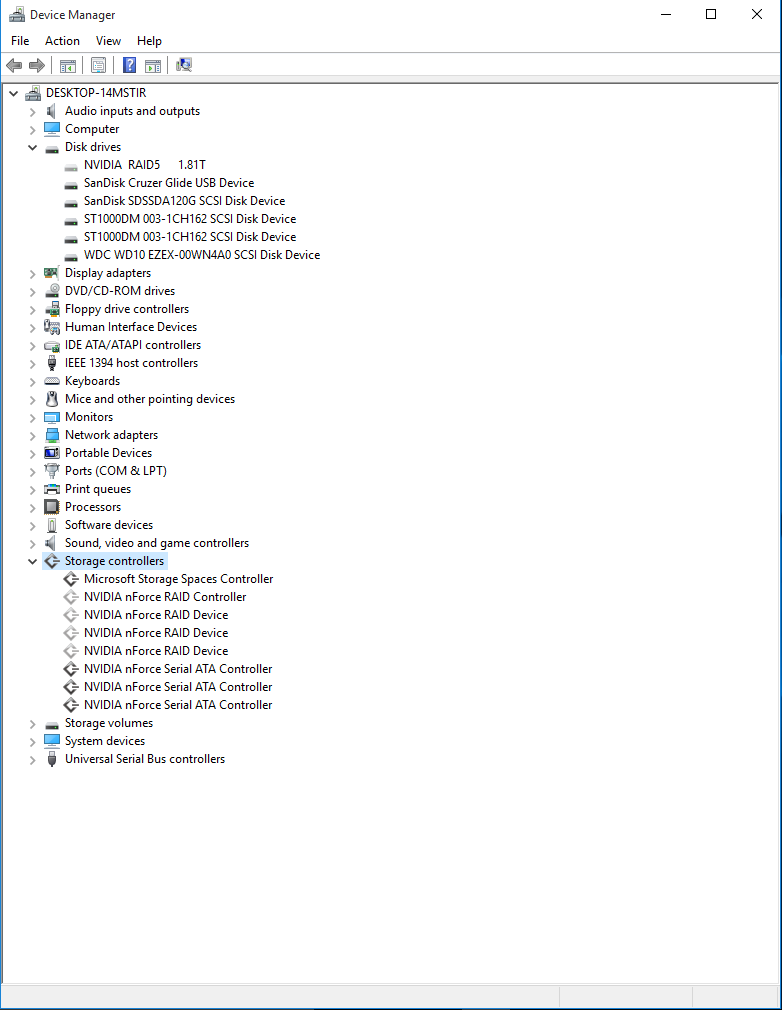 Here is the RAID added but NOT the disks: 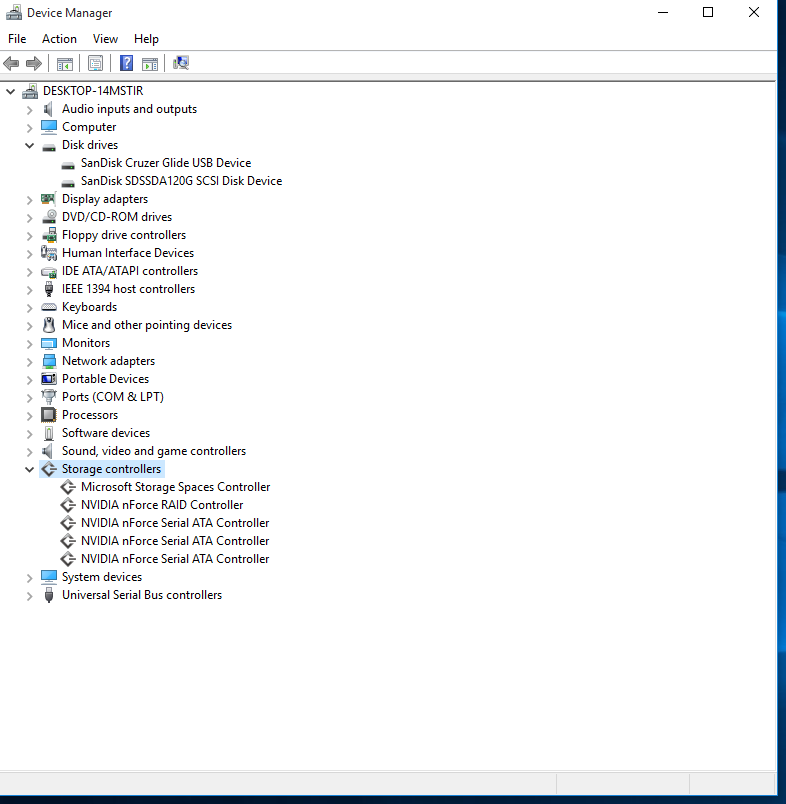 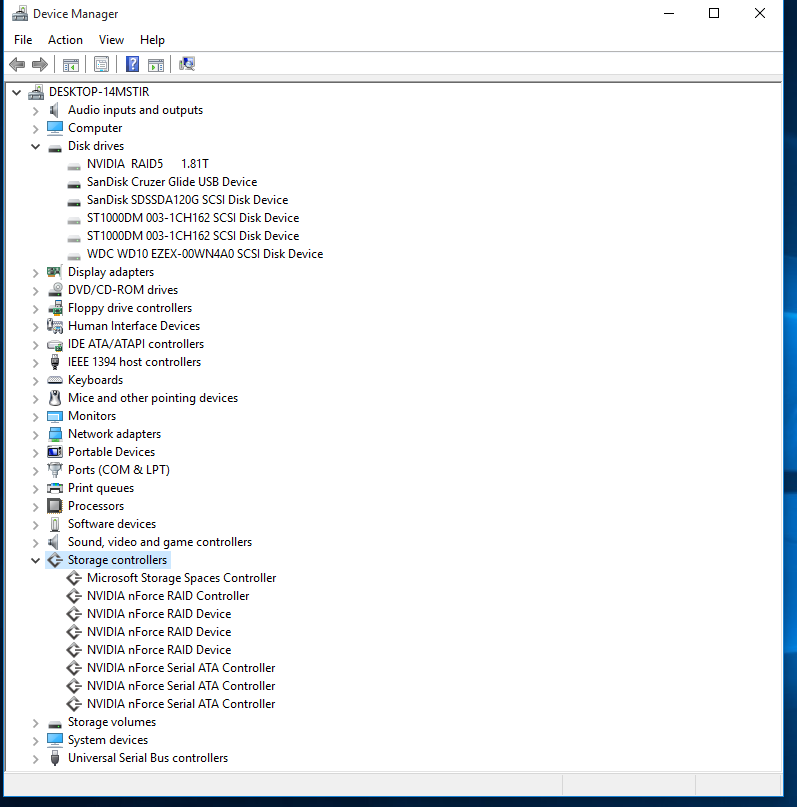 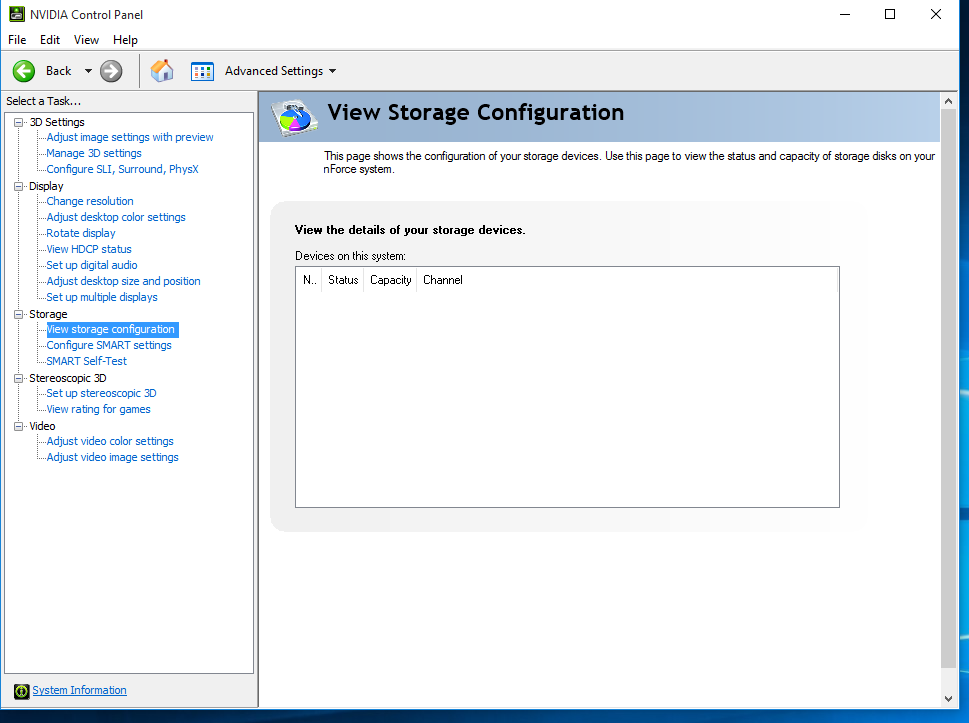 And finally disks added to RAID: 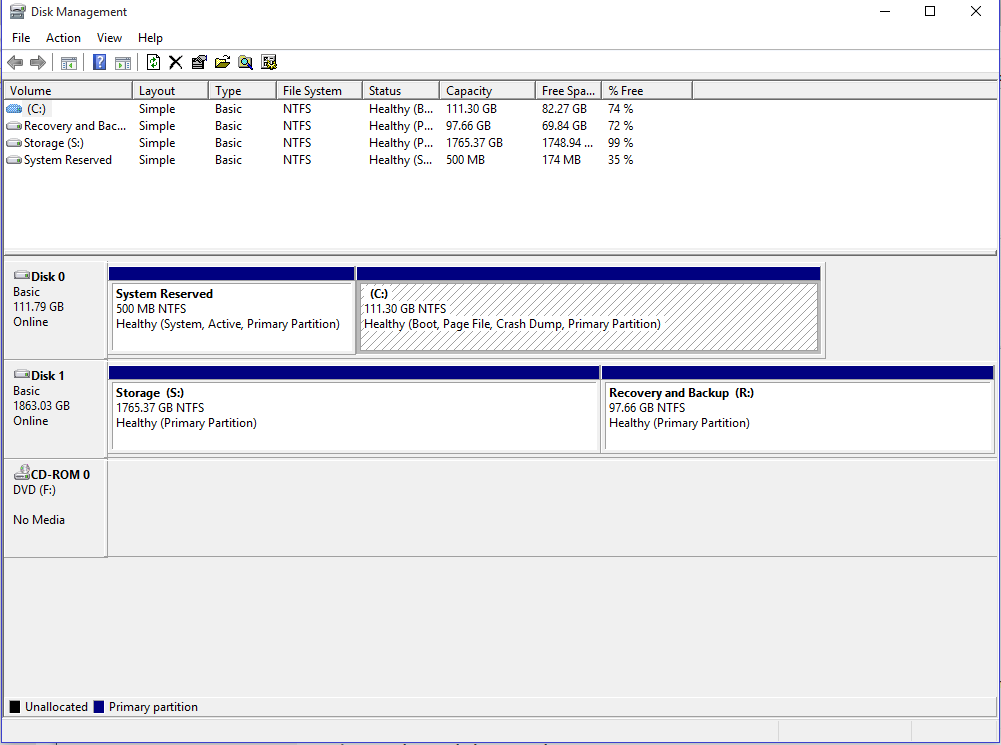 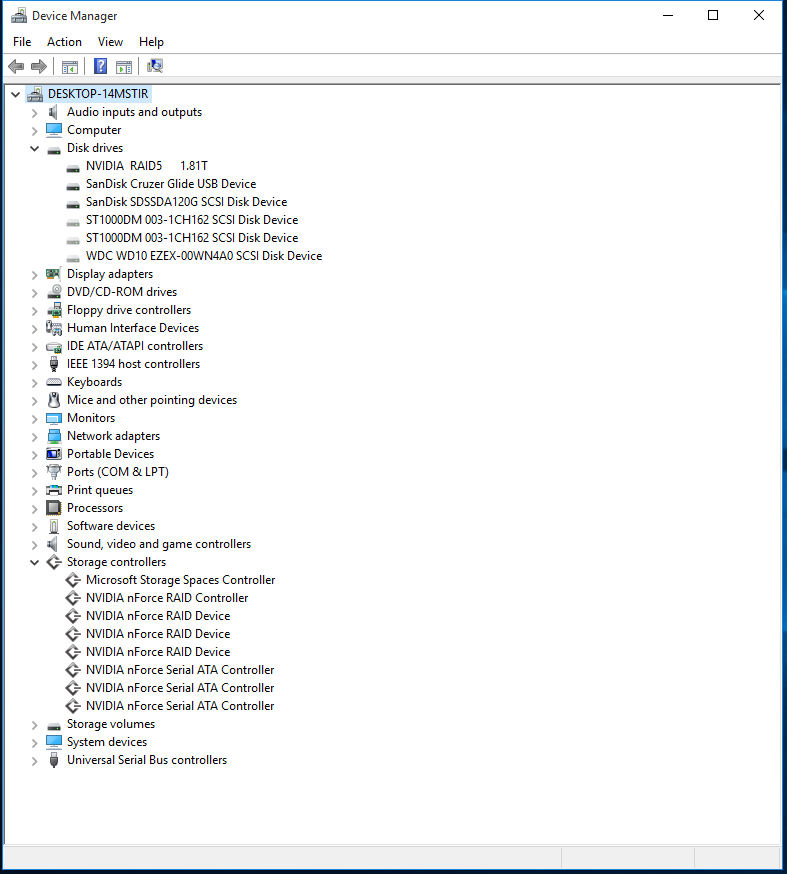 And now after all this, Windows has decided to update and one of the RAID configuration is flashing red in MediaShield; however, it is still detested in Windows. edited(Detected no detested)*** 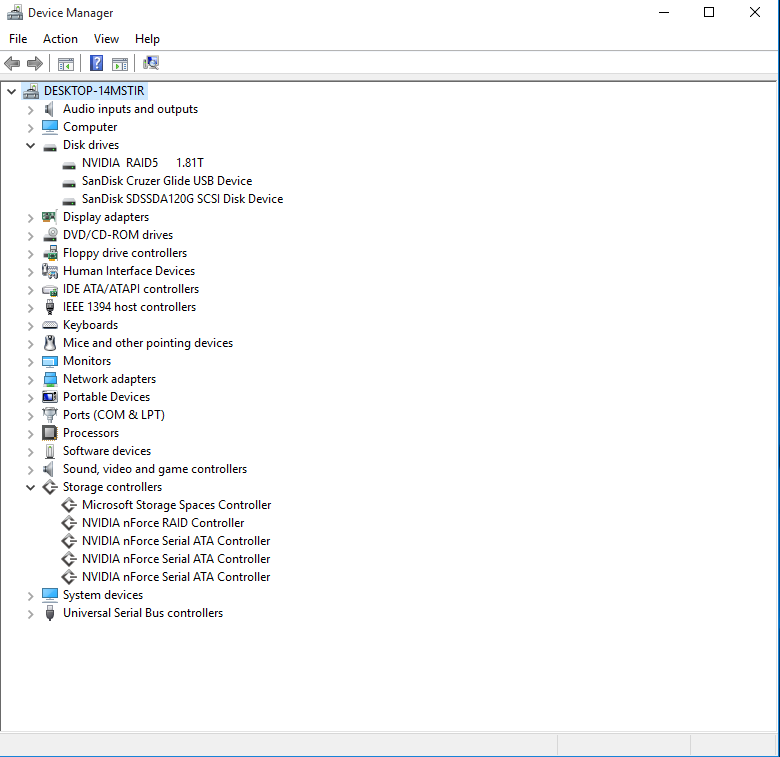 @pepsidave48653 :
Thanks for your report. Yes, it is really a nightmare for users with an nForce RAID system to get a modern Windows Operating System properly installed and running fine.

I reinstalled Windows 10 and grabbed some screen shots of my drive configuration and Device Manager. I installed all your drivers but windows changed them to the windows drivers…this has been a battle I have not been able to keep your digitally signed drivers installed. If I try to change them back to your drivers the RAID disappears and is no longer seen.

Here are the shots…:

Fernando, Thank you for ALL your time and help it was greatly appreciated.

I am going to delete the RAID and just go with 3 individual drives. I didn’t really need the RAID I just thought it was a cool feature and I had 3 drives so I figured what the heck.

Again, Thank you for ALL the help.

Maybe Fernando can increase driver version and date release? So the windows update will think, that they are newer then his "new".
I know that Leshcat did it with their drivers

Well, I’m officially done and I give up. Windows did an update and the drive is gone again. The drivers are there but the drive is gone.
I am going to delete the RAID and just go with 3 individual drives.

It would be a pity if you do that.
Please read my reply to Benik3’s proposal:

Yes, it would be no problem for me to change the driver date by editing the INF file content and to let the OS think, that it is a brandnew driver.
Reason: The OS just reads the date, which has been written into the related INF file and doesn’t check the real driver date. It would even be possble to manipulate this way the driver version to a higher one.

Nevertheless I hesitate to manipulate these data, because
a) it will extremely irritate everyone, who doesn’t know, that these are fake data, and
b) I doubt, that it really will solve the problem, that the Windows Update will offer a driver update in the future, which may destroy a working NVIDIA nForce system configuration.

The best solution for affected nForce users will be to prevent any Windows Update action regarding NVIDIA nForce drivers. >Here< you can get some informations about how to do it.

Although I totally understand the content of your post (I am a German as well), I generally only answer questions resp. reply to support requests, which are written in English language.
Reason: Only this way all visitors of the Forum benefit from the discussion.

After i update my win to win 10 , main board MSI K9N Platinum ,
my raid DRIves are no longer displayed , the drivers have actually instaliert individually .
Version 11.1.0.43 signer Microsoft ??
The built-in RAID disks are displayed in the device manager , there I can see the disk type
under NVIDEA nforce Serial ATA Controller in Device Manager ( there 3x )
1x with 2 RAID disks,
1x with SSD Win10 disk and DVDplayer
and yet 1x with 2 Raid drives .
But how do I get the partitions visible again ?? Computer Management / Disk you are not listed .
Help would be great . My head smokes already , for the moment , it 's enough for me . otherwise I’ll just error because I 'm confused .

nut I manually renew the driver from the standard two-channel PCI IDE controller ??
Have tried it but did not . Then it was deactivated after reboot,

@Teddy :
Thanks for having translated your request.
The reason of your issue is, that the Win10 Setup obviously has replaced the NVIDIA nForce SATA and RAID drivers of your previous system by their own generic ones with the result, that the existing NVIDIA nForce RAID array cannot be detected and shown by the OS.
Since you obviously are still able to boot into Win10, I suspect, that your system drive is outside the nForce RAID array.

Your current problem can be resolved, if you re-install the required NVIDIA nForce drivers for the following devices, which all belong to the nForce RAID array and are absolutely required for a proper function of the it:

Important:
To find out, which devices will need another driver, please post a screenshot of the Device Manager after having expanded the sections “IDE ATA/ATAPI Controllers” and “Storage Controllers” and checked the “View hidden devices”.
Additionally it would be fine, if you can post all the specific driver(s), which are currently used by the related devices (right click onto them > “Properties” > “Driver” > “Driver Details”).
m1hn3a August 10, 2016, 1:13pm #34

@Teddy :
I have the same problem after upgrade Windows 10 to Aniversay update.

@Fernando :
I have the NVIDIA nForce Serial ATA Controller(s) and the NVIDIA nForce RAID Controller in Storage controller, but I cannot see any NVIDIA nForce RAID Devices in Storage controller (the option Show hidden devices is enabled). I can see 4 “Generic device array” or something like this in System devices. (I have 4 disks in RAID Array). I tried to update the 4 “Generic device array” with “NVIDIA nForce RAID Devices” but it doesn’t install.
I came back to November update, and all was in place, and RAID is working. I tried to install windows 10 aniversary update version from scratch (downloaded iso file from microsoft website), but with no success, the problem was the same. I installed November update from scratch and the RAID is wordking (with microsoft drivers)…but with Aniversary update it don’t work.

I think Microsoft has changed something in the new version… because it doesn’t work. If somebody have a solution (except the “change your MB/PC” or stik with Windows 7/8/10(old version)), please help us.

@m1hn3a :
Thanks for your interesting contribution!

Please give me the exact informations about the drivers names and versions of all listed "NVIDIA nForce Serial ATA Controllers", "NVIDIA nForce RAID Controllers" and "Generic device arrays". What I need to know are the "Driver Details", where the real drivers (*.sys files) are listed.

EDIT by Fernando: Code of the inserted screenshots corrected

@Teddy :
Thanks for the screenshots.
There are at least 3 things, which have to be investigated:

Have you checked the option “Show hidden devices” after having hit the “View” tab of the Device Manager?
YES

Do you see within the “System Devices” section of the Device Manager devices named “Generic device array” (or similar)? If yes, which HardwareIDs do they have (right click onto them > “Properties” > “Details” > “Property” > “HardwareIDs”)?
look the pics please

@Teddy :
Thanks for the reply and the pictures.

Here is my analysis:

According to my current knowledge you should be able to get access to the RAID arrays and their data by doing the following:
By the way here are questions, which have nothing to do with the solution of your current problem:
Good luck!
Teddy August 10, 2016, 10:00pm #40

Hello and THX for the workaround,
will try it and give feedback .

Why haven’t you connected the SSD and the DVD Burner to the Channels of the SATA port 0 and the RAID array members to the SATA ports 1 and 2?
Note: Users, who want to get the best performance and shortest boot time, should connect the system drive to the first available SATA port (here: Primary Channel of the SATA 0 port).
SORRY in the Moment I can´t remember why I did that. But System was runing well under win7.

Why did you disable the NVIDIA nForce SATA port 1?
The pic shows that Raid-Funktion is enable, and the enable drives are for raid-use ready.
I Think