I thought I would spare myself the headache and just buy an official Intel server board to use my Xeon QL1k 24c Engineering Sample CPU’s.

So now I have an S2600BP Intel board that won’t boot the QL1K, I read somewhere that if I upgraded the Intel bios to a 2.0 or later version, then it would work and support all ES and V2 processors, so I updated to the latest firmware and still it can’t boot it.

The Intel Server Board I have does work well with my Production 8180M processors, but I really need the ES to work on this board for a special research project.

What can be done in this situation? Does the Intel BIOS need some modifications to get this to work?

Please, someone help, I would gladly pay you. 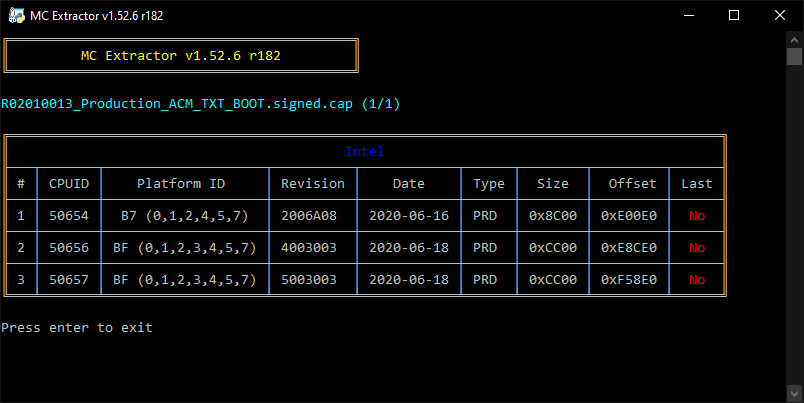 I would suggest you check all earlier versions of the BIOS with MC Extractor (Python script) to see if support was ever included and possibly removed at some point.

Ok I did it, I downloaded all the available bios images from intel:

Is there a hidden Bios that intel has that isn’t on their list?
How can Intel not support its own ES CPU’s and other manufacturer’s like supermicro do?
This part doesn’t make sense.

What can I do now?? Just toss these CPU’s in the garbage and get new ones?

What does it take to make the bios support it?

@mmarcus44 You would need to attempt to modify the BIOS and add the missing microcode using a hex editor but even then it may not work.

Intel BIOS also have validation check, so you can’t flash a modified BIOS using software - you will need to use a SPI flash programmer, such as the ch341a which is cheap.

You might want to read this thread → How to bypass Intel server board check when flashing a modded BIOS? (Intel S2600CP)

Although there is no resolution in that thread it will give you an idea of what you are up against.

@chinobino I have 2 bios chips on my motherboard, one used for backup. Not sure which one to flash here, maybe both?

They are both Winbond 25Q256FVFQ, I’m guessing they are SOI16 based on the pin count.

I wonder if I can just buy a pre-programmed bios and just rip this one off the board and solder the new one on? 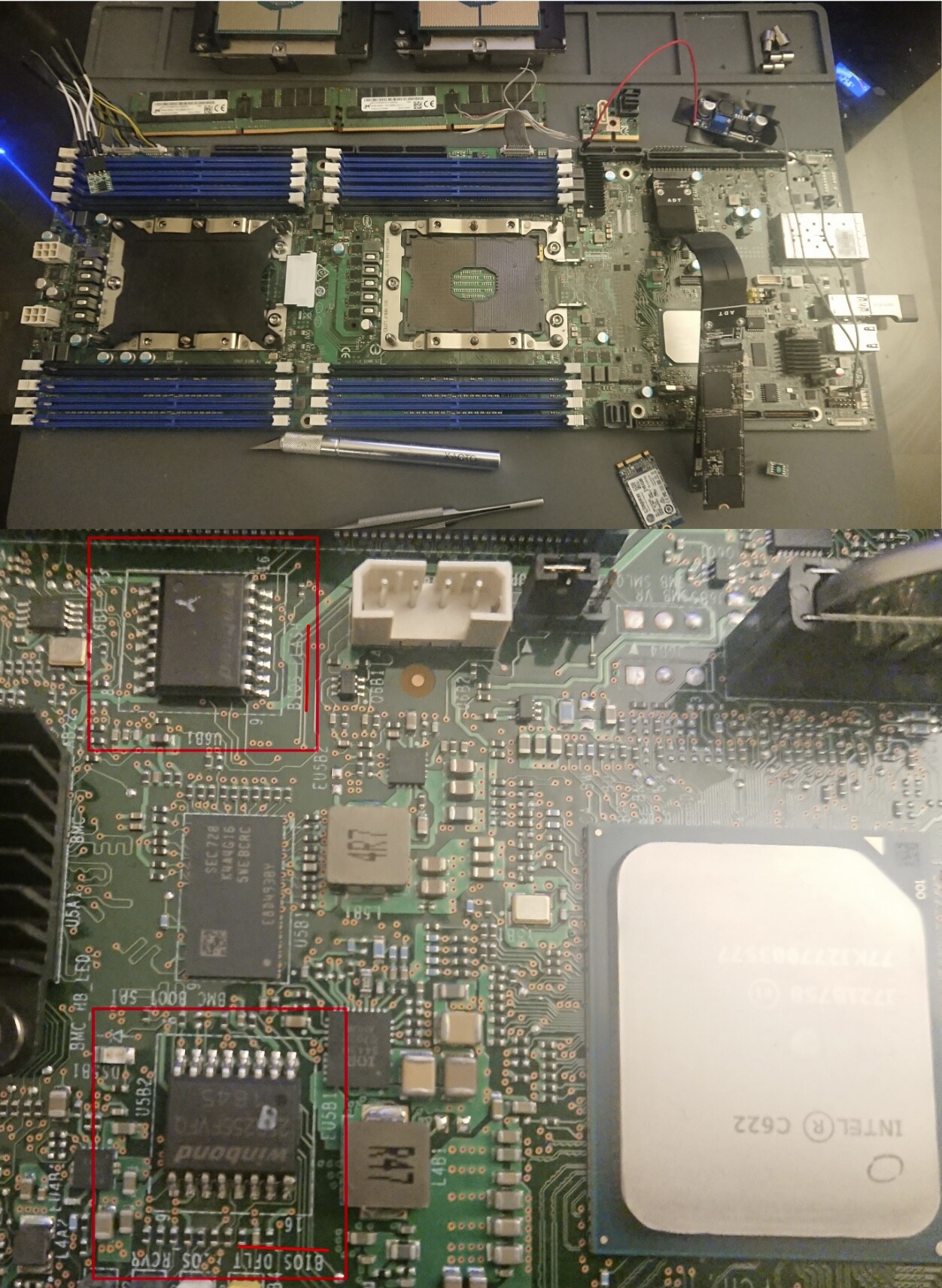 @mmarcus44 I often find the release notes for Intel Desktop/Server Boards have a bunch of useful information in them about different bios versions.

It may be that reinserting the microcode in the earliest available bios solves your problem, or it may be fruitless overall as more things than just microcode are sometimes changed.

@mmarcus44 Before you do anything you should do a complete backup of both of those Winbond chips and examine/compare them in a hex editor to see what is on them (you know what they say about assumptions).

I would also record the 2 x MAC addresses, UUID and motherboard serial number as they will be specific to that motherboard and can be a PITA to recover (and is easy to do while the machine is still in working condition).

As Intel Modder has suggested, using the earliest BIOS that still supports ES CPU’s would be ideal to test with but acquiring it may be difficult as Intel tends to remove links to earlier BIOS files - what is the earliest BIOS you have?

You could try to buy a pre-programmed BIOS but then it will be missing the motherboard specific details I mentioned above and must be for the correct SKU.

Looking at Intel ARK I can see many variations of the S2600BP, which one is yours?

Yes, that was one of the key points I picked up when I downloaded every single bios release and researched their entire changelog.

I didn’t know what the meaning behind this was since it was the first bios, but now that you bring up that it is the first “publicly” released bios, it means the version right before it was fully compatible with this exact CPU I need to install.

Does this mean if I can somehow get R00.01.0000 that it would work? (It seems like it should definitely work) but what are the chances that I can get my hands on something like that???

Also if this isn’t a case of simply putting in a microcode and hoping it would work, then what scenario would that be possible, as it seems the situation I am in is most qualified for this possibility.

What are my options right now… I know I have to get that bios programmer to do anything regarding Intel bios updating, but what if it is not as simple as adding a microcode?

This leads me into the next concern, which @Lost_N_BIOS can chime in on:

If the Asus Sage C621E can be modded to accept this CPU, then can the same guidelines be followed to make it work for this board? (I also have that Asus Sage board by the way)

I wish I didn’t sound this needy, but I really do want this situation fixed, and I am willing to pay anyone who helps in hardware/bitcoin/money… I don’t care.

And just incase you were wondering, I’m not building out this server to save money, this is part of a special project that needs this CPU in particular to work, so I don’t care if I have to pay more to get it to work.

Thanks for the quick reply and helpful insight @chinobino

I will definitely take note of that and record those items/backup all bios settings.

On top of that, I will only flash the main bios, no the backup one, because I just confirmed if the main one is faulty in any way, you can always restore from the backup bios, and even force boot from the secondary bios by using a jumper on the motherboard (which is extremely handy!)

In regards to the model, I actually own all the models… the BPB/BPS/BSB and all their R equivalents. The board I am modding in particular trying to get this to work on is the S2600BPS which is the SPF+ Nic edition.

To answer your question about which versions of the Bios I have, here is the list:

Also, for those tuned into this thread… I am fairly confident that this current BIOS set is what intel uses for all of its server boards lineup.

I think I actually read it in their BIOS release notes that it covers not just the BP series, but also the WF/ST… anything that is scalable 3647 socket.
This means that if anyone has any modded Intel board that works with this QL1K, then I could literally just use that and it would work for me as well.

Of course this is all just theoretical, but the evidence is reassuring. 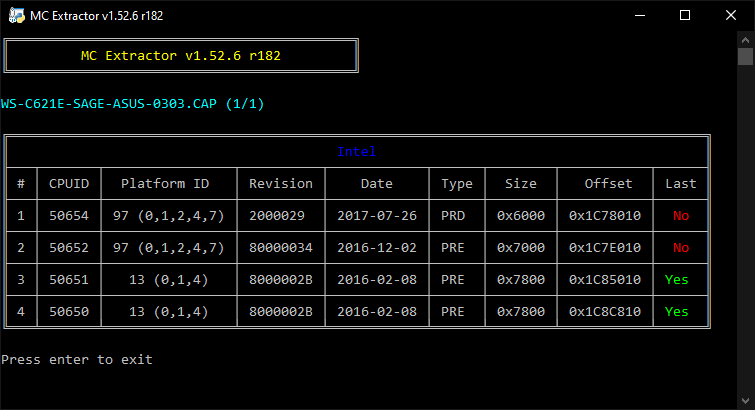 Also, modifying an Asus BIOS is infinitely easier than Intel, although you would still need a BIOS programmer to get past the various BIOS locks.

I would recommend going this path.

it means the version right before it was fully compatible with this exact CPU I need to install.

The Dxxx or Xxxx bioses referred to here may be development bioses. I do not know a way to access these.

@IntelModder Thanks for the earlier bios find, but yes, everything points to the conclusion that no available Intel bios has what we need to get the QL1K to work directly.

Any dev releases will be impossible to get unless someone has a friend at Intel that can access them.

I did go ahead and buy the bios programmer hardware anyway because it would be a handy tool to have, but I don’t see any realistic solution here.

Sure I can hope for the best that modifying a microcode reference in the bios source will work, but I won’t hold my breathe, and it doesn’t look too promising anyway.

Aside from that, there is not really much one can do to get this to work right? It’s not like I can pay someone to make a bios that would work right?

I suspect they will need access to Intel property to even get started which is not available publicly.

I wonder if anyone has ever gotten these to work.