Hello everyone and thank you in advance for the help. I’ve bought a used surface pro 4 which was victim of the microsoft me update. It is stuck at the version in the photo attached.(latest version should be SurfaceME_11.8.86.3877) I’ve read in other threads how to dump the bios in order to fix the me region but i can’t get the program to do it(Error 79: Fail to read FW Status Register value) even in efi mode. @plutomaniac @Lost_N_BIOS I’m tagging you since i saw you are very active in this topic.
Many thanks!! 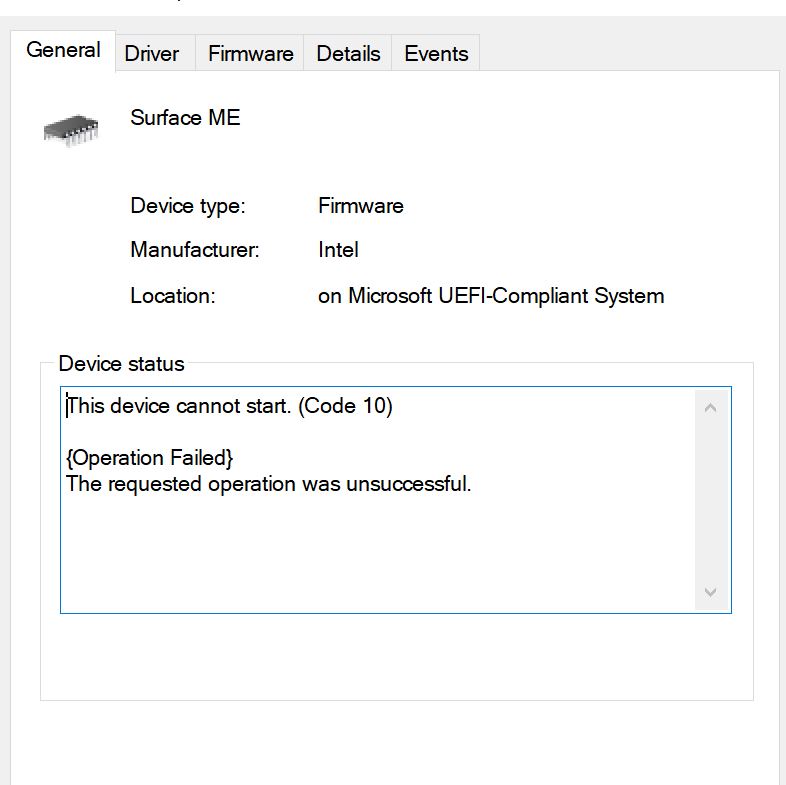 did you solve this?
i have same problem with my surface pro 5.

Hello everyone,
I also have a surface Pro 4 with a non functional touch screen after ME update. I bought it as a project tablet, originally just needed a new battery. Fixed that and all was well, till I ran windows update and then lost my touchscreen. Since then I’ve been troubleshooting it every way I know how, trying to get the system to flash the new ME firmware. No dice thus far, but I then stumbled on this forum and thought, heck I’ve got a mostly functional tablet, why not try something far beyond my skill level and likely break it further! ​

I already ordered the programmer and SOCI clip. Wasn’t sure exactly what type of 1.8V adapter to get, so I’m hoping that isn’t required. I’m gonna attempt it once everything arrives next week.
All of that said, has anyone actually managed to fix the touch screen by doing this? I’ve seen several posts about it, but they all seem to just end without a definitive conclusion.

So an update for anyone who comes across this in the future.

Don’t do this. The chip is designed such that a SOIC clip cannot get a good connection because it only has solder pads on the bottom. So you will have to disorder it from the motherboard, easy enough except It also the center of the chip is covered in another solder pad that will require heating up the whole board with a heat gun to remove. I assume this is just to secure it to the board but it makes it VERY easy to short everything together once soldered onto a test board. I had to put a piece of Polyimide Tape over it to keep it from shorting.

Once I was finally able to read the chip with the programmer it was damaged, and I couldn’t get a clean read from it or write to it without errors. This was probably due to it shorting because of the previously mentioned pad in the center, because it was over heated or because I damaged it trying to get it off.

In any case, I am still unable to find any cases of anyone managing to fix this issue so I’m thinking that the Surface ME firmware could be different than the standard Intel ME firmware and likely cannot be fixed using the method mentioned above.

Your best bet is to hound Microsoft till they replace your device. In my experience (working customer service not being a customer) Any customer service department will give up and give you what you want if you complain for long enough. Beyond that I don’t see a way to fix this particular issue. But I would love to be proven wrong.

Good luck to anyone who reads this and still decides to continue.

hello, I have the same problem but on a surface 6 pro.

I have changed all the parts of the screen… Flex and motherboard of the touch. Still, the touch still doesn’t work.

Surface Me firmware, is it inside the BIOS chip? or is it another chip…?

Could it be solved by buying an already reprogrammed BIOS chip?

ME FW image is an image part of the whole SPI bios, it can be in the same chip/split with other/totally in another. Same goes for EC FW image on laptops
Its OEM motherboard design specific in each motherboard, usually we find it on same SPI chip on general motherboards, some specific OEMS boards tend not to.
Part sellers, just want to sell… they dont care if the buyer is a simple user with no experience at all or a tech.

EDIT: Your issue with ME on Surface is around the web and in this forum from many users, exactly because they exchanged their LCD or other parts.
You can try fpt*.exe -greset but when still this doesnt work, is time for the ME FW to be re-initialized/cleaned, still no guarantee.
Look at he notes from lfb6 on post#3

Thank you very much for answering.
You are right, it is better to be well informed, before throwing money away.

in the case of the surface, could it not be within the BIOS itself?

Has anyone tried to remove the BIOS chip and reprogram it?
It is not very expensive, nor would it be a great loss.

I’m going to ask the seller, if he knows the firmware Surface ME and if it is installed inside.

again, thanks for answering