[Problem] How to Boot off an NVMe SSD

I have a similar problem.
Because my pc crashes i tried to switch bootdrives.
(samsung 970 evo 1tb to wd blue sn570 1tb)

I successfully installed windows but my new ssd is not recognized as boot drive in bios. (Its recognized everywhere else)

My searches to the solution came alway back to „i need to remove samsung nvme drivers“. They never say whats it called or how to do it.
I stumbled upon this: Solved! - How do I uninstal NVME driver on main drive? | AnandTech Forums: Technology, Hardware, Software, and Deals

[SOLVED] - How to remove Samsung NVME drivers and use only Microsoft NVME...

So I have 970 pro m.2, 970 evo m.2 and a 860 evo ssd. I’m getting bsod upon wake up from sleep with stop code “Internal Power Error” this is a known issue using samsung drivers and will happen religiously upon waking my pc from sleep. The fix is to...

I dont know why my tv looks so blue on camera but i hope you can read it.
Screenshots of my device manager: 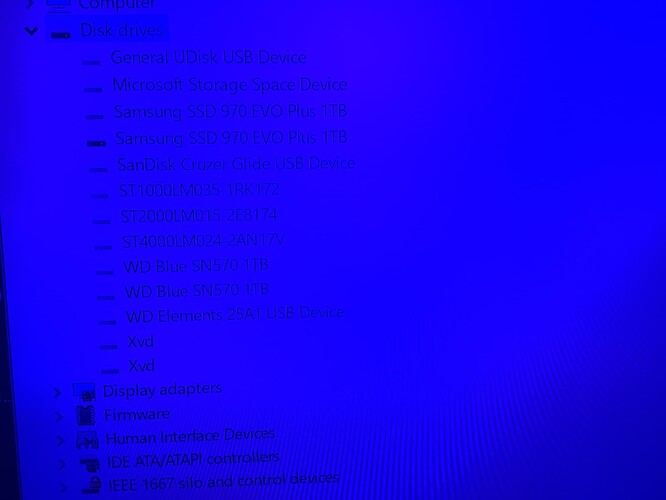 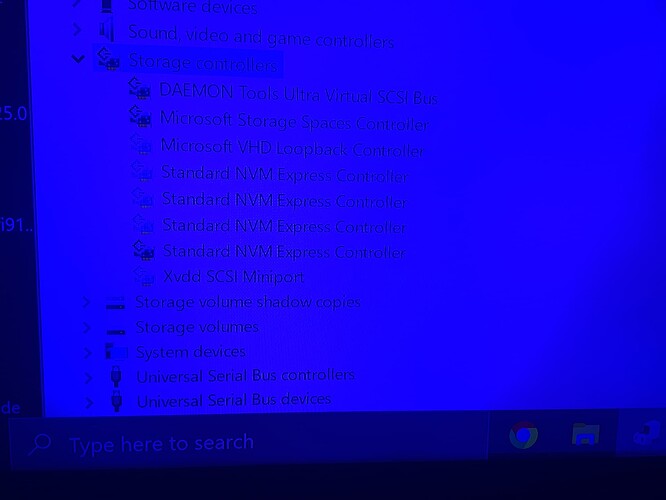 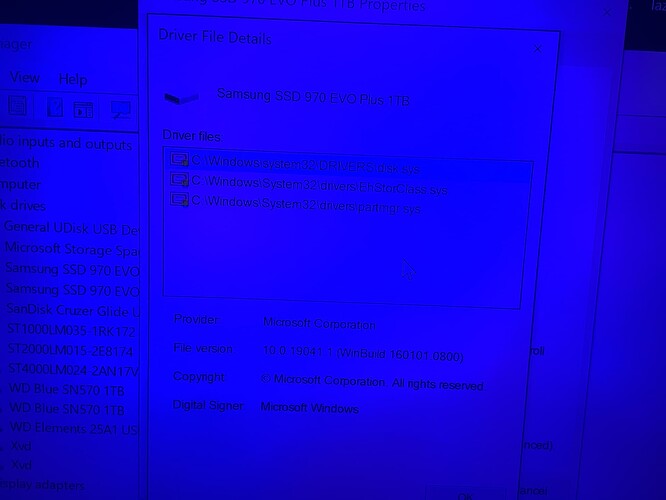 When i go into Samsung SSD 970 EVO Plus 1TB, the option rollback drivers is grayed out.

Edit by Fernando: This discussion had been mistakenly posted into >this< thread. That is why I have split the original thread and started a new one within the “NVMe Drivers” Forum section.

@Ured
Welcome to the Win-RAID Forum!
You should never try to uninstall an in-use storage driver, because after the next reboot the OS cannot find the related disk drive(s) due to the missing Controller driver.
On the other hand you cannot replace the in-box MS drivers of the “Disk drives”, which are listed within the related Device Manager section. The “Disk Management” can only be done by the OS.
When you want to replace an in-use NVMe driver by another one, you should just do an on-top install of the desired driver from within the “Storage Controllers” section of the Device Manager. This is necessary to give the OS the opportunity to re-install the last working driver in an emergency case. Don’t worry about any interference between the drivers.
If you want to get the Samsung NVMe driver replaced by the generic MS one (integrated into the OS Image as MS Update), you should do the following:

Edit: I have merged your last 3 posts.

Thanks for the explanation.

From what you said i understand that:

So far i understand.

A little bit of context:

My pc crashes non stop. I tried to find the problem with trial and error but could not locate the problem. The crashes seem random (sometimes bluescreen, sometimes as if the power got knocked out). I stress-tested everything, ram, gpu, cpu and ssd. I checked temperature and rebuilt the computer (disasembeling and puting it back together, used new thermal paste aswell) still nothing. The only two guesses that i have is that either my samsung ssd has degraded or my windows is corrupted. Eitherway, my samsung ssd seems not stable for my os. Thats the reason why i dont want to clone my ssd. Yes, i repaired windows with comand promt and it reported that evrything is healthy. Cristaldiskinfo reports 99% healthy aswell. I also tried system restore point and other windows repair options.

To make sure that windows has the best possibility to function, i am now trying to get a new ssd to work but only for booting windows.

Thanks for any advice.

I need to ad that i can use windows somewhat when i choose „startup disable driver signature“
Otherwise windows crashes all the time without doing anything.

Here are my answers:

I need to ad that i can use windows somewhat when i choose „startup disable driver signature“
Otherwise windows crashes all the time without doing anything.

This indicates, that you haven’t integrated or installed a usable NVMe driver correctly before or during the Win7 installation. There are only these 2 options:

Thanks for the replies.
I don’t know why i forgot to mention that i am using windows 10 home edition and not windows 7.

You are right, 2 years ago when i installed my samsung ssd, i basically put the ssd in my motherboard and installed windows 10 on it. I did not install any drivers or used any software for that ssd and therefore dont know if and what driver got installed. (Samsung has a software called „magician“ i believe which i don’t use)

What i tried so far: i errased my new ssd completly and installed windows again. Just as you said only the new ssd and the usb with the windows creation tool is connected. It still is not recognized as a boot drive. I also updated bios and sata firmware to the latest version.

I am trying to understand what can cause my problem. To make sure that i am searching in the right direction i am gonna ask the most basic questions:

My first question lets me think that a driver or something else on my motherboard prevents/messes with my new ssd/windows installation. There is also that „secure boot key managment“ thing which i dont know if that has something to do with it.

If nothing works, would it be possible to reset everything back to as if i bought a new motherboard? I know there is a option to make the bios select default setting but that obviously does not errase any weird driver or whatever.

Am i wrong for thinking that if for whatever reason, your ssd with the os installed on it breaks physically but the rest is fine, you should be able to get a new ssd to work even if the broken ssd had a verification signature or something similar on it?

If you know a solution that is not that difficult to do or has a great tutorial it would be greatly apreciated.

I also wanna mention if a solution would errase all data on my old ssd, it would be annoying but not devestating because i copied everything manually to a external hdd.

I also wanna thank you for helping me in the first plays and explaining how things work.

Update:
Tried to install windows again and did not work.
I am not really sure what to do with it but i think that could have something to do with it: 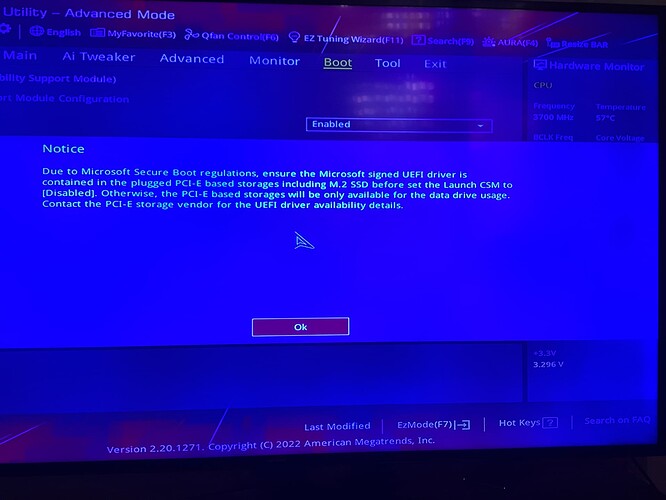 I found someone with the same exact problem as mine: [SOLVED] - Can't Boot Windows From M.2 NVMe Drive | Tom's Hardware Forum

It says [solved] but there isnt any update on how he did it.

He mentions „Yeah I can’t get that far. If the USB is plugged in, I go back to the beginning of the install menu. If it’s not plugged in, I can’t boot to the M2.“

The same goes for me. When i install windows it goes back to the instalation menu instead of booting to the m.2 and let me setup accounts. I tried to force it by removing the usb but it just goes back into bios.

If you mean dissable secure boot with other os then that is allready selected. I also can’t find a „dissable“ secure boot option. 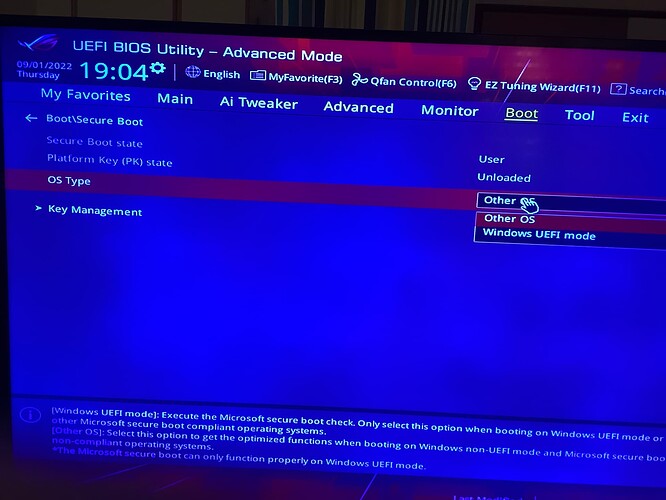 Yes select OTHER, then save reboot, bios again an check the State again, it should stay unloaded, also you can unload the keys in Key Management.
When finished the OS setup, you can load the default keys and set Windows UEFI.

EDIT: That only happens if the setup didnt finished correctly the installation on the disc, modern motherboards the 1rst reboot on window setup, will continue to finish the installation on the newly OS entry created by the setup on the destination drive (Will not pick up the USB again…usually)…so press F8 or F12 to see what boot entries you have on the system. Is it a single M.2 NVMe drive on the system? Im not gonna read all the thread…

Didnt work. I set secure boot to other os and removed all boot keys. Then installed windows and it still boots back into windows instalation menu instead of m.2

I don’t know why i forgot to mention that i am using windows 10 home edition and not windows 7.

Your fault - you posted your help request into a Win7 thread. Look at the thread title! So you posted into a wrong/not matching thread. After having solved your problem I will move this discussion into a separate thread.
To be able to boot off an NVMe SSD (only exception: Samsung 950 Pro) you should

For more details please look into the chapter “4. Installation of the OS onto the NVMe SSD:”, which can be found within the start post of >this< thread.

You’re right. My mistake. I’ll read and try to understand what you explained in your thread.
I’ll update if i figured out how to succesfully complete the installation. I also don’t want to waste your time for my stupidity. Thanks again for your help.