Problems with Windows 7 installation on NVMe

Hello, forum!
I have been using Windows 10 for several years, but in 2020 I started using a new laptop. Both disks I have are SSD NVMe. Lately I decided to try Windows 7 again with dualbooting. When I burnt official iso and booted in legacy mode, setup didn’t see my disks. After I tried UEFI, everything was fine until restart after copying files. On animated Windows 7 logo Windows stoppped booting, and then my computer restarted. After I tried safe mode, I discovered that Windows 7 is stuck on loading disk.sys. It turnt out that Windows 7 doesn’t support NVMe, but I didn’t succeed even after I tried various unofficial builds that, as it was written, supported NVMe and USB 3.0 (I haven’t had problems with built-in keyboard btw). I also tried to install it with running D:\sources\setup.exe from Windows 10, but setup didn’t see my disks again. Actually, I have no idea what have I done wrong. I also tried several drivers I found on the net, but they weren’t useful. Sadly, I can’t use a sata ssd or hdd.
This is id of my standart SATA AHCI controller: PCI\VEN_1022&DEV_7901&SUBSYS_382D17AA&REV_81
I hope I will succeed someday. Do you have any ideas what I should try?

This is an AMD SATA controller, present in many AMD chipset generations.
Windows 7 has NVMe support installing some updates in installed OS image or integrating it in a new OS image to build from scratch.

The drivers Fernando shared didn’t work, “could not be installed”.

@Sevoos
Welcome to the Win-RAID Forum!
Since Win7 doesn’t have an NVMe driver in-the-box, you have either to integrate the MS NVMe Hotfixes into the boot.wim and install.wim of the Win7 Image or to load a Win7 compatible and WHQL certified NVMe driver, which supports the specific NVMe Controller of your NVMe SSD.
Which specific NVMe driver from which manfacturer did try and how did you do it?
Are you sure, that you are booting in UEFI mode using the GuiMode Partition Table?
Good luck!
Dieter (alias Fernando)

I am absolutely sure that I used UEFI
On lenovo.com I found no storage drivers for my model, here are several screenshots: 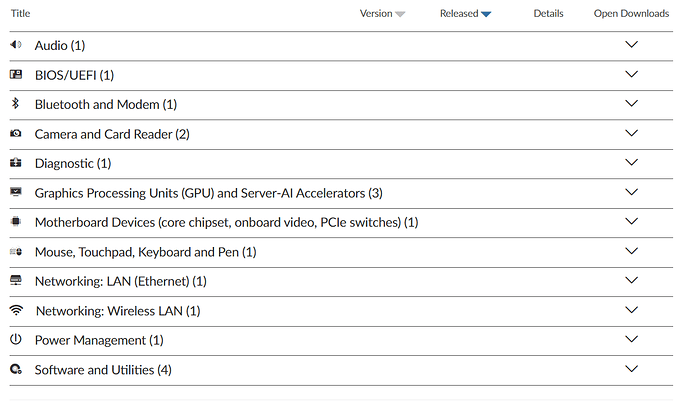 For Windows 7 the only available driver is for Migration Assistant.

I will try to follow steps mentioned on Microsoft.com, thank you all for your help and support.

@Sevoos
Your screenshot of the Device Manager seems to show 2 Standard NVM Express Controllers, which are managed by the generic MS NVMe driver.

In legacy mode Windows 7 can’t see my drives, after copying files in UEFI mode Windows is stuck on loading disk.sys.

@Sevoos
If you want to use an NVMe SSD as bootable system drive, you have to install and run the OS in UEFI mode.

After I tried UEFI, everything was fine until restart after copying files. On animated Windows 7 logo Windows stoppped booting, and then my computer restarted. After I tried safe mode, I discovered that Windows 7 is stuck on loading disk.sys.

@Sevoos
What means “after I tried UEFI”? What have you done?
Note: You cannot switch from Legacy (MBR) to UEFI (GPT) booting from within a running OS. You have to reinstall the OS in UEFI mode from scratch.

@Sevoos
Since the manufacturer of your NVMe SSD doesn’t offer a specific driver for its NVMe Controller, you may only have the following options: 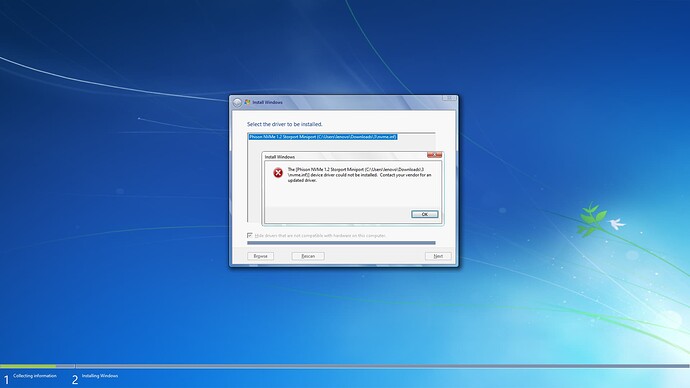 It says that the driver couldn’t be installed. Should I try to integrate it using hotfixes by Microsoft and DISM?

@Sevoos
Look into my last post. There is the answer.