2 posts were merged into an existing topic: [HowTo] Get full NVMe Support for all Systems with an AMI UEFI BIOS

Sorry dear, you right ,my apologies ,i can install W10.
But i am very disapointed about speed , all PCI slot are empty and PCie 2.0 standard promise 500Mo/s for 1 lane but the PCie adapter is x4 cabled ,so can be 2Go/s.
There’s no Samsung 980 NVMe driver for Windows 7 too. 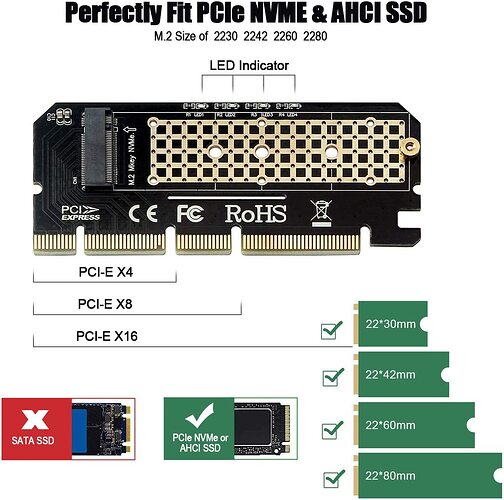 @Samsara
If you want to install Win7 onto your NVMe SSD, you have either to integrate the MS NVMe Hotfix(es) for Win7 into the boot.wim and install.wim of the OS ISO file or to load the generic Phison Win7 NVMe driver 1.5.0.0.

About speed, it’s ok ,HDTune have problem , CrystalDiskMark report maximum speed 3500Mo/s and this MB have PCie 3.0 so 4000Mo/s with 4 lanes.

I tried OpenFabrics_Alliance_NVMe_1.5.0.0_157 and Phison NVMe driver v1.5.0.0 Windows 7 drivers, both are unsigned so Windows refuse them.

@Samsara
If you want to install Win7 from scratch onto an NVMe SSD, I recommend to integrate Microsoft’s NVMe Hotfixes into the boot.wim and install.wim.
The Phison NVMe drivers v1.5.0.0 have been digitally signed by Microsoft on 03/01/2018. The Win7 Setup routine may not except them, because the signature has been expired in July 2018. Nevertheless you will be able to use the Phison or the latest Samsung NVMe driver v3.3.0.2003 WHQL for Windows 7 once the Win7 installation has been completed (note: due to the missing DeviceID the installation of the Samsung driver has to be forced by using the “Have Disk” option).

With DISM GUI.exe i added several packages and drivers to Windows 7 ISO 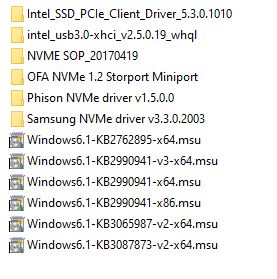 but Windows install cannot see NVMe and even SATA !
But… it can see NVMe and SATA drives for add drivers (same as added to ISO) 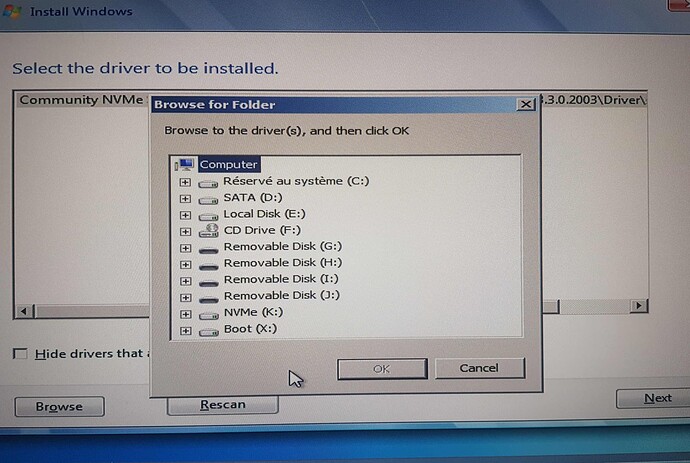 @Samsara
After having integrated the MS NVMe Hotfixes for Win7 (see start post of this thread) into the boot.wim and install.wim by using a tool like NTLite, the Win7 Setup will detect the NVMe SSD resp. its NVMe Controller.

Tried with NTlite and 3 different Windows 7 ISO ,same results.
When i try adding drivers manually during installation ,no one can be accepted.

I installed Windows 7 UEFI in SATA then cloned to NVMe , it’s Ok.

But it give me new problem like refuse Intel Graphic 4000 drivers ,pretend not signed even loaded from Intel

(of course ,same drivers are ok with Windows 7 legacy) ,even with disabling drivers signature cannot use internal graphic.

I think this computer can run only W10 UEFI with NVMe.

I doubt, that you have done the integration of the Hotfixes and the OS installation in UEFI mode the correct way (the used Win7 Edition doesn’t matter).
Did you try to integrate the MS NVMe Hotfixes as drivers? That doesn’t work. You have to integrate them as Hotfixes.

You right ,added as drivers only.
But now i know it’s useless to go further, fresh Windows 7 UEFI install and already problems.
I will continue to use W7 legacy SATA.

@Samsara this probably won’t help you out any, you seem to have a handle on what your doing, but it might help someone else. I have Win 7 working with an NVMe but only in Legacy Mode… I never got UEFI mode to boot even with my Windows 10 drive… but that could be because it is set MBR instead of GPT! Regardless its working fine and at expected speeds! (Scroll up a bit) Originally I only used the 2 Microsoft fixes KB2990941-v3 and KB3087873-v2 but since have tried some of the other drivers… none seem much of an improvement over the Microsoft drivers and none so far give me temp, or health or life of my WD Black NVMe! Still working on that!

The ported NVMe Windows 8.1 drivers from NTLite Forums (scroll up more) seems to work well but no temp, or health or life data! 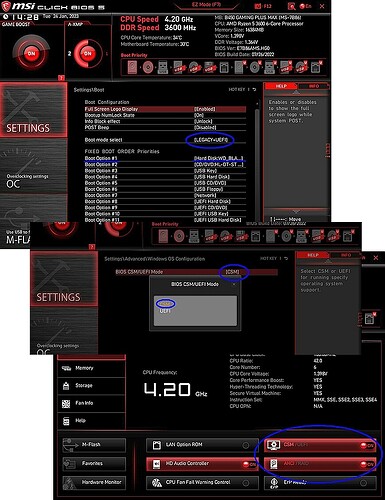 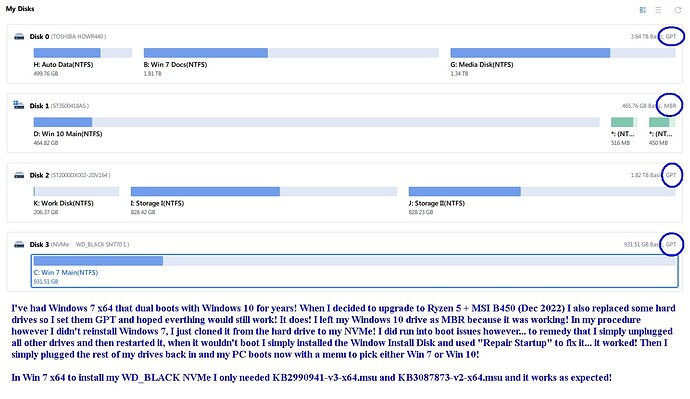 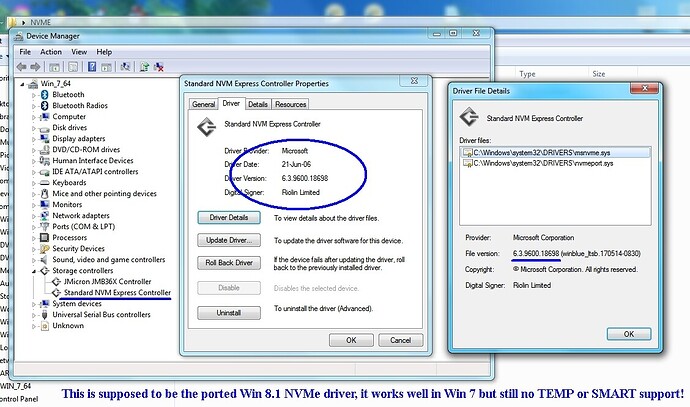 Questions, could it be “modded” to run in Windows 7 x64, is that something you could do and if so should it then ALSO provide the data that the WD Dashboard needs to display their NVMe’s Temp, Health and Life?

@WDBlackonWin7
My answer to both questions is: No!

OK, thanks for the reply!