HI. I’ve managed to mod the BIOS for this mobo to use latest microcodes and UEFI GOP drivers and some roms but I would like to update the NVme driver and GPU rom’s to latest versions. Is there anyone that could fo a full upfate of this nios using latest roms and gop drivers for all components? Here is the BIOS file: https://www.asus.com/Motherboards/SABERT…/HelpDesk_BIOS/

@izajasz - Before I do anything, please show me, or tell me, what microcode do you see live/in-use when checking in OS as you see below with HWINFO64 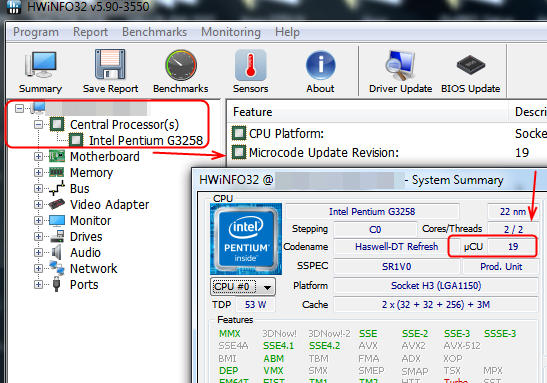 What CPU do you have also?

Thank You for Your interest. I forgot to mention, I also updated the uCode (i did all of this using UBU) so my version is 28. I’m using 4790K CPU.

EDIT: In the meantime, I was reading some other posts in this section and it seems that my PC is using Windows uCode v 28. I knew something is fishy because I remember upgrading the BIOS with v29 uCode and now I think I know why Hwinfo shows v28 instead.

EDIT2: I’ve followed the procedure to rename Windows uCode file but it still shows v28. I guess that I did not update it to v29 after all.

@izajasz - It’s OK, I will re-update microcodes in my edit anyway, I did see you mentioned initially you already tested updating them.
I asked about the microcodes because your BIOS has two old (rev 7) 306C3 microcodes outside of the normal microcode volumes, so I wanted to see if those are being loaded and live used, or are only in the BIOS for other Asus/OC behind the scenes reasons
UBU will not touch those, so they remained in there in your updated ucode test. And since you see version 28 that means they are not loaded/live-used in OS so I will leave them untouched as well.

Yes, for you to use what’s in BIOS vs what windows tries to load, you have to do this
Intel, AMD, VIA & Freescale CPU Microcode Repositories Discussion (19)

Thank You very much. I see forward to flashing Your modded BIOS.

You’re welcome! What did you have issues with UBU in updating? I mean, why did you not just update all of BIOS yourself with UBU?

@izajasz - What version RST do you want? Look at both locations below, I think v13.5.0.2164 may be best, but you have to pick what you want
Intel EFI “RaidDriver” BIOS Modules
AHCI & RAID ROM Modules

Well, I would like to max update this BIOs as possible and I m not good at doing it manually so with UBU I can only update EFI drivers, uCode and LAN roms, and I would like to update GPU vroms also and AMI nvme driver to the latest version. In other words, I woul like to have it updated in every possible working way

NVME driver cannot be updated, there is nothing newer for this, rest I can do (except VBT)

Oh, so it seems I have the rest already? By VBT You mean video rom? If yes, then I already have a modded BIOS flashed that has the other components updated. I thought You can update Nvme driver manually

What is your actual LAN Chip, look on the motherboard to confirm. No, there is no update to manufacturer included NVME modules

I have the intel LAN. Can You suggest to whom can I send a message to update VBT?

Also, what is VBT exactly? I thought that for UEFI boot only GOP is used.

Yes, I know it’s Intel. Look at the chip and tell me what is the ID printed on it? It’s a large square, usually near the LAN Port

For VBT, there is no one to message, when I’m done just make a request in this thread for someone to update your VBT for you.
[Guide] Transfer of specific Intel OROM VBIOS and GOP VBT settings by using Intel BMP tool

Oh, ok, no problem. Just please, wait for this for few hours as I have to go out and as far as I can see this chip is nowhere i can see without taking out the GPU.

Thanks, I was just about to say to see my edit on previous page

When I made my mod I used 0.x.x EFI driver and boot agent ;d

Yes, that’s what UBU suggests, I will use it too

Just have to do vBIOS, sort out the rebuild properly (since UBU messes up BIOS doing LAN, GOP, or RST - did all three as test at once, so not sure which it does it during, but not ideal so I will rebuild manually and properly

) << I assume RST/EFI replace, since I see similar issue if this done with UEFITool instead of MMTool, UBU must use UEFIReplace for this part and it messes up BIOS - Added padding file

* Edit - @izajasz - Do you use onboard graphics, or PCIE graphics card? If you do use onboard graphics do you boot UEFI mode or legacy?
I ask because GOP is located x2 in BIOS PEI modules and these should never be edited with BIOS tools usually, only direct hex edit and since new GOP is larger the size changes and the entire volumes must be rebased (so not possible to direct hex edit)
And, if this does apply to you (use onboard graphics and boot UEFI Mode), I still would suggest you not touch GOP until you have a programmer in hand and backup made in advanced, even USB Flashback may not help you recover from a bricked BIOS if touching those volumes with rebuild tools if it bricks your BIOS.
Even UBU refuses to touch the second one, not sure why it feels OK to do the first one (both same, should not be touched like this, may brick etc)

Here is mod BIOS, without GOP or VBT updated, flash via USB Flashback ONLY (DO NOT FPT Flash this) - UBU only used to show versions info in included image, all mods done manually
http://s000.tinyupload.com/index.php?fil…372866130288380

I am using both graphics (PCIE and onbard for Quick Sync Video encoding). I am booting in UEFI mode. Currently I am working on a BIOS modded by UBU with the GOP updated and its working flawlessly so I think it will be ok to replace the GOP. I have a programmer so I can flash the BIOS eeprom just in case.