I have local brand laptop “Casper Nirvana F650 Gold” with dual gpu (intel & nvdia), and BIOS Insyde Corp, 205 which has too limited options available. It does not even have a feature for graphics cards. So, I am wondering if I can get its hidden features revealed.

I attached .zip files including the following dumps; “bios-region_.bin”, “desc.bin”, “me.bin”, “spi.bin”, and the screenshots of CMD on which I run the commands via FPTW64 (v11) in order to get those dumps. I didn’t face any error while getting the dumps. There are two addidional screnshots attached separately, showing system info (from cpu-z) and BIOS screen overview.

Well, any help will be greatly appreciated.

PS:I had to create two zip files because there is upload size restriction. 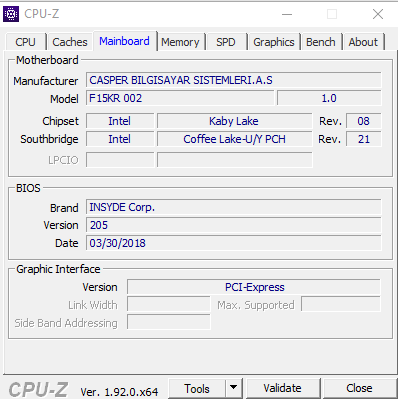 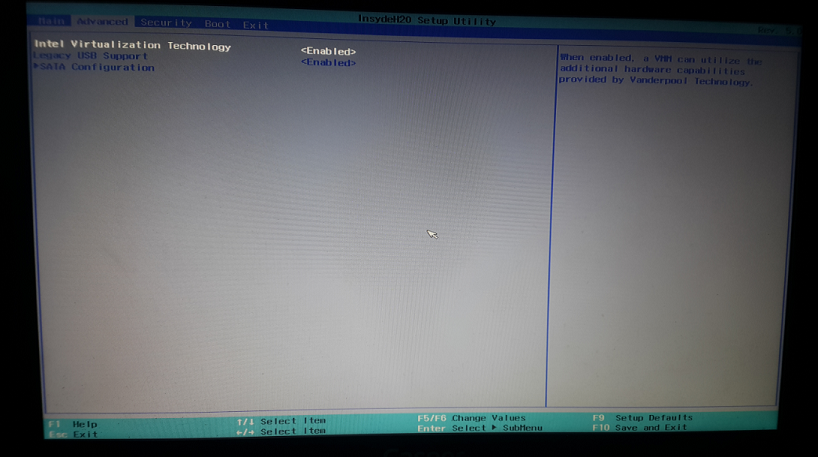 @gotinsyde - Please do the following below, show me error you get at step #2
Please also link me to the stock BIOS Download page for this system

If you have already modified the BIOS in ANY way, you will need to re-flash it back to factory defaults using factory method (NOT FPT)!!!

If you do not have Intel ME drivers installed, install them now from your system driver download page, then start over here after reboot.
Check your BIOS’ main page and see if ME FW version is shown. If not then > DOWNLOAD HWINFO64 HERE <

Once HWINFO is open, look at the large window on the left side, expand motherboard, and find the ME area.
Inside that section is the ME Firmware version. Take note of the version. (ie. write it down or get a screenshot)

Once downloaded, inside you will find Flash Programming Tool folder, and then inside that a Windows or Win/Win32 folder (NOT x64).
Highlight that Win/Win32 folder, then hold shift and press right click. Choose “open command window here” (Not power shell! >> * See Registry file below ).

If you get an error, reply to this post with a screenshot of it, OR write down the EXACT command entered and the EXACT error given.

((If “open command window here” does not appear, look for the “Simple Registry Edit” below…))

Now you should be at the command prompt.
You are going to BACKUP the factory un-modified firmware, so type the following command:
Command: " FPTw.exe -bios -d biosreg.bin "

>> Attach the saved "biosreg.bin ", placed into a compressed ZIP/RAR file, to your next post!!! <<

Right after you do that, try to write back the BIOS Region dump and see if you get any error(s).
Command: " FPTw.exe -bios -f biosreg.bin "
^^ This step is important! Don’t forget! ^^

If you get an error, reply to this post with a screenshot of it, OR write down the EXACT command entered and the EXACT error given.

Here is a SIMPLE REGISTRY EDIT that adds “Open command window here as Administrator” to the right click menu, instead of Power Shell
Double-click downloaded file to install. Reboot after install may be required
> CLICK HERE TO DOWNLOAD CMD PROMPT REGISTRY ENTRY <

If the windows method above does NOT work for you…
Then you may have to copy all contents from the Flash Programming Tool \ DOS folder to the root of a Bootable USB disk and do the dump from DOS
( DOS command: " FPT.exe -bios -d biosreg.bin " )


Never mind, I see error 368 in your uploaded package! Please wait, if you are reading this now, I will edit in further instructions shortly
Edit - Please download the following package, and run the command below from each versions folder that directly contains it’s exe.
Once done, copy the entire folder somewhere, delete everything but any created vars.txt and then repackage this and send to me, this way all created vars.txt remain in place in the folders of the version that created them.
http://s000.tinyupload.com/index.php?fil…732875438124725

I’ve just done what you instructed me to, then attached the .zip file containing the folders with vars.txt inside of each. Also, there is a screenshot showing the commands and results. However, one of the commands returned error along with the parsed vars.txt.

Thank you again in advance for your kind help. 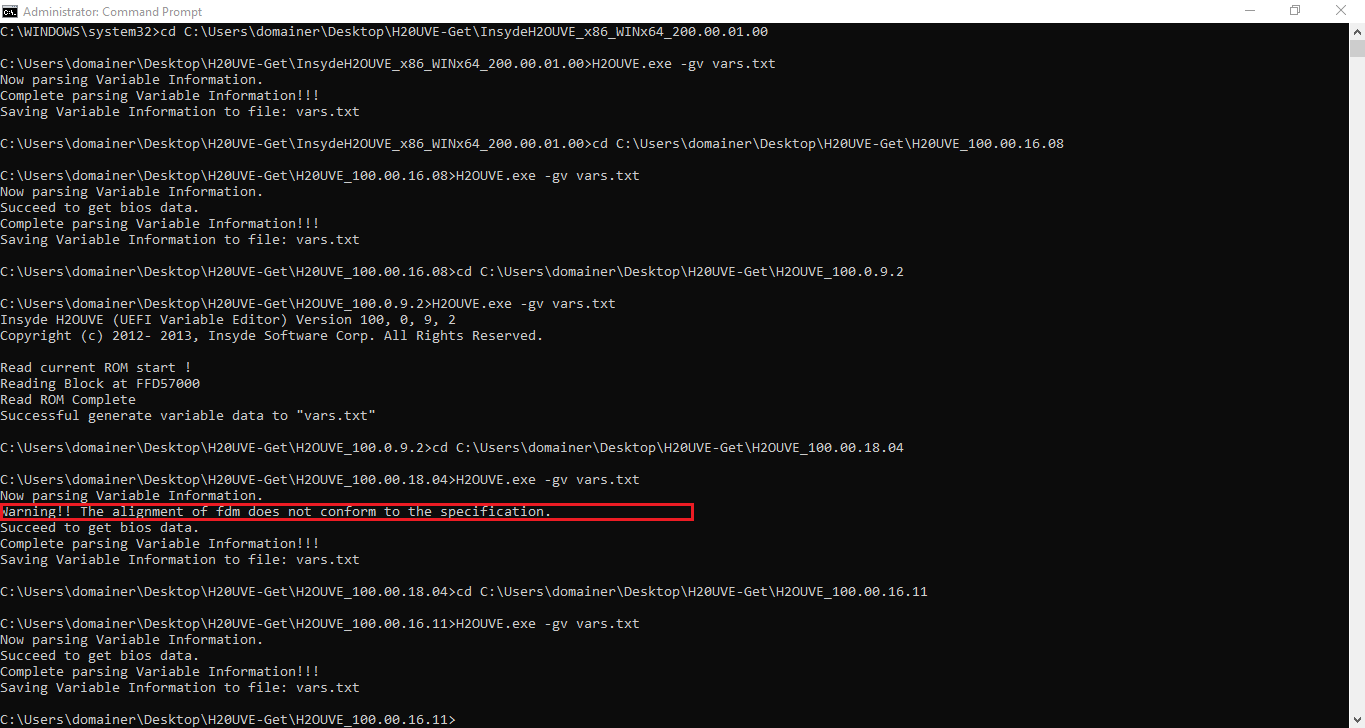 @gotinsyde - You’re welcome, and thanks! Here, now put this varsm.txt back into the same version with exe that created it (100.00.16.08), and then program back in using the command below. Then toss out the previously created BIOSreg.bin, or move it somewhere else, so you don’t get it mixed up with new one.
Then, redo FPT steps #1 using a new biosreg name (like biosregnew.bin) and #2 above, if you get success at step #2 now, then send me new biosreg file.
http://s000.tinyupload.com/index.php?fil…356345952989858

I may not be able to unlock the menus, I am not pro at Insyde BIOS. I found one possible area that may unlock, but I am not 100% sure.
So, it may be best, once you do the above and have success, that you then ask the guys over at BIOS-mods.com to unlock for you and tell them you don’t need programmer because above method works instead.

H2OUVE has given output containing some lines ending with “Set Failed!”

Yes, sorry, I forgot to mention, when writing back varsm there will be long line of success/fail, this is normal/expected.

So, you got success now with FPT step #2? If yes, Do you have flash programmer? If not, then probably best for you to ask for unlock at BIOS-mods.com forum, in case my suspected unlocked edit is wrong and it bricks BIOS.
Make a thread and ask, Dudu2002 will probably help you, he’s great at Insyde BIOS unlock. Tell him you do not need flash programmer, already unlocked and confirmed FPT BIOS region write back is successful.
If you do not want to wait for them to help, I can send you file which may unlock it, but it’s also possible to brick the BIOS, so I suggest you ask there unless you have programmer just in case I am wrong and it = brick BIOS.

No, I don’t have a Flash Programmer. Actually, I am just a bit better than a regular pc user, so there is no specific tools on my table.

I just wanted to be able to control my BIOS freely.

Also, I have previously opened a thread in Bios-mods and asked for support on this issue. However, someone who is incompetent with the same model device as me before, had requested BIOS support in a very ridiculous language and there was no response under the thread. And my thread was merged with his, so I thought I wasn’t going to get any response to mine

Well, anyway, I am going to give it a second try.

And also this one, “Make a thread and ask, Dudu2002 will probably help you, he’s great at Insyde BIOS unlock. Tell him you do not need flash programmer, already unlocked and confirmed FPT BIOS region write back is successful.” I thought I am still at the first step. Do I have an unlocked BIOS at the moment? Does this mean that unlocked BIOS is one thing and “unlocked/revealed” BIOS features is another, which requires another step? Please excuse my ignorance.