I’m hoping to find someone who would be willing to share a working BIOS dump for the Lenovo X1 Extreme Gen 2. Motherboard code is LPM-2 18809-2.

The P1 Gen 2, is similar but I believe not the same as the X1 Extreme Gen 2. I haven’t been able to find a full schematic for the X1 but a schematic of the P1 Gen 2 shows:

Here are some related files.

MediaFire is a simple to use free service that lets you put all your photos, documents, music, and video in a single place so you can access them anywhere and share them everywhere.

Why a second thread? And why not linking to the help you already got at badcaps?

Well I suppose the two threads here were for two different things; general help request for bios problem, and a [REQUEST] for a bios dump for this specific model of laptop.

I was inspired by this post. Of all the BIOS forums I’ve ventured to, there was a high level of technical experience shown on that thread. I have been getting great help from Badcaps, especially from SMDFlea, but so far I haven’t been able to find a bios dump specifically from a Lenovo X1 Extreme Gen 2 Type 20QV with motherboard LPM-2 18809-2. I’m at the end of the road at Badcaps in terms of getting help and I wanted to see if there is anyone here who might be able further assist.

My situation is very similar, if not identical, to this post. You may have an answer to my overarching question: Can a bootable BIOS be made with what’s available from Lenovo’s BIOS update executable? Is there a way to create a proper BIOS, perhaps with Intel Flash Image Tool, without a full BIOS backup or dump to work with?

What’s the machine doing right now when you power it up?

What’s the serial number of the machine?

Which chips did you program / overwrite?

Thank you for the reply,

I do apologize if my posts seemed a bit ‘spammy’. It’s been hit or miss finding help from various forums and I suppose my strategy for posting may have reflected that.

There are definitely many different configurations out there. I believe this may be why it’s been challenging finding a suitable firmware for this machine.

I think what is making this especially challenging is that there are at least 4 different variations of this machine that all share hardware/firmware types:

I’m not sure what’s driving the difference between the sub-models. I thought it could be by processor model but I determined that’s probably not the case after looking through the CPU manifest that comes with Lenovo’s firmware update. Not surprising, but there are three different processors that are shipped with these machines:

In other words, as an example, looking at the contents of the BIOS Update Utility for linux for BIOS update package 1.43, the n2oul25w.zip has three cabinet files:

So, when it comes to these update packages I think there’s enough evidence to say,

Inside each BIOS Update Package

(1) Firmware update froze, powered off machine by holding down power button.
(2) Turning machine back on by pressing power button; power on button light turns on, keyboard lights up but is unresponsive, cooling fans turn on high constant speed. Holding power button down does not turn off machine, must disconnect battery.

Behavior of machine after programming/overwrite

(1) Absolutely nothing appears to happen. No lights, no fans.

I don’t have a multimeter, (but I should). However, I noticed this the other day.

When I do not have power supplied via charging cable, and when I have the battery connected to the motherboard, and the rest of the conditions are the same (programmer clipped on to chip but not supplied power via usb), then the red ‘power’ indicator light turns on only in this instance; when the power button is pressed, the red indicator light turns on for a few seconds then turns off.

In other words,
tl;dr

To sum this all up:
tl;dr

Very long winded, I know. I hope this is all helpful info. It’s not dire that I restore this laptop to working condition … but I’d really like to

Edit: I also realize that initially this was most likely a Thunderbolt 3 firmware problem that I assumed was a BIOS problem, which is why I chose to go after the BIOS chip first. Being inexperienced, I made the mistake of not making backups of the BIOS chip before erasing/reprogramming.

Thanks for the serial, there’s a reference to this serial in the file Lenovo X1 Extreme Gen 2 Type QVTestRead1.bin

There are references to the bios versions N2OET40W, N2OET56W and N2OET57W in the same file.

And yes, the bios package does contain an EC firmware, too.

In MXIC 25V8035F (TBT).bin there’s a reference to N2OTG14W meaning that this is the firmware for hybrid graphics. The content seems structured and the firmware seems to be identical to files of n2otk08w.exe. BUT the redone file from badcaps has some differences, first part of firmware at 0x4000 was redone.

The GbE is still readable in the file you posted, unfortunately there are just 2 different MAC addresses in all the firmware images, one of them identical to the MAC of your dump. That would mean that there’s just one other image around which could serve as example.
Since the ME configuration of your machine no longer can be read there’s a chance the config in the other image is not correct since it seems to come from a P1. Leaves a machine rarely completely dead, but not impossible.

In addition the behaviour the machine is showing now looks very much like EC firmware gone. There should definitely happen something when you press the power button.

Often for this type of bios the EC firmware is copied in the padding in the beginning of the bios region and gets copied afterwards into the EC chip. If there’s nothing or a corrupt EC firmware or something completely different it’ll overwite the EC firmware, normally destroying the ability to update itself via bios region…
But since you don’t have a valid dump there’s much room for guessing here.

Hello, I need a clear ME version of this BIOS. Could you please clear this one? Thank you!

Try this file as a desperate try, emptied NVRAM, put EC firmware where it might fit

But again- I think this ‘update from bios’ is dead already and you’d need to reflash the EC firmware directly.

Unfortunately, that 56Clean1285.zip file didn’t work either. I hadn’t seen that post from repairlap.com, so thank you for sharing with me.

I was thinking the same thing about the EC firmware being destroyed/corrupt. I think at this point it’s probably best that I quit here.

Just for the sake of knowledge and repair, I may continue on with this project in the future. If you don’t mind sharing, I’d like to know what needs to be done to program an EC. How/where should I get the files?

I found this post which seems to explain things fairly well.

Thank you so much for taking the time to read over my posts and direct me with some expert thoughts and advice.

I just noticed this broken corner on a small chip. Do you think this might be causing any problems?
broken chip.zip (967.4 KB)

The damaged chip seems to be a coil connected to the network chip according to the plans, so I don’t think it should keep the board from booting. 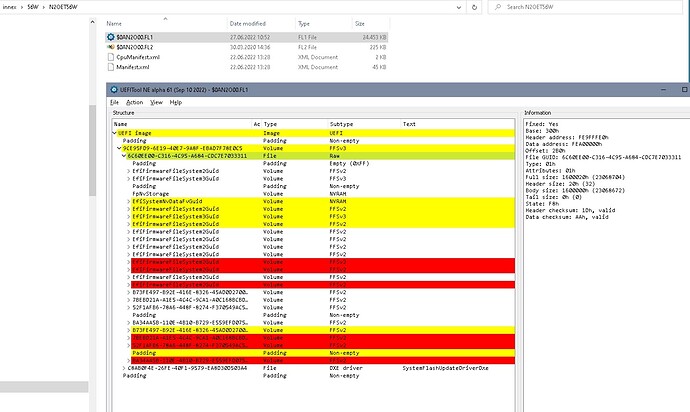 The FL2 file is the EC firmware with a key at the end, which normally will be cut. Many notebooks put this firmware in the first padding of the bios region- therefrom it’s taken by the EC chip / the PCH / whatever and programmed into the EC chip or it’s SPI.
However- in the Lenovo update there’s a separate flash program for the EC. Even if I couldn’t find information regarding your specific EC chip this program is dated from 2019 (copyright 2012) so your chip might not behave very different to older EC chips.

This program has a built in config that doesn’t seem to fit for your config since it refers to a file N2LHT29W.bin (Your EC is N2OHT**W)

And the program has some options:

So it might be possible to pull a dump of a working machine.

Question with the delivered EC firmware might be if it’s complete or if it’s just the static part and some machine specific parts aren’t included and not automatically rebuilt.

In addition you have already damaged hardware, it’s more and more unclear how damaged this board got in the process.

So if you want to use/ repair this machine:
Buy a used motherboard, dump everything you can before starting it up, try to dump the ec firmware with the Nuvoton software. Then you might try to recover your board with known working firmware- but there may still be damage to the hardware…
There were som hacks using a CH341 on a keyboard port, too, but I don’t know for which chips this worked. I don’t have much knowledge about this type of work, I think you’ll find more regarding EC programming at badcaps.

Would be an interesting project…