I just bought a new adapter but I’m wondering if I can use it in my motherboard. Specs:

I’m currently using a simple LSI Jbod adapter for 8 SSDs. But I want to upgrade to NVMe for music production. I’m not booting off the NVMe’s or wanting RAID, I’m using a regular SATA 3, 850 pro ssd for Windows 10 OS. These are strictly to be read from. I realized after the fact that this was cheap for a reason; doesn’t have it’s own bifurcation chip.

Here is my adapter:

Also, is bifurcation the norm for new moterboards, or am I going to have to be picky when I upgrade my mobo/rig?

@markgeraci99 : Welcome to the Win-RAID Forum!
To be able to use your 4x M.2 to PCIe adapter on your current X79 chipset system with more than 1 NVMe SSD you will need a bifurcation modded BIOS. Only a few modern motherboards do natively offer the PCIe bifurcation feature.
Regards
Dieter (alias Fernando)

Does my Mobo have a modded BIOS for bifurcation?

There is a topic on in, but no files available since its user own links and cant be recovered, Lost as been offline since January, still there’s some guidance there on the subject.

Thanks for alll that info. I just have a few more questions:

1. If I get an adapter with bifurcation onboard, will there be any bottlenecks (assuming all drives are only pcie 3.0)?

PCIe M.2 MVMe adapter with ITS OWN bifurcation controller… its all up to him and what it requires to operate.
All multiple PCI NVMe adapters need bifurcation, on it or motherboard support, else only one drive is accessible. The additional PCIe NVMe adapters (With controller or not) depends on motherboard bifurcation/resources allocation/cpu/pcie lanes.
The question is not the PCIe4.0x4 drive (limited to 3.0 x4) on the motherboard, as doesn’t depend on it, it depends on the adapter itself. So correct only gets 3.0x4

Ok thanks, I will make sure a DUAL has it’s own bifurcation, or maybe I’ll just get multiple singles.

So then this chipset and motherboard supports NVMe drives so long as it’s via PCIe? I plan to have one as main OS drive, then the rest as storage. I am hoping there is no bottlenecks with IOPs, or Read/Writes. I’m assuming this depends on the adapter, but maybe also my CPU?

This is an Intel X79 chipset with PCIe 3.0 support using Intel 3rd Gen processors Ivy Bridge from 2012, this motherboard has not mSATA/mPCIe or M.2 slots. 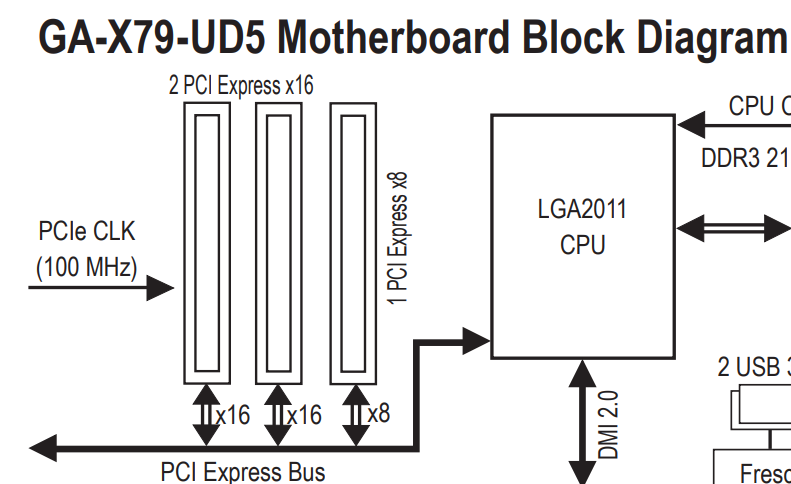 Do you see any M.2 connectors for NVMe drives on the motherboard? You don’t so yes the only way to add regular M.2 PCIe drives IS the use of a M.2 PCIe adapter… what is your doubt to make such a question?
Now careful with adapters on sale that has VROC and BF depending on the chipset/cpu generation… they will not work as intend in other non-compatible, and generally speaking, VROC is an Intel storage technology based on chipset/cpu and
common Bifurcation controllers are other. These are usually for chipset like the X299/Xeon cpu.

The performance will depend on the drivers, adapters, drives and the motherboard itself with all its attached devices present on user system.

Yes I know NVME PCIe is the only way to use the drives on my motherboard. I was worried my CPU and Motherboard was not compatible in general, because it’s so old.

Can you please link me to a single AND dual adapter that will work properly with my board? I am getting 4.0 drives for my next build, probably Ryzen 7000. I don’t mind bottlenecks on my current computer, this is a band aid upgrade until the future. I will eventually own 4 of these, strictly for reading, not writing:


Also, is it possible to use one of these drives as my operating system, via PCIe adapter?


FYI, I will have one of these in the future, running 2tb nvme x4 (however it will be 4.0 compatible adapter)

No i cannot point a specific model, there’s a lot of cheap and expensive adapters on the market working almost 99% without compatibility issue.

In future Ryzen platform you will have better results using the PCIe 4.0/5.0 M.2 sockets for max performance with your future Sabrent drives, the PCIe M.2 adapters will be bottle necked in this case, else find PCIe 4.0 adapters.

For using OS in NVMe drives on adapter, your current system X79 needs the NVMe mod presented by Fernando: [HowTo] Get full NVMe support for all Systems with an AMI UEFI BIOS

The ADWITS Quad M.2 NVMe SSD PCIe has its own ASM2824 chipset that offers a PCIe 3.0 x8 upstream port as well as four PCIe 3.0 x4 downstream ports, his performance only depends as i posted before,
upon cpu/chipset/motherboard resources/lanes available.

I’m reading all these posts about booting from NVMe and possibly Bifurcation for a PCIe nvme 4x adapter. Is this possible on my Gigabyte board - GA UD5 x79?
I want to have a boot drive in my PCIe 3.0 slot, then hopefully bifurcation for a NVMe adapter running another 4 NVMe drives, just in regular Jbod mode for storage.

I don’t care about the bottleneck of 3.0, I’ll have a new adapter and Ryzen 7000 rig in the future. Please let me know, thanks!