M2 slot M2_1 on this board runs natively at PCIex4. If you switch it to SATA mode - port SATA6G_2 will be disabled - I am not running in SATA mode or using any SATA M2 devices. By all accounts - I should be seeing PCIex4 speeds on my 970 EVO Plus and comparble speeds on the 860

I have installed the Samsung NMVe 3.3 driver per Fernando and the recommended AHCI/SATA driver for this board - v18.31.5.1038 WHQL (also per Fernando.)

However - after the build yesterday - this thing is horrific to use. The PC is choppy, pokey and takes easily 2 minutes to both shutdown and restart.

Samsung Magician is reporting that both drives are running at the right speeds and are using the Samsung driver. Here is the NMVe:

But CrystalDiskMark is telling me a whole different negative story: 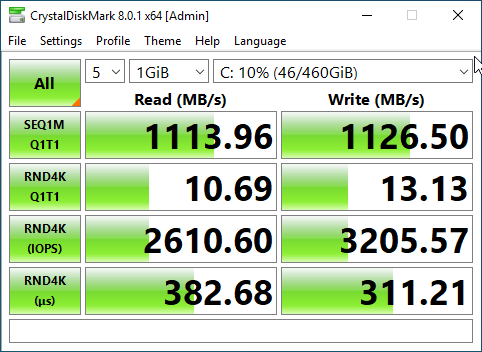 This should be averaging around 3000?

and the M Drive is no better 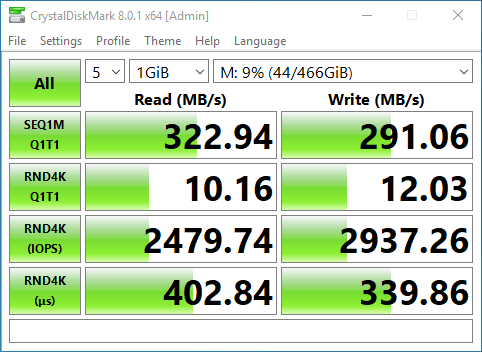 I am baffled by the slowness - and do not know what I am missing here. Everything seems to be connected and set right. Unless the resource sharing is 100% wrong in the manual

Now - does “SATA MODE” mean having drives connected to SATAG_1 and SATA6G_2 might killing the NMVe performance? (Due to sharing). OR does SATA Mode mean using a SATA-keyed M2 Device in the M2_1 slot vs an actual NMVe keyed device?

I am truly drawing a blank.

Need to get this PC back in shape fast (It’s a work box) and right now - it’s basically unusable.

Appreciate any tips from the field.

@SonicMojo :
Within the start post of >this< thread you can find some tips about how to boost the AHCI/NVMe performance.

Now - does "SATA MODE" mean having drives connected to SATAG_1 and SATA6G_2 might killing the NMVe performance? (Due to sharing).

You can easily check it by temporarily unplugging the Samsung 860 EVO SSD and redoing the benchmark test.

Thanks for the update - but I have done all of those steps - some of which are very old/outdated for modern gear and should be updated.

I did move the SATA drives to SATA3 and SATA4 but that made no difference whatsoever. I have checked the CPU for Spectre/Meltdown mitigations (which can slow things down a lot ) but none are noted.

This PC just feels "wrong" on a bunch of levels - this board with this CPU and the RAM - should be flying out of the box with little to no tweaking whatsoever.

The only other "non-standard" item of note right now is the version of Windows 10 - which is Windows 10 ENT LTSC 2019 - which by all accounts (and my last z370 build) is by far the fastest and most responsive version of Win 10 available. It has all the bells and whistles stripped back and is perfect for a creative workstation. But right now - it feels like it has a 10 pound rock strapped to it that it is dragging all over the place.

FWIW: I actually did the OS install twice this weekend - the first go round was with Windows 10 Pro for Workstations which I test drove on Friday but thought might have too much overhead (Windows Store, tons of extra services running). I did not take the time to benchmark the drives on Friday and reverted back to Win 10 LTSC yesterday. But I can say - the Friday install was fast and furious and the drives seemed to be operating at the proper speeds. The box also restarted in lihgtning fashion - like 20 secs to restart back to the desktop.

But today - wow. It is painful. Something is simply not working right and I have no idea where to look.

Sata0 is the default,there should not be a reason to change unless its somehow not working/broken
could you clean install Windows while only 970 EVO Plus NVMe is plugged in.you can plug 860 EVO in after installation is completed.all you need is an usb and media creation tool from microsoft.dont forget to delete all partitions
then install latest drivers for your devices

Thanks for the update.

I had 2004 update on the machine as one of the first things I did - even before anything was installed on it so all good.
I have the latest Samsung drivers for NVMe (Per Fernando) - all good.
Samsung Magician - there WAS a firmware update for the main C:\Drive that was applied as soon as I install Magican. The EVO 860 had no updates reqired per Magician.

Connections - I still have the 970Plus on M2 slot M2_1 on the board and the EVO 860 SSD and my Firecuda HDD are sitting on SATA3 and SATA4. There is SATA0 on this board. SATA1 and SATA2 were used in the first pass but are currently not connected.

Windows Install - in the two OS installs I have done so far - the 970 has been the ONLY drive that has been connected. In the first pass - the drive was brand new out of the box (Windows 10 Pro for Workstations). For the second install - I used the Samsung Magician Secure Erase tool and reset both the 970 and 860 to factory. Then I disconnected everything - except the 970 and installed Windows 10 Enterprise LTSC 2019. This is where I am at now and the read/write is brutal - it’s not even half of what it should be.

While I am not adverse to installing Windows again - this machine is a very complex install (It’s an audio DAW) which means it takes the better part of a day to get it to a working state. For the start of this week - I want to use this super slow situation to figure out what is wrong here - something is really holding up the speed and I hope to find it before tearing it all down again and get burned later.

I have done all these steps using the exact version number listed and following all the advise in the last step “How to boost”.

By all accounts - this machine should be racing right now - but it is running like a snail - even with all these driver suggestions.

My plan for today is to try a couple of different things (Without messing with Windows):
1. Move the 860 and Firecuda back to SATA1 and SATA 2
2. Move the M2 to the other slot: M2_2 (which takes out SATA5 and SATA6) and move my DVDROM to SATA3
3. Ensure the M2_2 slot is running in PCIe x4 but setting it in the BIOS
4. Test.

If this does not change the speed - then the focus has to be on the 970 itself.

I have been following a few thread in other forums - like this one
https://www.techpowerup.com/forums/threa…-speeds.274572/

Where specific Samsung drives are behaving oddly - just like mine.
There must be some odd combination of hardware, drivers or something else that is causing this - hoping I can find out what it is.

Have you tried Phison and/or Microsoft generic NVMe Drivers?
and reminding again,please update your bios if you have not already

@onuracengiz :
BIOS - see # 1 under "To your questions"
Not exactly sure what Phison NVMe drivers are - and I could revert to the MS drivers.

EDIT: Reverted to Microsoft NVMe drivers - no change. Actually it’s worse now (than with the Samsung driver) - check out these pitiful numbers: 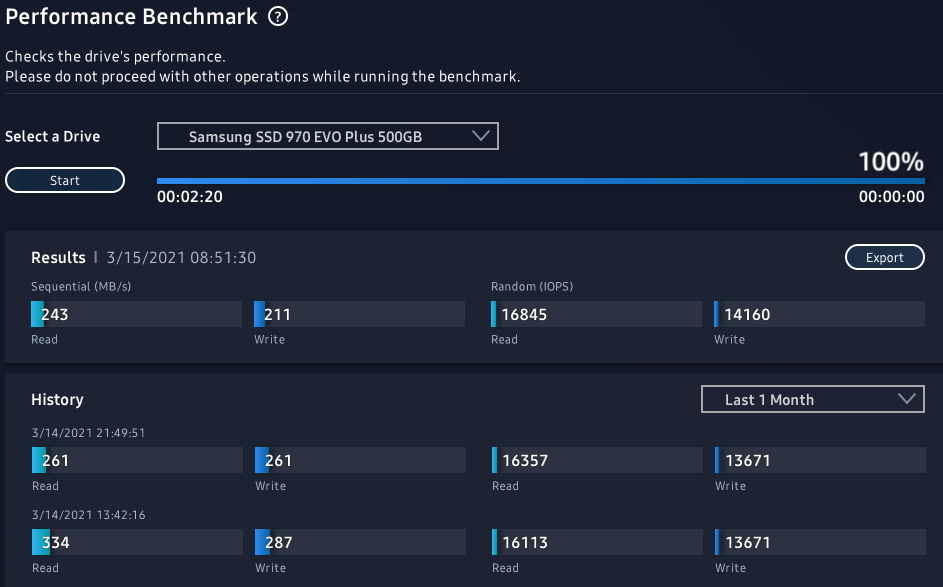 Appreciate any guidance on this.
Cheers!
Sonic

Disable the “Fast Boot” and “Secure Boot”,also disable other drives from bios then,run the test again.if you see no change,go here;
Recommended AHCI/RAID and NVMe Drivers
Find and install Phison NVMe drivers.
If there is some improvement,try samsung’s again without changing bios settings 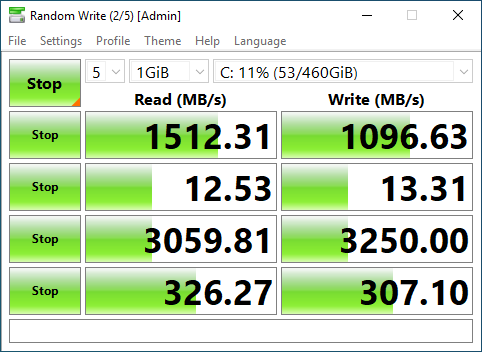 But it is starting to look like this M2 port is running at half speed (At best) even tho the system thinks it’s running at PCIe x4?
My next move is to swap M2 ports and see if that makes any difference - I am hitting a brick wall here so far.

i was curious so i have checked the bios file. although nothing was out of order.since having the file already,i have updated it nonetheless.keep a back up nearby just in case

Disable the “Fast Boot” and “Secure Boot”,also disable other drives from bios then,run the test again.if you see no change,go here;
Recommended AHCI/RAID and NVMe Drivers
Find and install Phison NVMe drivers.
If there is some improvement,try samsung’s again without changing bios settings

Changing those options will not make the slightest bit of difference to SSD performance. Fast Boot & Secure Boot relate to system checks during POST.

Changing those options will not make the slightest bit of difference to SSD performance. Fast Boot & Secure Boot relate to system checks during POST.

I concur - the BIOS is solid - no issues there (at least I do not think there are).

As far as the Management Engine - I believe I am current - but that ME page is so confusing - I have no idea what I should install - or what version I need to be at.

And I am having so many issues right now - I am very unsure as to whether I install the ME Interface from ASUS or the one from Intel?

get the intel one (there are just the same anyway) from related thread.
latest driver version is v2107.15.0.2173 DCH
latest firmware version is 14.1.53.1617 Consumer H A
all in here; Intel (Converged Security) Management Engine: Drivers, Firmware and Tools
you can try the modded one aswell.should not cause you any trouble (has updated raid module)

Even the EVO 860 is barely running - I enabled RAPID status for the drive and took a snapshot with Magician - sad result:

Seems it does not matter what I do

Next up - will revert the AHCI driver back to "in-box"

Gonna take a lunch break and move some components around…

Here is one more look at the M2. This is with ALL drivers (NMVe and AHCI) set to default in box. And for good measure I reset the BIOS to optimized Defaults: 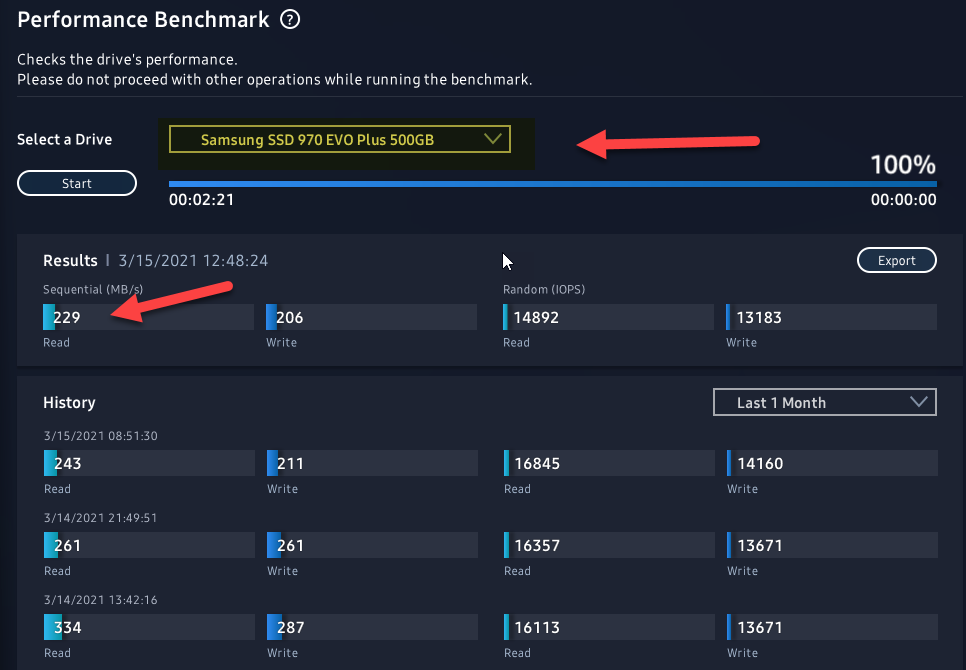 If you look at the history - this drive is simply fading away. Of the four performance runs I logged - it is getting slower and slower as I change bits here and there

Next up - going to bench it and move the M2 drive and SATA connections around.

And what about updated bios?

And what about updated bios?

Bios has been at 2004 since before anything was installed. That was the first thing I did back on Friday.

I am wondering now if I might want to flash back to an earlier version tho.

FWIW: I benched the unit and removed all my PCI cards and reseated the M2 in it’s original slot (M2_1) to no avail.

If that does nothing - I am going to flash back to the BIOS before 2004.

I meant my updated version on raid mode

If an earlier version works better,we can mod that one too