Some information about ME v.11 mods PLS

Hey everyone, I recently got a BIOS and FD unlock from Lost N Bios, wich works great! Now, today I came across an old thread at techinferno about how to unlock BCLK alterations by flashing a ME region edited with FITC, all was done on a FIT v.8.

I’m wondering if this is possible on a ME v.11 system… I opened a ME DUMP on FIT v.11 but could not find the same options as in FIT v.8.

Also, is there any way to give BIOS BCLK and multiplier control over a CPU that doesn’t allow those alterations by nature?

To summarize, my goal is to change BCLK or multiplier of an I5 7200U beyond the current limit, and my question is if this is possible.

thanks in advance, guys

@fairestmeat - FITc v8 info applies to ME FW V8, none of that is relevant or possible in V11 ME FW, sorry

Almost all CPU you can Bclk edit, as long as BIOS provides it, but most modern CPU this is tied to PCI/PCIE/SATA clocks to system messes up much past 103, and Intel has hard locked some CPU’s or chipsets etc to only allow 102/103 max anyway
So really just a waste of time to even consider anymore, Bclk/FSB overclocking has been officially killed now thanks to Intel.

I see… That’s a bummer! But thanks for clarifying.

Same thing about multiplier, I guess? I mean, no way to bypass the x31 limit of my cpu

Also, there is something i’m curious about…there is an option in BIOS, that says “disable ME” the description is worthless, so i dont get what this actually does, i think is under ME config tab

ME Re-Flash? If yes, that is for disabling me temp for one reboot so you can fix ME FW if corrupted.
Careful messing with ME FW or you will corrupt it if you do something wrong, then that can mess up your fans, memory speed/timings, and even downclock CPU sometimes too.

No, its something called ME state, under pch config, the description says that If disabled ME FW Will be temporarily disabled, I just don’t get why is this for, and how would affect the system.

Also, what could I get from ME update? Bug correction, optimized settings, etc, is that It?

Yes, that is the exact setting I mean, located at >> PCH-FW Configuration >> Firmware Update Configuration - It’s exact name is >> Me FW Image Re-Flash
I explained above what it’s for

Actually, the setting I’m talking about is one menu before firmware update… It says: ME state and the description is exactly: “when disabled ME will be put into ME Temporarily disbled mode” (I’m sending a pic of it).

I’m just curious about this disabled ME FW, how (if) the system would work without a ME, and the purpose of it. I imagine it’s not really a ME disable, just a strange choice of words… 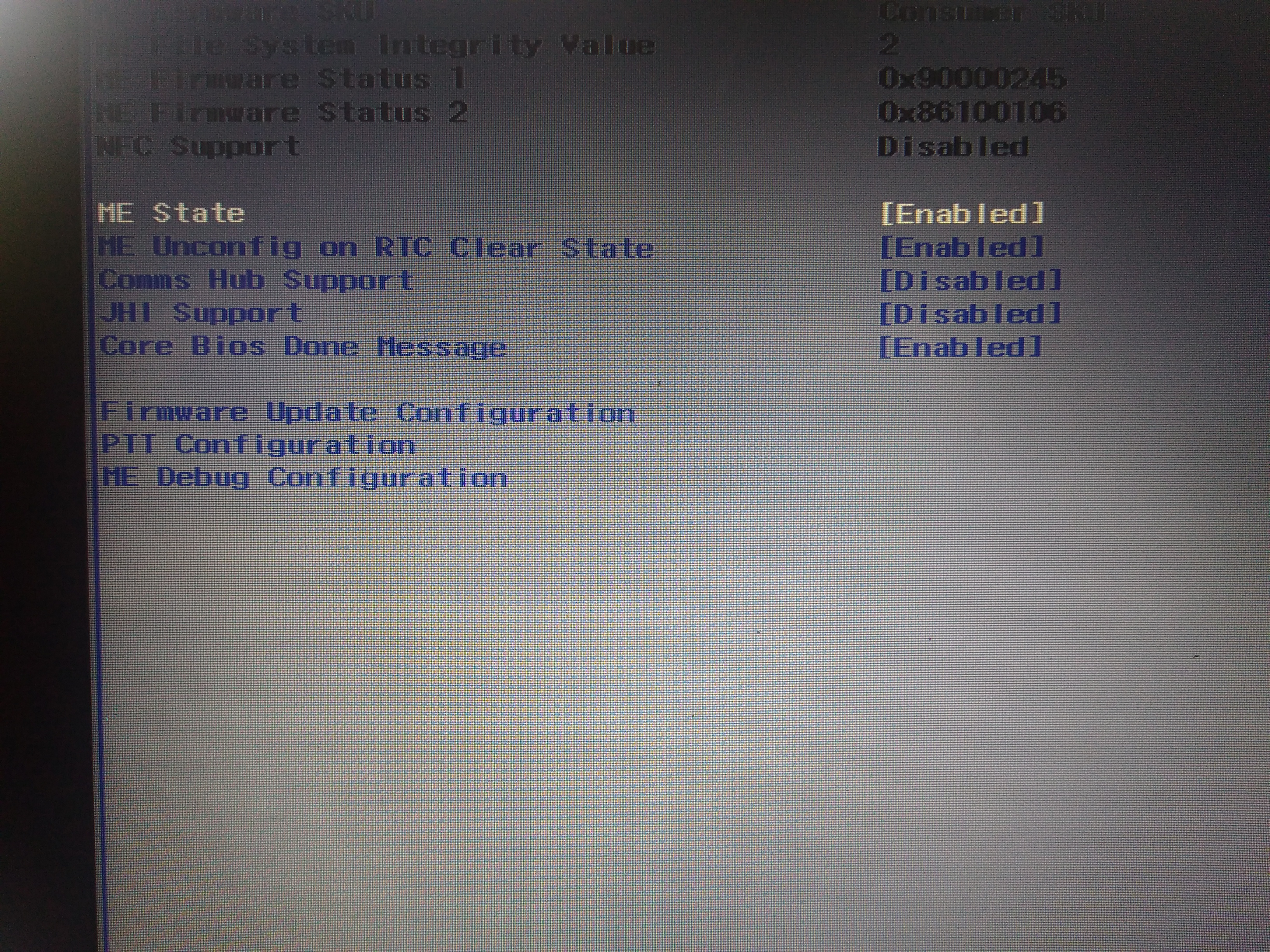 Ohh, sorry, I thought you were in the submenu down below that. Yes, looks like that is a direct ME FW disable option too, that may remain until you set it back, unlike the one I mentioned (it only stays for one reboot, then resets itself, or at least should

Ohh, sorry, I thought you were in the submenu down below that. Yes, looks like that is a direct ME FW disable option too, that may remain until you set it back, unlike the one I mentioned (it only stays for one reboot, then resets itself, or at least should

I tried setting that exact setting to Disabled and it stuck for multiple reboots but made my boot times go up to 30 seconds + and disabled my sound completely … there must be a better way to remove this backdoor?