@ jackshell:
Meanwhile I have tried to find out the reason for your issues after having updated the Intel RAID ROM module of your MSI mainboard BIOS.
Result:
The replacement of the original Intel RAID ROM v10.5.0.1034 by the v12.7.0.1936 went flawlessly and without any error message.
After having extracted both BIOS files (the original and the updated one) with the PhoenixTool v2.1.4 and compared both files named A062CF1F-8473-4AA3-8793-600BC4FFE9A8_1_126.rom by using HxD, I didn’t find any clue for an internal checksum control system regarding the PCI ROM modules of the CSMCORE file.
By the way: AFAIK the user will get an error message while trying to insert a checksum sensitive module with the wrong checksum or while tying to flash such BIOS into the mainboard BIOS chip.

You have
a) to know the specific checksum method, which has been chosen by the mainboard manufacturer,
b) to find the localisation, where the internal checksum has been stored and
c) to correct either the stored checksum itself or to change some (dummy) hex codes to customize the checksum with the result, that it will be the same as the original one.

EDIT:
On >this< site someone is offering an already updated BIOS for your mainboard. Unfortunately I was not able to download the file, because the registration procedure didn’t work. Maybe you can get this modded BIOS and look into it.

Remarks (in case of success: noticeable advantage, in case of a failure: possible reason) :

The board had an insanely old version of the AHCI ROM (v1.0.something, dating from 2007), despite having the latest BIOS from 2011.

After stumbling on Fernando’s posts on win-lite about BIOS modding and how it was relatively easy to update the AHCI ROM on AMD platforms I decided to give it a try. Took the latest MSI BIOS and MMTOOL, replaced the DEV_4391 PCI Option ROM with the newer AHCI ROM, and reflashed the whole thing in almost less than 15 minutes.

It works perfectly now, drive detection is much faster and the SSD is a good 20% faster than it was on IDE mode as well

Thanks Fernando ! (and shame on MSI for not updating the AHCI and RAID ROMs despite releasing BIOS updates well into 2011…)

Welcome at Win-RAID Forum and thanks for your report, which I will put into the BIOS modding success/failure table.
Why didn’t you integrate the newest AMD AHCI ROM v3.1.2.0?

Since it was a really old platform I did not want to take chances using a too recent ROM. I’ll try 3.1.2 and the RAID ROM update now.

Since it was a really old platform I did not want to take chances using a too recent ROM. I’ll try 3.1.2 and the RAID ROM update now.

Updated to v3.1.2.0 fine, but decided not to mess with the RAID ROM after reading about the whole MISC.BIN thing (there’s 10 User-Defined or Reserved modules in my BIOS and it’s hard to find the correct one to replace with MISC.BIN). I don’t intend to use RAID on this board anyways and the module is more modern (well, 2009) than AHCI so it’s not a great loss

You are absolutely right.
By the way: I will update the table regarding the AMD AHCI ROM version.

Welcome at Win-RAID Forum and thanks for your report!
I will put it into the BIOS modding success/failure table.
EDIT: Done!

Using bios version L3.05 with all the mode bios rom’s, and using all the original latest drivers, working very well.

Welcome at Win-RAID Forum and thanks for your report, which has already been added to the related table of >this< thread.

Any chance upload the bios mod for P8Z68-V. Thanks

Any chance upload the bios mod for P8Z68-V.

Why don’t you modify the BIOS yourself?
This is a Forum, where you can find all needed tools and guides, but I do not offer already modded BIOS files upon request (Note: If I would start doing that, other users will expect the same support and I will not have the time to do anything else.).
If you are too lazy to read the related guide and to modify the BIOS yourself, you may look into >this< thread, where garikfox offers already modified BIOSes for various ASUS P8Z68 mainboards.
Disadvantages:
1. Garikfox just updates the Intel RAID ROM module, nothing else. He replaces the Intel RAID ROM by the newest one, which has bee modded by me to support TRIM in RAID0.
2. If ASUS offers a new BIOS for your mainboard and you want to flash it, you may ask garikfoy for a freshly modded version. 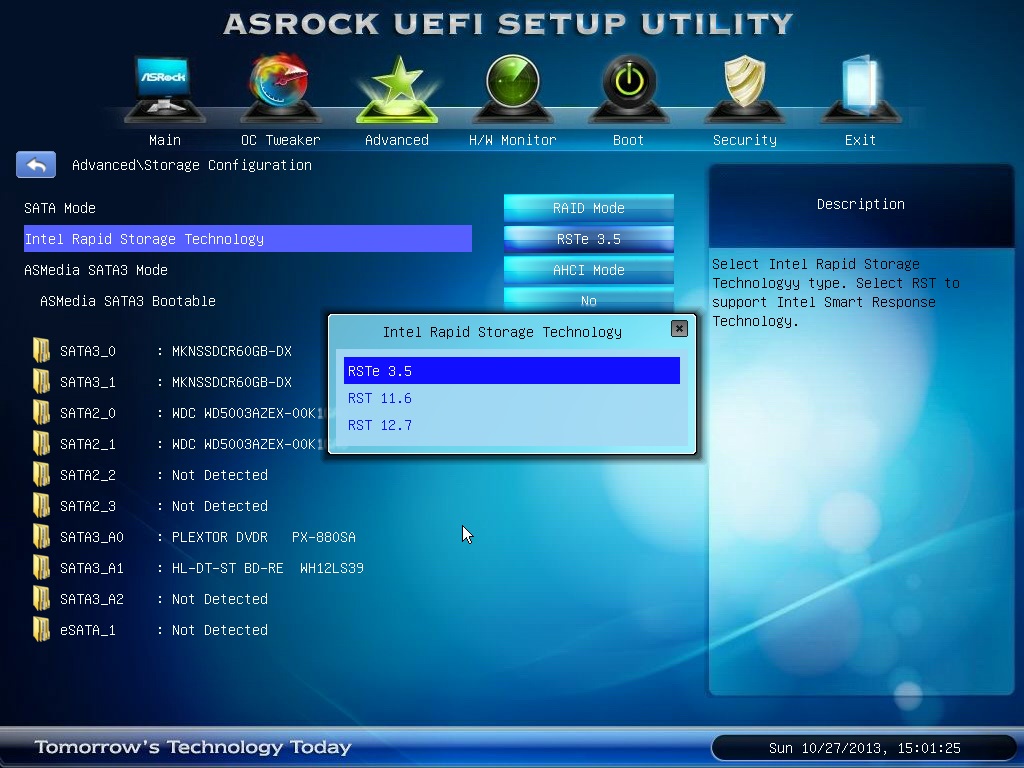 I downloaded the latest asrock BIOS V.3.20 from their site and noticed it contained ROM version “12.7” Using this BIOS i replaced the ROM with version 3.8.0.1029, Installed the latest RSTe driver version 3.8.0.1108 and flashed the newly modded BIOS. The BIOS flashed correctly and the system was able to boot to W7 after i reconfigured the BIOS from a default state and trim is now working
in my raid0 array

@ Custom Built:
Welcome at Win-RAID Forum and thanks for your interesting report.

You obviously made 2 big mistakes:

Nevertheless here are my answers to your questions:
to 1.: Maybe the BIOS doesn’t show the real RAID OROM versions, because you modded them the wrong way.
to 2.: No, it is not normal. You should ask ASRock, why they added a third Intel RAID ROM (it is for DEV_2822, but shown as DEV_55aa, which is not an existing Intel SATA RAID Controller DeviceID).
to 3.: Yes, but you have to delete the existing RSTe RAID array before you switch the Intel RAID ROM to a v11 or v12 RST version. Then you can recreate the array by using the Intel(R) RAID OROM v11 or v12.
to 4.: Usually X79 RAID0 systems have a better performance, when the SATA RAID Controller is managed by an Intel RST(e) RAID ROM v11 or v12.

@ lurch228:
Welcome at Win-RAID Forum and thanks for your report, which has been added to the “BIOS modding success/faoilure” table.