What is the purpose of this post? The X99 mainboard was the first one for me with two independent SATA controllers. Since I have found a lot of opinions (often contradictory) about these controllers (like “what drive to plug where” or “which drivers to use”) so I decided to explore this topic. That turned out to be interesting and took quite a lot of my spare time. I hope this post will give the most important tips for the other users of X99 controllers to make their life easier.

In most cases these both controllers are Intel ones (this is also considered as a “better set”) but sometimes SATA Controller 2 has a different manufacturer, such as ASMedia, which could have a significant impact on the choice of drivers and how to connect the drives in ports as ports controlled by Intel controller are usually better to use. My recommended options will refer to two Intel controllers as I know this case much better.

Two independent SATA controllers is not all the users of X99 are presented with. There are also three different controller drivers which can even be “mixed” and used together at the same time on the same system. In some “special cases” (like any non-Intel controller) there could be even more than three different drivers to use but, as I said before, I will only refer to “only Intel controllers” case. Here we have the following drivers:

As native drivers offer slower transfer rate, in most cases it is recommended to install v14/v5 drivers. Which driver to install on which controller? This is another topic to discuss:

Optical drives are “slow enough” to have them installed on controller with native drivers and they do not need any additional drivers to install to increase their performance, but you should install v14/v5 drivers for any SSD/HDD. The options depend on how many drives we want to connect, what are the drives (SSD/HDD/optical) and what modes we want these drivers to run (AHCI/RAID).

Note: If you do not intend to use RAID mode, do not install the entire driver package - use only AHCI drivers as they are less likely to have any negative impact on the system and provide a better overall stability.

Ultimately, the choices come down to three recommended options:

This post is a direct continuation of my discussion on forum. This is also some kind of summary of my two-weeks-long discussion with @100PIER and I would like to thank him very much for the patience he had to answer “all my stupid questions” I sent him. I’d also like to thank @Fernando for running such great forum and I hope my post will help at least one other forum user. The topic was completely new for me so if anyone spots any my mistakes in the above post then please let me know.
100PIER October 29, 2017, 9:17am #2

@Lex ,
May be I suggest to add into your guide the DEV IDs such as I have got with my Sabertooth X99: 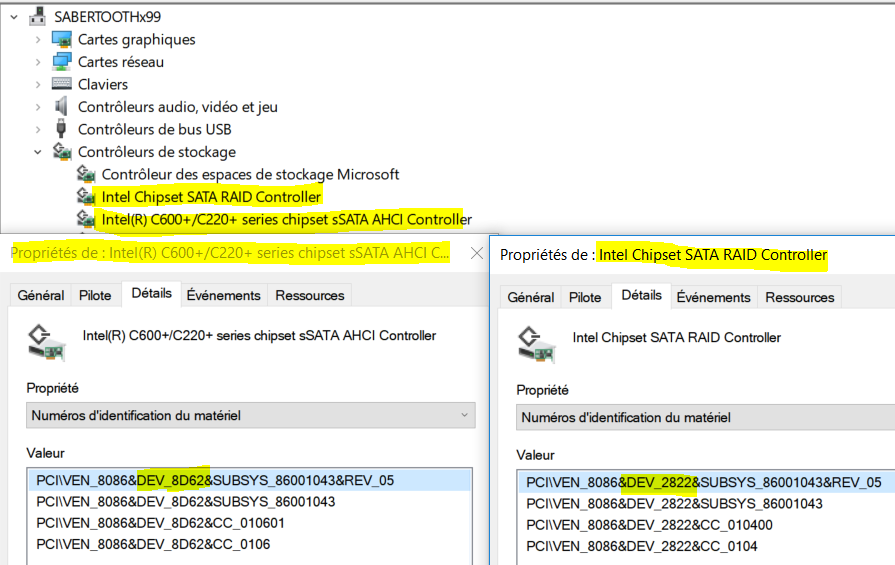 Can you check you have the same Devices IDs for your X99 platform ?

… looks like my “set of possibilities” is “more correct” one? Or maybe this website just is not correct? (but I can’t find any other similar one)

@100PIER : I've asked my friend who also has X99 platform but based on different mainboard, MSI X99A Raider, and his SATA Controller 1 also shows as DEV_8D02. No, he doesn't use RAID mode either.

Intel gives the SATA Controllers absolutely misleading names.
The X99 Chipset belongs to the C600+ Series and not to the 9-Series Chipsets.

@Fernando
@Lex
I have done 3 different tests under W10 RS3 with the different SATA mode (AHCI only or RAID+AHCI) configurations on Sabertooth X99: 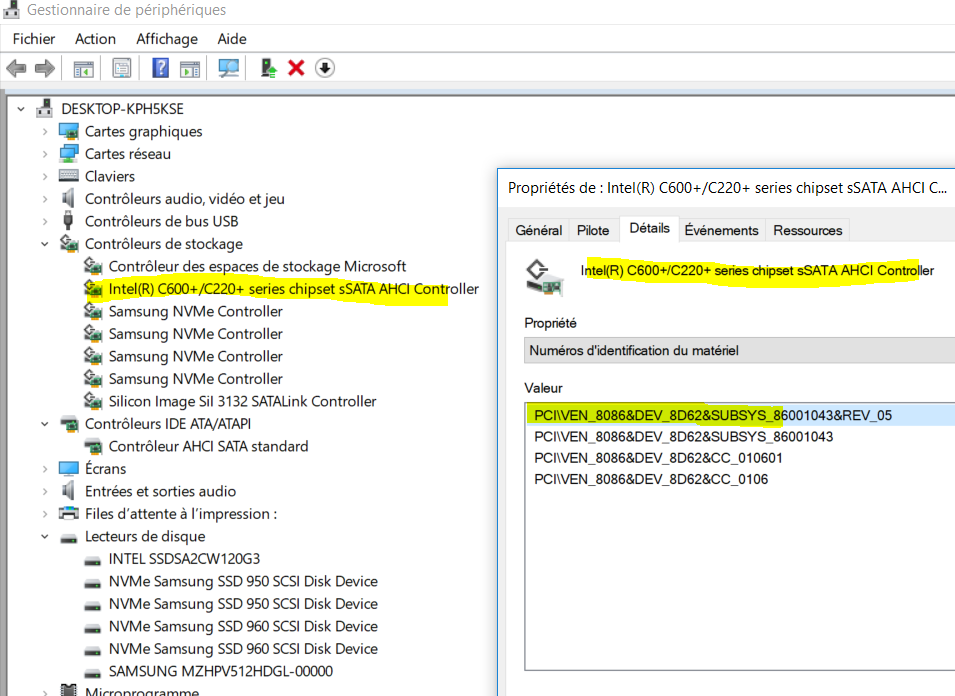 @100PIER : I’ve updated the opening post with Device IDs for each controller. I wasn’t sure about Device ID for SATA Controller 2 / IDE mode but I found it here - it is DEV_8D60.

@Lex ,
This confirm the Controllers 1 and 2 are like "chameleons".
There DEV IDs do change according the mode they are programmed (RAID, AHCI, IDE) !

There DEV IDs do change according the mode they are programmed (RAID, AHCI, IDE) !

This happens with all Intel SATA Controllers (not only the X99 Chipset ones).

Ok, so I have an Asus Sabertooth X99 system, and I seem to be having an issue with the 2nd set of SATA controllers. After a reinstallation of Win 10 x64 1709, I have the following controllers listed -

I am having issues with the drives on ports 7 thru 10. Accessing them basically freezes the system periodically. Never seen this before

Any assistance would be appreciated!

@DeathStalker : If nothing you have is RAID, then do not install whole software package - the only thing you need is drivers package (the smaller one, with only INF files) - unpack it in some folder. You need to install it by selecting specific device in device manager and use "have disk" option - then point to the folder you unpacked the drivers.

So which files exactly would I be using at this point?

This is the correct description of your computer and has nothing to do with the SATA mode of your on-board SATA Controllers. The word “AHCI” can only be found within the names of the Controllers, which are listed within the Device Manager sections “IDE ATA/ATAPI Controllers” or “Storage Controllers”.

So which files exactly would I be using at this point?
As of now, I just have the full package - intel_rst_14.10.0.1016(www.station-drivers.com)

You cannot use this RST Drivers & Software Set, because it doesn’t support your on-board Intel sSATA AHCI Controller.
This is what I recommend to do:

@Fernando
Here is a screenshoot of a large SATA and sSATA configuration.
I suspect a bug inside W10 Storage Device Panel Control detection for the 4 devices connected to the Controller2 sSATA. (plus NVMe PCie storage)
It does detect two 850 EVO 1TB and one 850 EVO 500GB SSDs devices.
Physically I have only ONE 850 EVO 1TB and 2 850 EVO 500GB devices !
BIOS and All other tools (HWinfo64, CDI, DCI, siv) does detect perfectly the presence of only one 850EVO 1TB and of the two 850EVO 500GB.
How can you explain a such W10 Panel Control bug ?

How can you explain a such W10 Panel Control bug ?

I cannot explain it, but I suspect, that it is just an intialization error while starting the computer.
This is what I recommend to try:
1. Run the Windows PowerShell as administrator, type “WinSAT diskformal” (without quotation marks) and hit the “Enter” key.
2. Reboot and run the Device Manager again.
Another option is to delete all Samsung 850 EVO entries, which are currently listed within the “Disk drives” section of the Device Manager, and then to reboot. This way the initialization of all connected Samsung 850 EVO SSDs will be restarted.

@Fernando ,
Thanks for the reply.
I have used the WinSAT command:

But the Bug is always present: 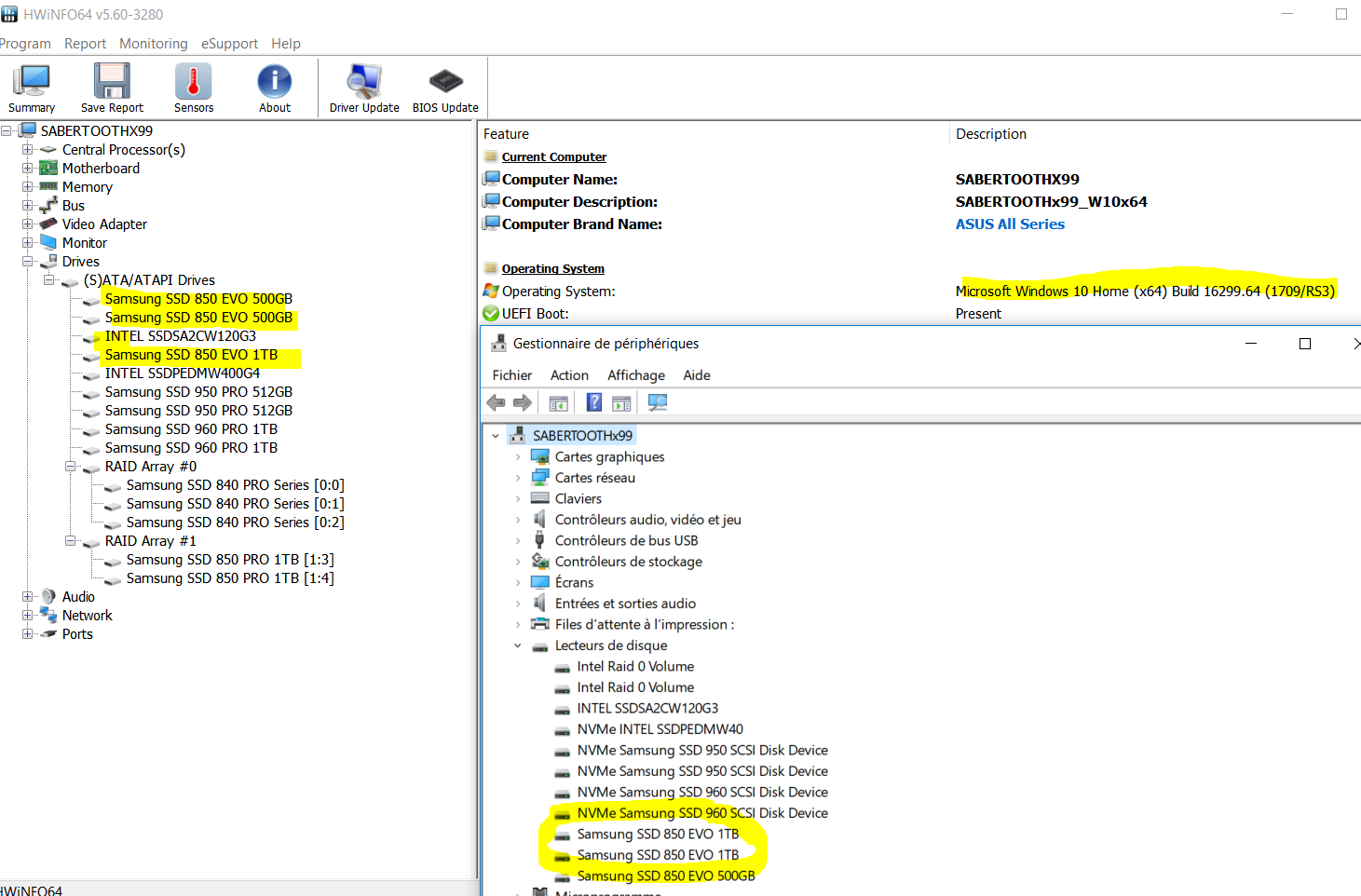 Thanks Ferando,
The 2 alternative tips offered under ‘Device Manager’ -> “Disk drives” I have tested are:
1) “deactivation” + Reboot PC : this does not fix the bug.
2) “uninstall” option + Reboot PC: It is OK !!!
Thanks again.