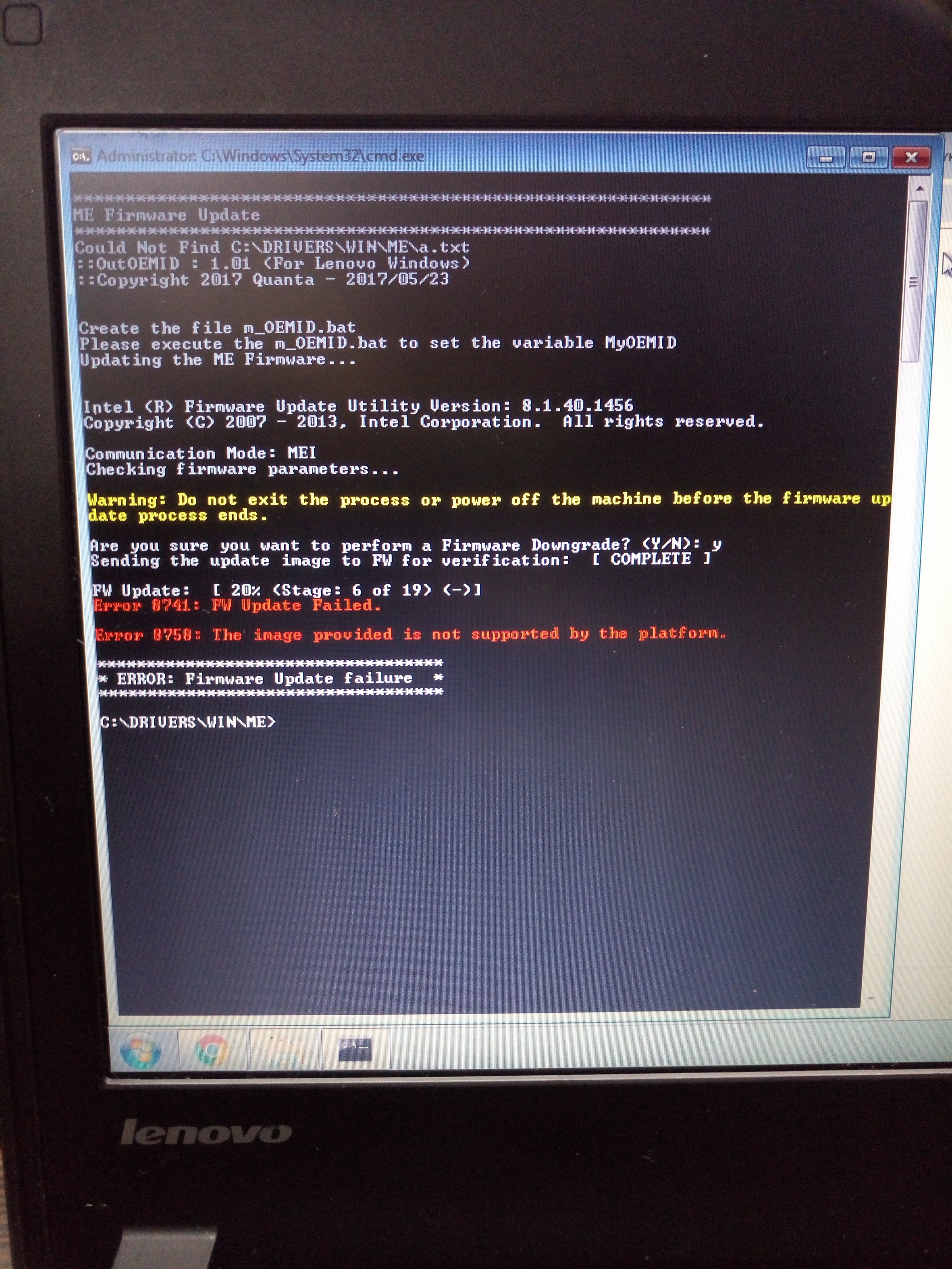 @Diep4 - Due to VCN you can only do this with flash programmer and properly configured older ME FW you want to use, or pinmod to unlock FD and then use FPT (but ME FW you use must be properly configured for your system first - either way)
You cannot simply use the ME FW files you download here without properly configuring them using this guide - [Guide] Clean Dumped Intel Engine (CS)ME/(CS)TXE Regions with Data Initialization
Unless you use ME FW update too, which is not possible for you to use in your desired downgrade due to VCN (Version Control Number, it’s a security thing, explained here in section “B” - Intel Management Engine: Drivers, Firmware & System Tools)

Since you have programmer, dump your current BIOS contents (if there is two chips, dump both), upload in a zip for me, and I will downgrade your ME FW for you. Let me know what version you want used

How about program MEInject, i can use this program?

Sometimes ME FW is bugged, or sometimes it may get corrpted during ME FW update. Could also be some BIOS bug too, since you updated BIOS right then as well
Can you see ME FW version in BIOS or with HWINFO64 (For that, on the large window on left side, expand motherboard and find ME area, inside that get the ME Firmware version.)
If you see 0.0.0.0 or N/A for version, or no ME FW in HWINFO, then it got corrupted.

-greset simply resets and restarts the ME FW state, and yes you can run that anytime you want (be ready for auto-reboot)

MEInject, I’ve not heard of and suggest against using, unless you want worse problems. I told you above the only ways you can fix this properly.
Since you have programmer, it is simple, dump BIOS, send to me and I will fix with the version you mentioned above if that is the one you want.

how to send BIOS to private message for you?

Upload to any file host you want (except Mega.nz, Dropbox, or box) and send me link

@Diep4 - Got the file, you can delete if you want now - Please answer my questions at post #4, AND tell me what ME FW version you want used (8.1.0.1265?), if not latest version.
Both should be fine, but I do suggest latest version, probably failed initially due to corrupted ME FW during flash or something like that
Please also link me to this systems stock BIOS from Lenovo, and link me to the 3367 BIOS page too if it’s different. If it’s same system, why are you bolding that 7?

Please also link me to this systems stock BIOS from Lenovo, and link me to the 3367 BIOS page too if it’s different. If it’s same system, why are you bolding that 7?

this information may be important:
After updating the ME - the laptop rebooted and did not turn on, there was a black screen and several beeps - maybe 4 or 5 pieces. I think they meant something.
I turned it off with a button, then turned it on. Booting OS, and I looked version of ME, has version 8.1.72.3002

Yes, thanks, I meant BIOS download pages/links. So, they are different systems?

ME FW you mention as current, and shown, is latest version. Where do you see that shown? Going to older may work, or may carry over bug from latest BIOS/ME.
ME FW version difference you mention is not large enough to one cause issue and other be OK, probably bugged ME you have currently due to what/how you did that.
What older BIOS were you using previously, when it was OK, so I can use it’s ME FW as settings base for the transfer.
And to clarify, which is your current model w/ issue, 3368?

So, you removed chip and programmed in something to the BIOS chip? What did you program, BIOS as whole, or ME Only, and where did you get it? And, if you programmed BIOS as a whole, was that dumped BIOS from chip, or stock BIOS from Lenovo?
This is probably the issue, not the ME FW itself, you probably programmed in stock ME FW without settings, or something was wrong with your write process etc
Did you use the ME FW clean/settings transfer guide from this forum? If not, how did you “Clean” the ME? Do you have dump of chip with programmer, before you did any write/erase?

only removed the chip from 3368, reading this chip, then send to you, nothing program, did nothing.
Now this chip is separate from the motherboard and weit new, clear ME.
my laptop have machine type 3368.

Both of the linked systems use exact same BIOS, and same BIOS download URL https://download.lenovo.com/pccbbs/mobiles/g8uj35us.exe
So they cannot have different ME FW versions, that would only happen if you update ME FW outside of the BIOS update with ME FW update tool or other methods.
That BIOS contains 8.1.0.1265 as you mentioned.

Sounds like you messed up the ME FW update on 3368 when you updated it. You said you updated the ME FW, I was asking how exactly you did that, and with what files etc.
I only asked this to be able to tell you reason why it’s messed up, because latest ME FW version 8.1.72.3002 is not the issue, the problem is how you applied that ME FW Update most likely.
So, before I do anything, please explain exactly, what all steps and with what file, how did you update the ME FW to 8.1.72.3002 that caused this issue?

ME FW downgrade is not required here, and I actually suggest you update both systems to 8.1.72.3002, but it has to be done properly or you will have problems like you do now

I now understand you.
You can’t understand where I got the ME update or how I updated it. Yes? - OK.
the first line of my first post #1:

I am update Intel ME on the laptop Lenovo x131e(BIOS version is 3.01) from the official web site Lenovo

Yes, I understood you did what you mentioned above, and I already knew that was there on their site. I asked, how exactly you applied the update, this is where/how the issue happened, depending on how you applied that update/ME FW files
Did you run the exe provided by them, or did you take the ME FW from there and install it in some other way (ie manually, with some tool like FPT, or with hardware programmer etc)
If you used FPT or hardware programmer and that stock ME FW file, without dumping your BIOS and using that as the ME FW settings source and followed the cleanup guide that way, then this is the issue because that file is unconfigured stock (ie has no settings specific for your system)

Proper method to update ME FW for all these systems would be to use ME FW update tool and the latest Intel ME FW >> FWUpdLcl.exe -f filename.bin
But, you need to be sure which ME FW 1.5MB (8.1.70.1590) or 5MB (8.1.72.3002) each system uses, the stock download from 3368 page is 5MB 8.1.72.3002 version
Both systems may use same one, or maybe not, this does not depend on BIOS, you can only tell by checking each system ME or full BIOS dump then check ME FW with ME Analyzer
That only works if you are upgrading and ME FW is healthy, in order to downgrade, it’s only possible if/when you follow the SVN/VCN rules.
This also will not work if you previously flashed in stock ME FW without settings for your system, ie ME FW is now/currently incorrectly applied / thus no settings for your system (Since update would apply those same missing no-system settings)

I used the instructions from the official website of Lenovo, file name README for Intel Management Engine 8.1 Firmware.txt, link
https://us.download.lenovo.com/pccbbs/mobiles/h4mg02ww.txt
applied this command in CMD.exe:
C:\DRIVERS\WIN\ME\MEUpdate.cmd

OK, thanks, updating that way "Should’ have been OK, but maybe some glitch happened. I would do exact same now, on both systems. But, that will only work on system with healthy not corrupted ME FW (ie shows version, not 0.0.0.0 or N/A)

Send me your dumped with programmer BIOS from 3368 system, I will make it the ME FW version you want, then you program it back.
If it fails still, then there is some setting/bug carried over during the ME Settings transfer/downgrade, and we’ll have to find dump from this exact 3368 system, which will be a MAJOR pain, since both use same BIOS but may have very different ME configurations.
Before that, we can test ME directly swapped from working 3367 dump too, you can dump it with FPT, send to me, I’ll recompile with your 3368 BIOS then you program it back

To dump configured ME FW from 3367, download the v8 ME System tools from section C.2 this thread, then do as outlined below (or, you can dump it’s chip with programmer if you want)
Intel Management Engine: Drivers, Firmware & System Tools

Once downloaded, inside you will find Flash Programming Tool folder, and inside that a Windows or Win/Win32 folder.
Select that Win folder, hold shift and press right click, choose open command window here (Not power shell).
At the command prompt type the following command and send me the created file >> FPTw.exe -me -d me.bin

If you are stuck on Win10 and cannot easily get command prompt, and method I mentioned above does not work for you, here is some links that should help
Or, copy all contents from the Flash Programming Tool \ DOS folder to the root of a USB Bootable disk and do the dump from DOS (FPT.exe -bios -d biosreg.bin)
https://www.windowscentral.com/how-add-c…creators-update
https://www.windowscentral.com/add-open-…menu-windows-10
https://www.laptopmag.com/articles/open-…ator-privileges

Or here is simply registry edit that adds “Open command window here as Administrator” to the right click menu
Double-click to install, reboot after install may be required
http://s000.tinyupload.com/index.php?fil…134606820377175

You can give me clear ME?

No, I can do as I mentioned above. Update (Downgrade ME version to what you think you need) and transfer ME Settings for you. But before that, I will give you BIOS to try with the direct ME FW swap as I mentioned above.
Clear ME is a generic term that should not be used by anyway, it could mean any number of things to different people.

No, you are confusing what I meant. Please do as mentioned in post #16. Send me programmer dump of 3367 and 3368 if that is easier for you
Yes, you cannot downgrade ME using ME FW update tool, only FPT if FD unlocked, or by programmer (by either unlock FD first and program in, or just program in BIOS with FD unlocked and ME how you want it).