Good evening, i need your help. I have a laptop MSi Dragon 2 edition with H87M Chipset. I would like to know what drivers and what firmare is the best for it.
Till i know it is serie 8 and the best would be firmare 9.5, but I´m not sure because it now has 9.0 firmware versión, and i have read versión 9.0 is only recomended update to 9.0 x versions.
I have take a pick with meinfo to can give more information
Thanks a lot for your support Thank a lot Plutomatic, i have not update my BIOS because it give me some problems with some states relatives to saving energy.In the past i updated bu after i back to my actual BIOS because i think is the best for now for me. Inclusive i updated to BIOS from january in this year and this gave me the same problems. I would like to update my MEI Firmware to check if this can be fixed, relatives to saving energy with new BIOS. Please could you tell me if it is posible to update ME Firmware without update BIOS previously?.If it is not and i have to update my BIOS firstly, which is the best firmware for my laptop? thanks a lot for your help and clarify my idea aout the firmware, thanks a lot


NOTE: I have updated with the last bios again but i have checked i follow with the problems. If i boot the laptop with usb mouse connected the laptop doesn´t boot, freezed in MSi screen besides after start the Windows and connect the usb mouse with Windows started, the laptop doesn´t enter in suspensión mode.With the old BIOS all is ok.
I have this question now, what is the best firmware for my latop, this : Intel ME9.0 Business 5MB Firmware v9.0.31.1487 or this Intel ME9.0 Consumer 1.5MB Firmware v9.0.31.1487? wich is the difference?
Till i understand my chipset is HM87 with the chipset is serie 8 and my MEI firmware is 9.0, besides i have 9.5 MEI Drivers installed

There seem to be 2 different kind of BIOS images for your laptop the “5” or the “7” versions. Are you sure you updated to the correct one when you first tried a BIOS update? Maybe that’s causing your power issues. If you didn’t mix and max the 5,7 versions then as I can see your current BIOS is the “5” variant. The latest BIOS for that is E1763IMS.518. However, according to MSI you need to first update to E1763IMS.50V and then to the latest E1763IMS.518. 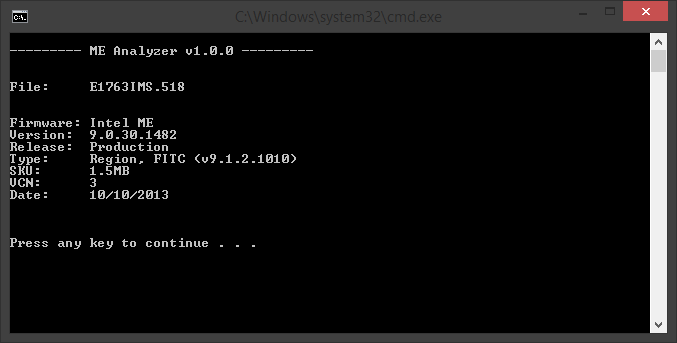 If you are having such issues maybe you did not apply the correct BIOS variant (did you have “7” initially but applied the “5” image?). Otherwise, you need to contact MSI for your problem. They should be able to help you. BIOS releases are supposed to be stable, this is not normal.

EDIT 2: Your power problems may have to do with old EC. Have you updated that to the latest version as shown at the MSI support page for your laptop?

By the way: Before updating the ME, can you do me a small favor and run FWUpdLcl64.exe -save ME.bin ? A small (~940KB) file will be created called ME.bin, can you attach this here? It’s for me since I require an update image of a 9.0 ME for some testing irrelevant to this problem.

Thanks a lot Plutomatic for your help again, you are fantastic people.I explain you.
Versions "5" is for AHCI and "7" versions is for RAId system and i don´t have RAID, so my bios is 5 versión. Updating the BIOS the Firmware versión doesn´t change.
I flashed all BIOS that MSI made after E1763IMS.50V and with all gave me the same problems. I wrote in MSI oficial forums but they never gave me a solution, i contacted with spanish offcial MSI support and they told if my laptop works fine is not neccesary to update and is better not update.
I already have updated the EC firmware and EC is not the problem. I have checked with various versión EC firmware and 50V BIOS and works fine, but in the moment i update the BIOS to newer tan 50V the problems appear with EC different versions, so i´m very sure the problema is BIOS.
I already backup my BIOS some time ago, now i upload for you , not problema, but the size is ~ 1,2MB and at final contains "H" letter i don´t know why
Note: i have had to zip the file because the system not leave me to upload as bin

Plutomatic as you can check after update BIOS the ME Firmware not update to the versión you has showed in the pic
BIOS is 518 and ME Firmware is 9.0.1.1333 H Plutomatic as you can check after update BIOS the ME Firmware not update to the versión you has showed in the picBIOS is 518 and ME Firmware is 9.0.1.1333 H

First of all thank you for the UPD image you provided above.

I didn’t know about AHCI and RAID versions and even though it is said at the BIOS changelog I didn’t notice. Anyway, the latest BIOS seems to only address a “Hidden network stack item in legacy mode” according to MSI so it’s not really a big update. If the older BIOS does not cause problems for you I suggest you revert and use that. What the problem is, it’s MSI that should figure out and fix. It’s unacceptable for them to not care.

Regarding the ME: The SPI flash image (the 8MB “BIOS” image as we tend to call it) consists of 5 regions: Flash Descriptor, ME, Gbe, BIOS & PDR. Your system has Flash Descriptor, ME & BIOS. The flash descriptor has a Lock that does not allow modification or update (basically write access) of the ME firmware. It’s there for security reasons. In order for the SPI flash image to update the ME region firmware it needs to temporarily disable that lock/protection of the flash descriptor. Most OEMs have a system in place (either with a jumper or by using the BIOS software message “HMRFPO”) that disables that lock and updates the ME firmware. If this is not unlocked, the BIOS is updated but the ME firmware stays the same. This is what happens here, the BIOS (SPI flash) image has a newer ME firmware inside but it cannot update it because MSI has not implemented a system to temporarily unlock the flash descriptor and allow ME write access.

However, the tool FWUpdate (FWUpdLcl.exe) does not require an unlocked flash descriptor to update the ME firmware. It’s only updating it and not replacing it all together. So, if you download the latest v9.0.31.1487 firmware and FWUpdate tool you can update your ME firmware to the latest version to date. So do that and restart. You should be running the latest ME firmware now.

Afterwards, uninstall your current ME driver from Control Panel > Programs and manually install the latest ME driver using the Have Disk Method (via Device Manager) which is v10.0.30.1054. Yes, the driver is fully compatible.

Let me know how everything goes.

EDIT: Oh, the H shown at MEInfo or the dumped UPD image you gave me, means Haswell. Nothing to worry about.

OH Plutomatic you are impressed me you are very very good technic and people, i´m very gratifull to you

How could i update new driver (10.0.30.1054) manually without installer? what i have to search in my devices management system to can update manually ?

Edit:
I have just to update ME Firmware and back to my old BIOs wich woks fine and i have the last, now i will search how to update my drivers manually to 10.0 versión, thanks for your help How could i update new driver (10.0.30.1054) manually without installer? what i have to search in my devices management system to can update manually ?

First visit my ME Thread, go to section A1 and download “Intel MEI Drivers v10.0.30.1054 for manual Have Disk installation”.

After uninstalling the previous ME software from Control Panel, go to Device Manager > System Devices > Intel Management Engine Interface. Right click > Update Driver Software… > Browse my computer for driver software and select the folder with 10.0.30.1054 driver you downloaded from my ME thread. This should update the driver to the latest v10.0.30.1054 version. 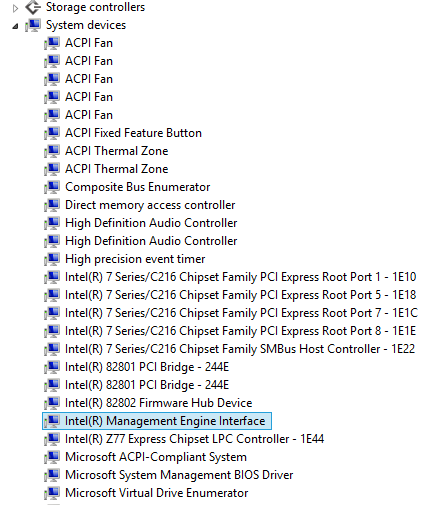 Now all is updated thanks to you, excellent help plutomatic thanks a lot again
My first impression is the usb 3.0 ports works better, faster and stable, i will check to can sure of this but before heavy archives give me some problems, i had constinuosly problems , hard disk coonected to usb were disconnecting randomly too
CONFIRMED: USB 3.0 ports works fantastic now too You did not uninstall the previous drivers though otherwise LMS would not be showing 9.5.10.1628. For 1.5MB systems the full software is not really needed either way.

Also don’t forget to run MEManuf to test functionality of the ME.

ME has nothing to do with USB so if you have such issues they won’t be fixed that way. It’s probably older USB drivers or firmware. But that’s off-topic.

Ok plutomatic, i have read a lot of problems with usb 3.0 ports and i a lot of users have instaled Windows 7 drivers versión to solve an d fix the problema.perhaps upating my drivers the problema was fixed, but i sure you my ports work perfectly now, and before they were a nightmare.The speed has uploaded inclusive, i have this laptop one year ago and i known it, i bought new and i see the difference between before and now.Thanks plutomatic you have solve my problems and i´m grateful to you

Plutomatic test passed ok. Now i´m trying to update LMS Driver to v10 you posted but i don´t find in the system management, please could you tell me where it can be? You won’t find it there, these are background services which are installed with the full package. For your 1.5MB system, only the ME driver is really needed. You are set as far as ME is concerned, nothing more to do.

yes i have found here C:\Program Files (x86)\Intel\Intel(R) Management Engine Components\LMS exe but this is a executable and i can´t update drivers, i must to update the exe too as you tell with full package installer. Thanks again Plutomaniac

Hi again plutomatic, excuse and allow me abuse your wisdom and knowledge. I have found a new Intel management installer versión 10 for H87 series, but this is for desktop versión, please could you tell me if it is valid for my latop, please?

I read in the below description it is valid for 9.0 firmware and fot taht i have thought perhas can be valid for my laptop.

the links are these:

ok, thanks plutomaniac, the i left my system so for the moment, a sincerely greeting

Plutomaniac you are on truth, the usb 3.0 problems continues. Do you know how i could to opdate the firmware for usb 3.0 ? i have been searching about this and i have read tons of problems about this.
My problema is with Intel® USB 3.0 eXtensible Host Controller Driver for Intel® 8/9 Series and C220/C610 Chipset Family.Connectings and disconnectings continuously, where i can ask in this fórum about this? waht is the correct section? greetings

Which OS are you running and which driver is the on-board Intel USB 3.0 eXtensible Host Controller currently using?
Note: