Hello. I have a Fujitsu Siemens Esprimo P720 E90 + MI5W with the latest UEFI BIOS 4.6.5.4 R1.47.0, dated 08/26/2019.
I have mounted a Samsung NVME M.2 SSD harddisk to a PCI-E x4 adapter, and this to a PCI-E x16 slot.
I have configured all the BIOS entries I could in UEFI mode, especially those related to CSM, but the BIOS does not recognize the NVME harddisk.
There is no NVME settable entry in the BIOS, but only AHCI or IDE.
The installation procedure of the operating system, Windows 10 Home 64, recognizes the harddisk, copies the files to it, but upon restart the system does not recognize it as a bootable drive.
Is it possible to modify the BIOS?
I enclose the updated BIOS.
Thanks in advance for what you can do.

I am attaching the screenshot of Cpuz. 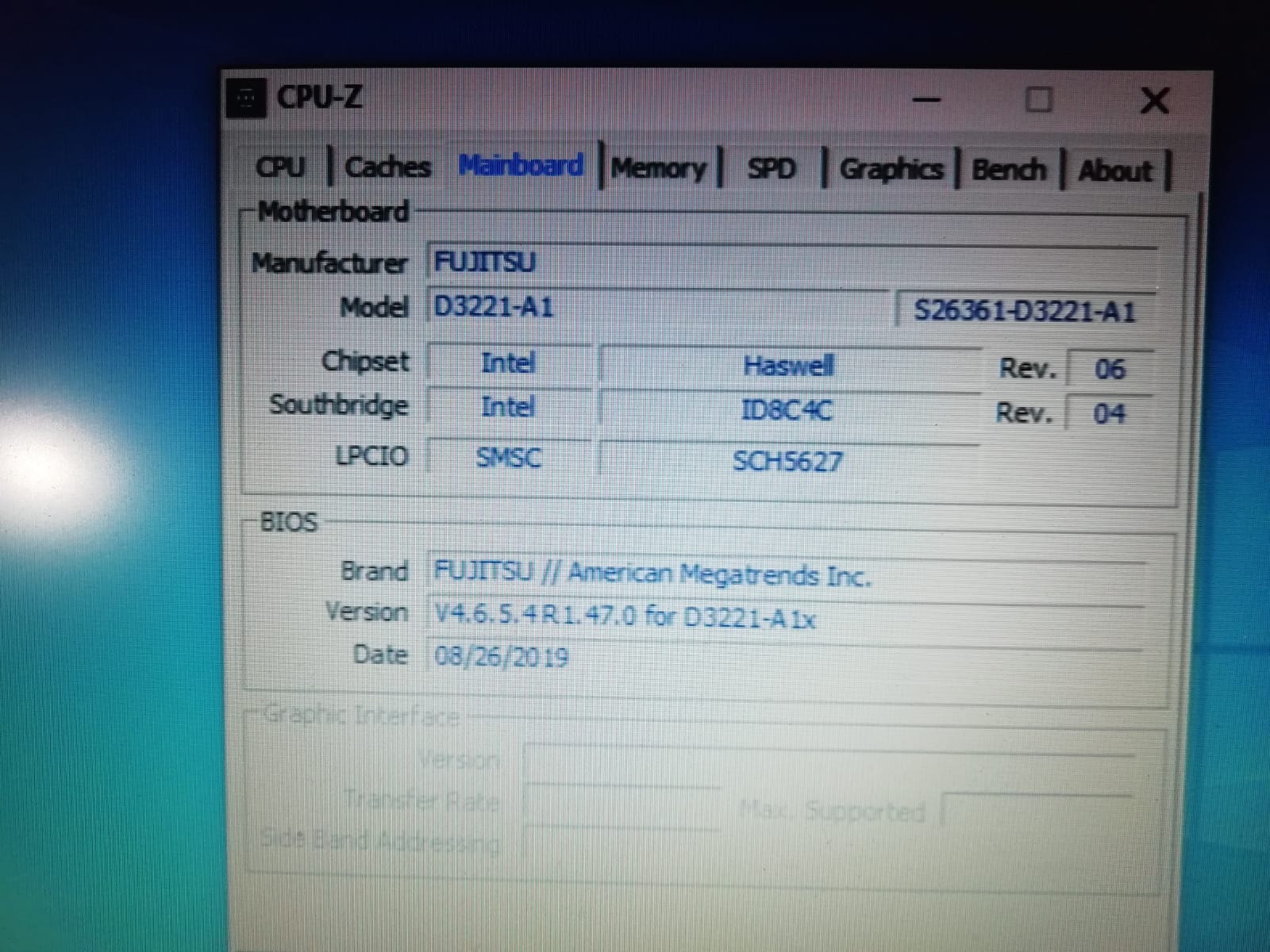 Why dont u start here:

Keep in mind that this operation is ALWAYS of great risk to ur system, specially with bios from OEMs like urs, HP, DELL etc…and not always possible to mod.
It always advisable to acquire a SPI programmer and identifying the correct chipset, bios version, modules, spi module, etc…
Backing up ir SPI bios image by software or programmer is a MUST.

Read similar post from users with similar hw models and ull get a picture of it…gl.

First of all thanks for your kind reply.
I followed the MMTools guide, I opened the bios, I looked for the "CSMCORE" module, I loaded the small NVME module, but the program returns an "Invalid Volume Index" message, as you can see from the attached file. 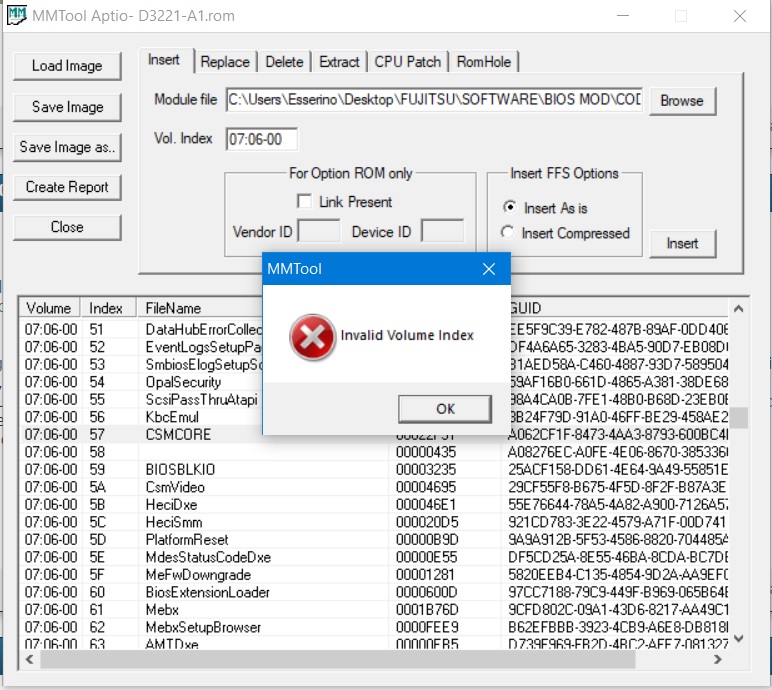 Ur using a dumped image from ur system, not from FSC update file, right?

As i told u…not always successful and and even less in OEM systems, u can try UEFI method
Do NOT do any attempt to flash if ur not sure of the results observed done by UEFI tool.

if the mod is possible try make a [REQUEST] post, to ur mod in the appropriate BIOS MOD NVME section, since more experienced users exist here the forum.

I’m working on the latest version of the SFC BIOS, indicated in the first post, downloaded from the appropriate Fujitsu page.
Of course, I also tried to use the UEFITool, but once the BIOS has been edited it appears to have many “pad” files, while I read in the guide that it must not have any. It also has no “BIOS region”.
But it has a CSMCORE module.
Can I go ahead with this method or should I stop? 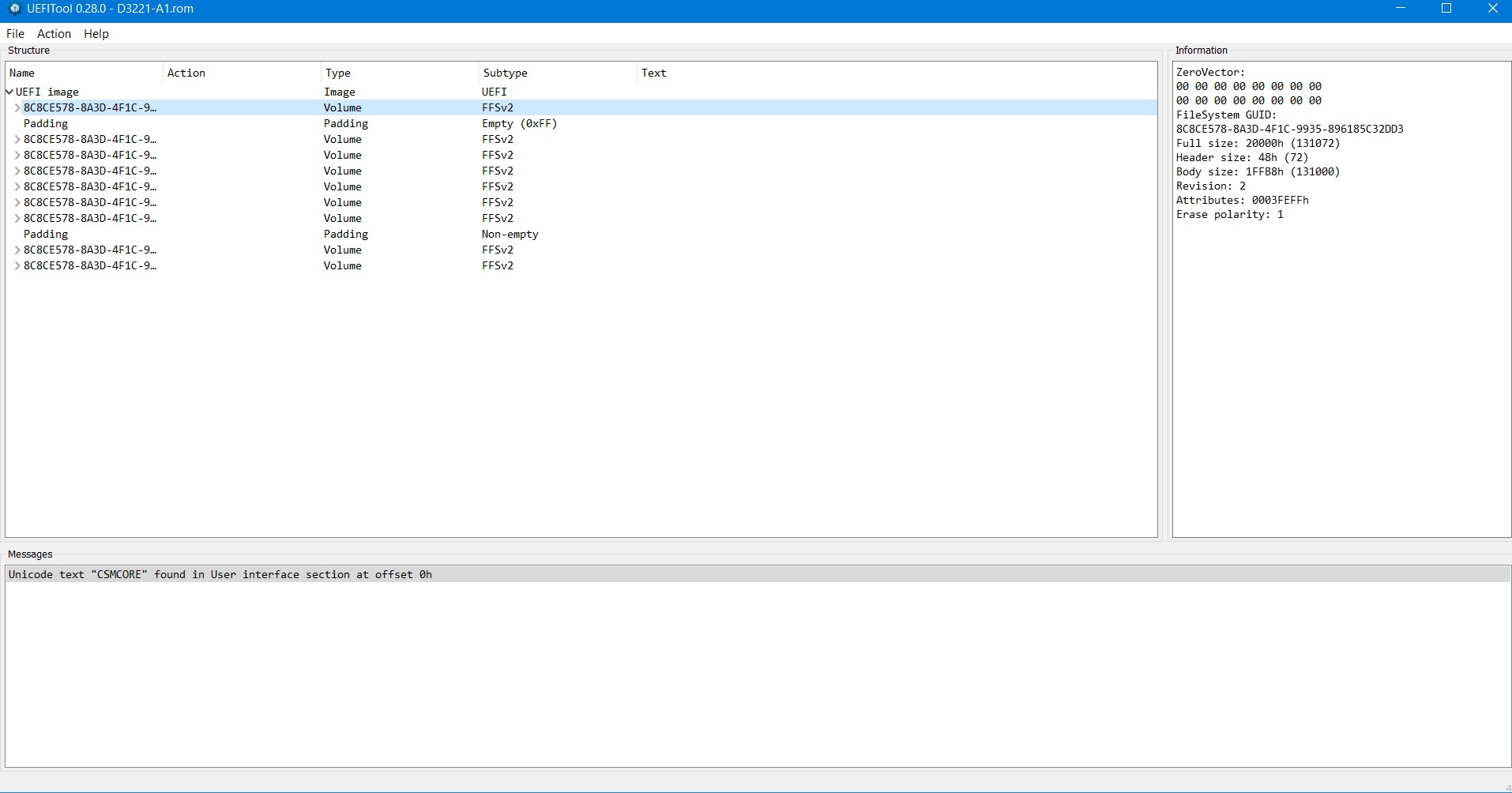 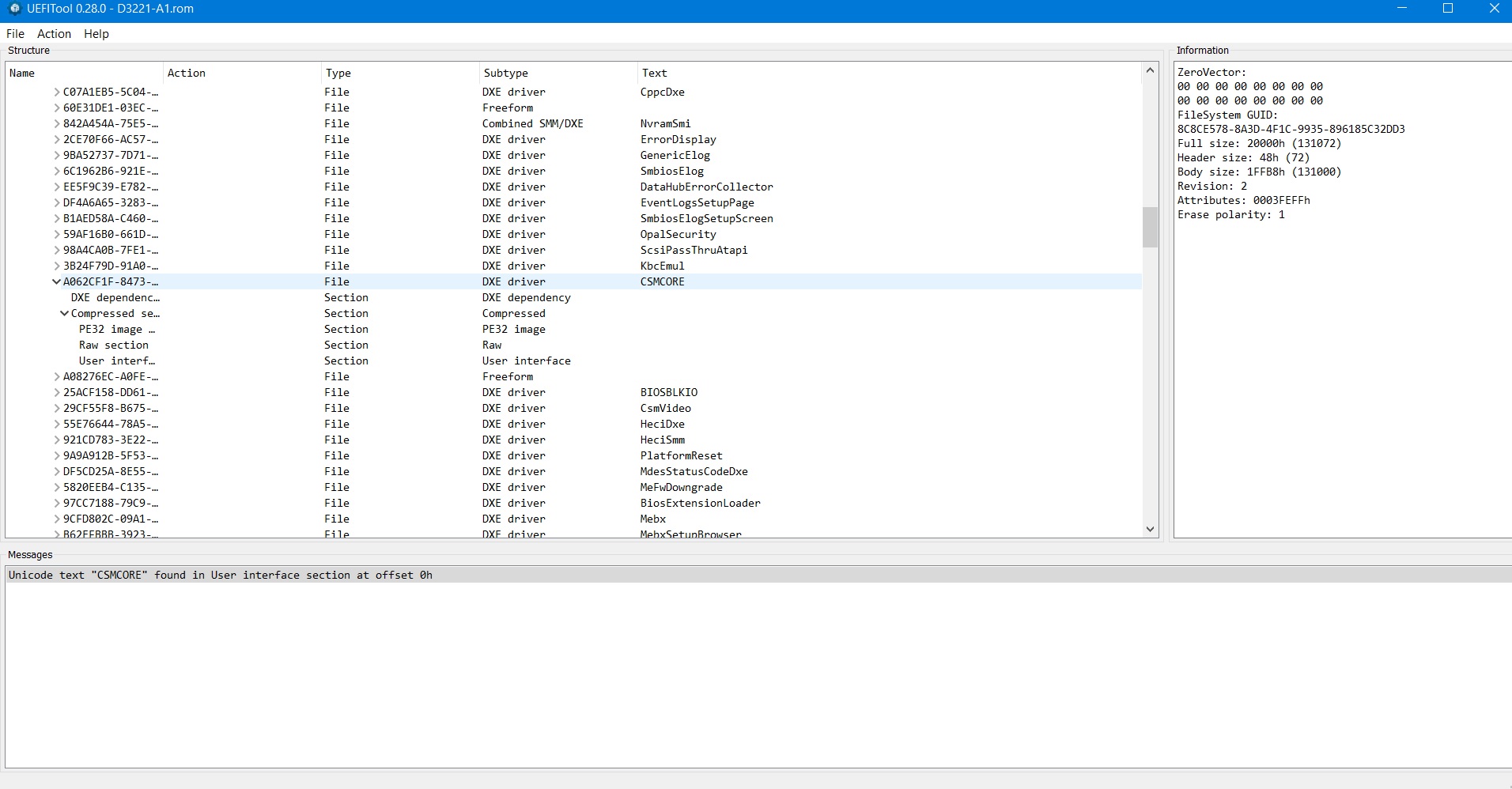 No, u cannot use that file, its an update file not a full SPI image, thats why ull have to use a dump of ur current system already in use of the mentioned version and try to mod the Bios region as showed here without UEFI capsule

Indeed MMTool method is not working with both NVMe ffs files, as i get same errors as u did, but i suspect the lack of space in the volume since i did inserted successfully a ffs module under 5kb, not bigger.

It is advisable to edit the dump instead of OEM files due to the risk of losing serial, mac address etc…

This kind of files/spi images from OEMs r too risky to mod and being successful.

As i advised before u should put a request on this mod, forum gurus will have more experience/better views on my opinion to ur case.

Ok, I’ll turn the question to another section of the forum. Thanks for your assistance!

Hi, I have a Fujitsu Siemens Esprimo P720 E90 + MI5W with the latest UEFI Aptio 4.6.5.4 R1.47.0 BIOS, dated 08/26/2019.
I mounted a Samsung NVME M.2 SSD harddisk on a PCI-E x4 adapter, and this on a PCI-E x16 slot.
I configured as many BIOS entries as I could in UEFI mode, especially those related to CSM, but the BIOS does not recognize the NVME hard drive.
There is no NVME settable entry in the BIOS, only AHCI or IDE.
I have already downloaded the modules related to the NVME features that I could use, a compressed or an extended one, and I would like to know if there is a tool to dump the UEFI BIOS image possibly only via software, because the motherboard does not seem to have SPI sockets and I don’t have, nor know how to use, an SPI programmer, after which I would use UEFITOOL to insert it.
Or, if a physical tool is needed, I ask you if you can kindly change the BIOS yourself.
I remain at your disposal in case you need photos or further information.
Thanks in advance for the help you can give me.

@Rothwang Problem here is most probably not modding the bios but getting it into the machine.

Inserting NVME module can be done with UEFItool 0.25. No additional padding files, but free space at the end of the volume is a little smaller, so S3restore, Video Orom, Boot Agent and something unidentifiable aren’t changed, but moved a little backwards. Possibly this won’t matter, but… 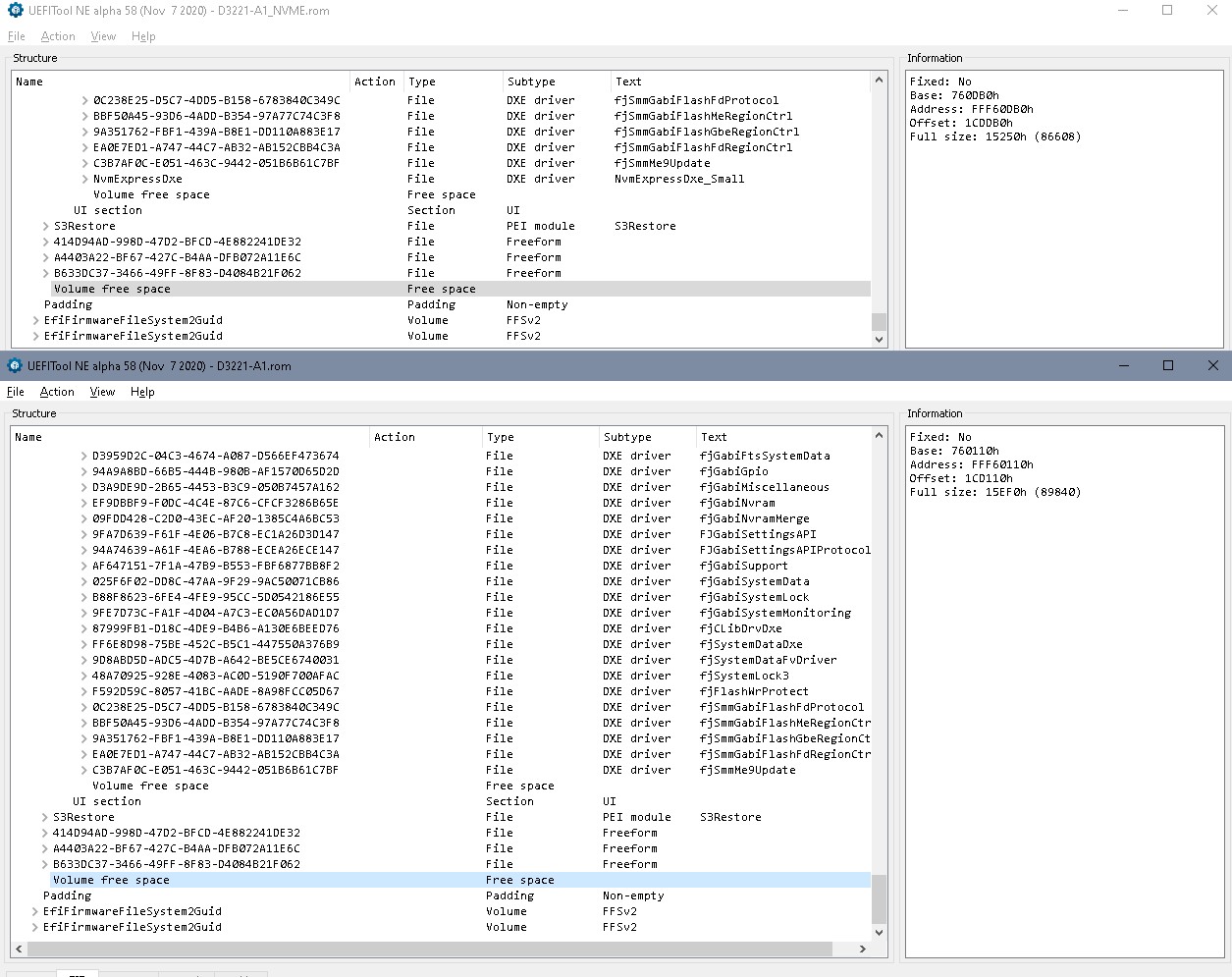 To avoid this one could delete an ununsed module in FV_MAIN_NESTED, but this isn’t completely without risk, too. @Fernando would know best.


Next thing is to get the modded bios into the PC. Since Fujitsu update procedure isn’t (completely) known here most safe way would be with a programmer. Backup the original bios chip completely, mod a copy of your own backup/ dump so that board specific information isn’t lost and reprogram with modded bios.
This way you’ll have the security of a full valid backup and the possibility to restore your old bios in case modded bios is a brick. CH341 programmers are rather cheap, you’d have just to find the bios chip on your board and find out if it’s socketed or if you need a soic8 clip…

Since at least in the update files the FD is unlocked you could download Intel ME System Tools v9.1 from Intel Management Engine: Drivers, Firmware & System Tools
and try:
“FPT***.exe -i” => Post the complete output

As lfb6 reminded u…its a risky operation, u should considere a cheap CH programmer

@Rothwang - The programmer they mentioned is cheap, you need CH341A + SCOI8 / SOP8 test clip with cable.
And we have guide with lots of images to show you how to use it - [GUIDE] Flash BIOS with CH341A programmer
That may or may not be required to flash mod BIOS, but it is certainly suggested to have, to make a backup first before you do anything, that way in case it bricks you can recover easily.

Thanks very much to MeatWar, lfb6 and Lost_N_BIOS!
Following your advice, I decided as a precaution to purchase the entire CH341A + SCOI8 / SOP8 test clip with cable kit. Do you have to recommend a particular store and a particular model of these devices, or can I buy them at random on Ebay? 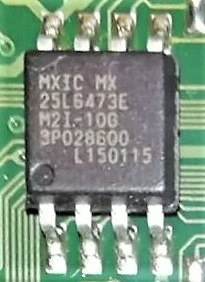 Normal 3V chip, should work with asprogrammer 1.4x for example

PLease remember to run these commands (*** according to DOS/WIN/WIN64/EFI version):

Those commands do just ‘read’, you can’t destroy something by running them.

Ok thak you. But which kind of CH341A SOIC8 SOP8 test clip with cable kit should I buy ? Do you have to recommend a particular store and a particular model of these devices, or can I buy them at random on Ebay?

… Those are low quailty items, so there might be always one in betweeen that’s not OK. I bought one that got warm, didn’t write first tries but afterwards worked perfectly fine. There’s always some extra attention with being 100% sure that you read/ wrote what you intended to.

(If you need a soic 8 clip or a 1.8V adaptor depends on your hardware/ plans for the future…)

In my opinion it’s all the same cheap stuff. Normally I like to buy things which can still be repaired after 20 years in a good shop which might be a more expensive, too- but for those programmers that’s not meaningful unfortunately. ‘Better’/ more expensive shop would possibly mean less discuccion if it doesn’t work, but item is probably identical… => I’d rather buy 2 or 3 of the cheapest sets to have some redundancy… Shipped by am… might give you more reliable delivery date, though.

Hi lfb6, I just bought the KeeYees model you recommended.

Hi everyone. As you can see from the photos I bought the device you recommended, KeeYees SOP8 SOIC8 Test Clip, and I backed up the bios with the program downloaded from the manufacturer’s website, CH341A Programmer v1.34: 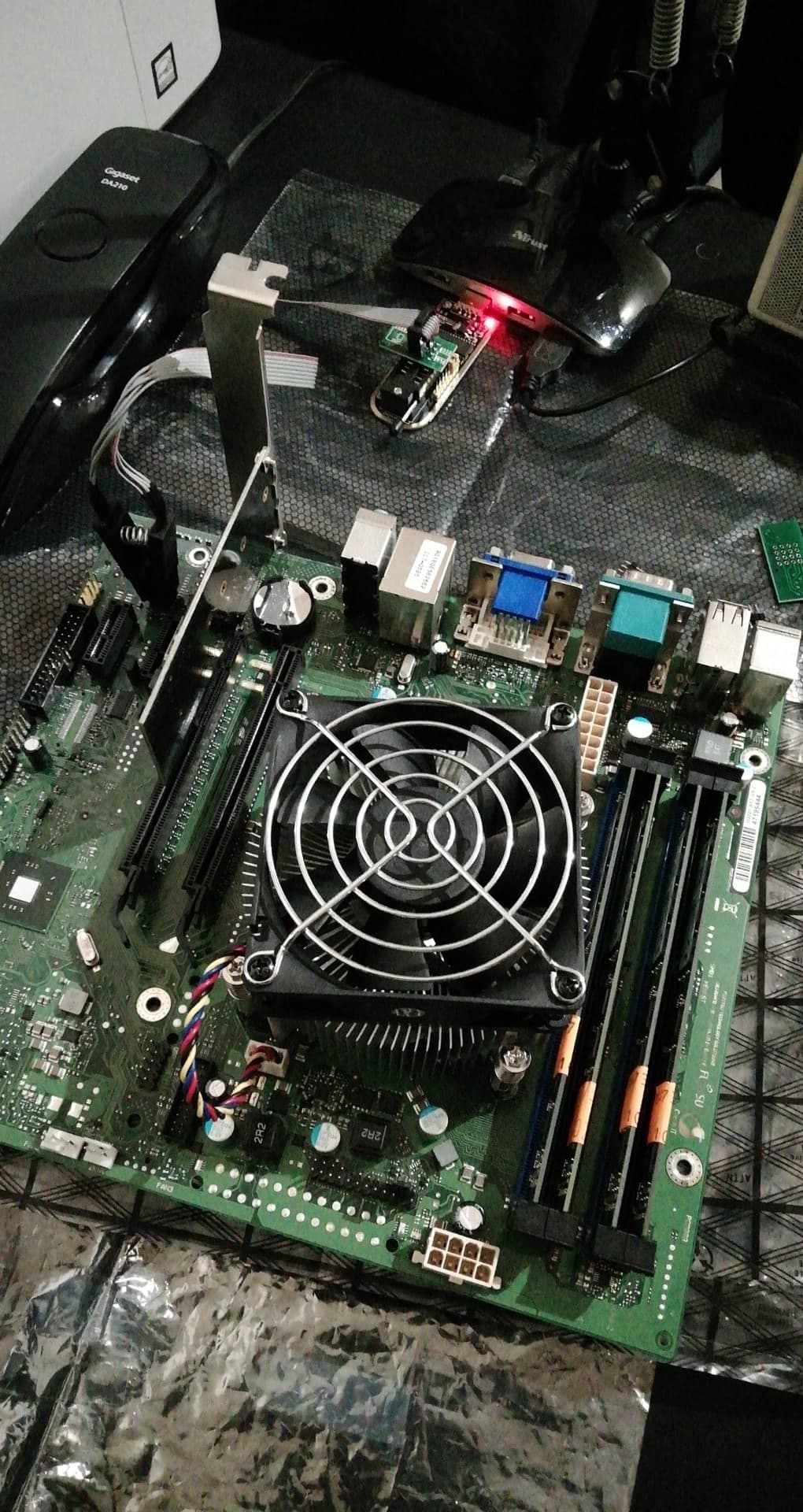 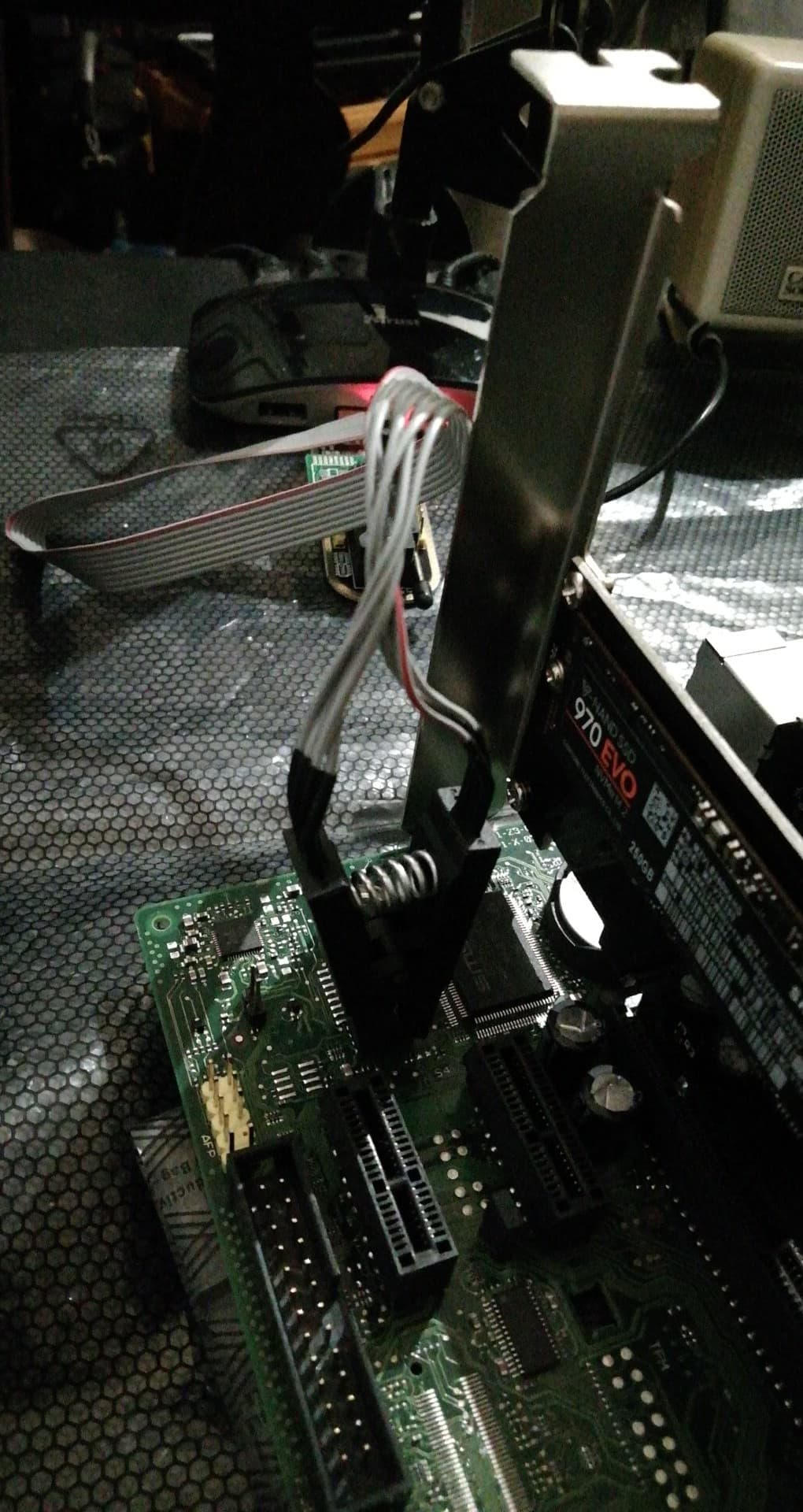 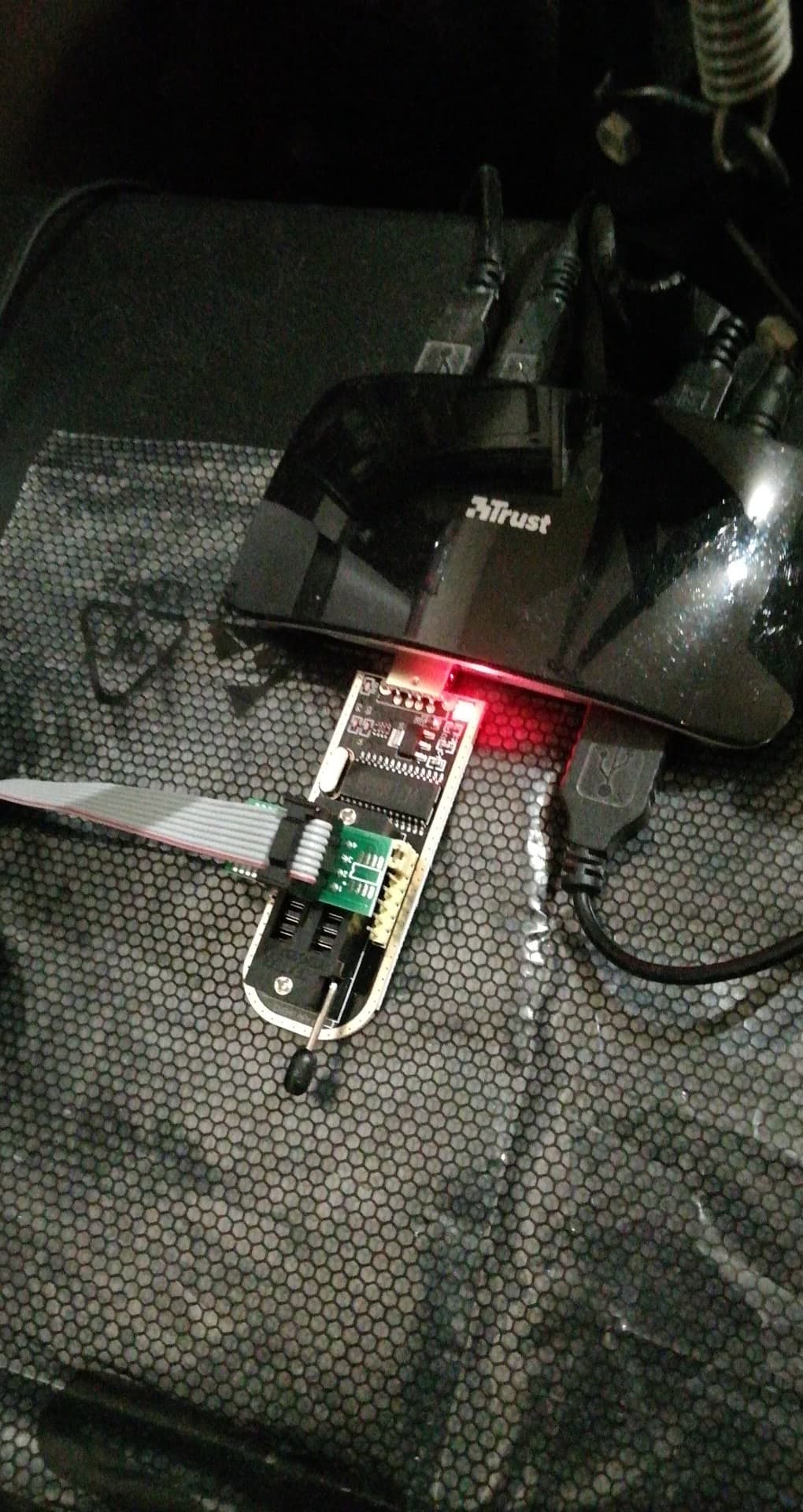 then I tried with MMTool 4.50.0.23 to insert an NVME module, first the extended one and then the reduced one, but the program made me the same error messages as when I tried to modify the original Fujitsu bios.

So I tried again with UEFITool 0.28.0, following your guide: 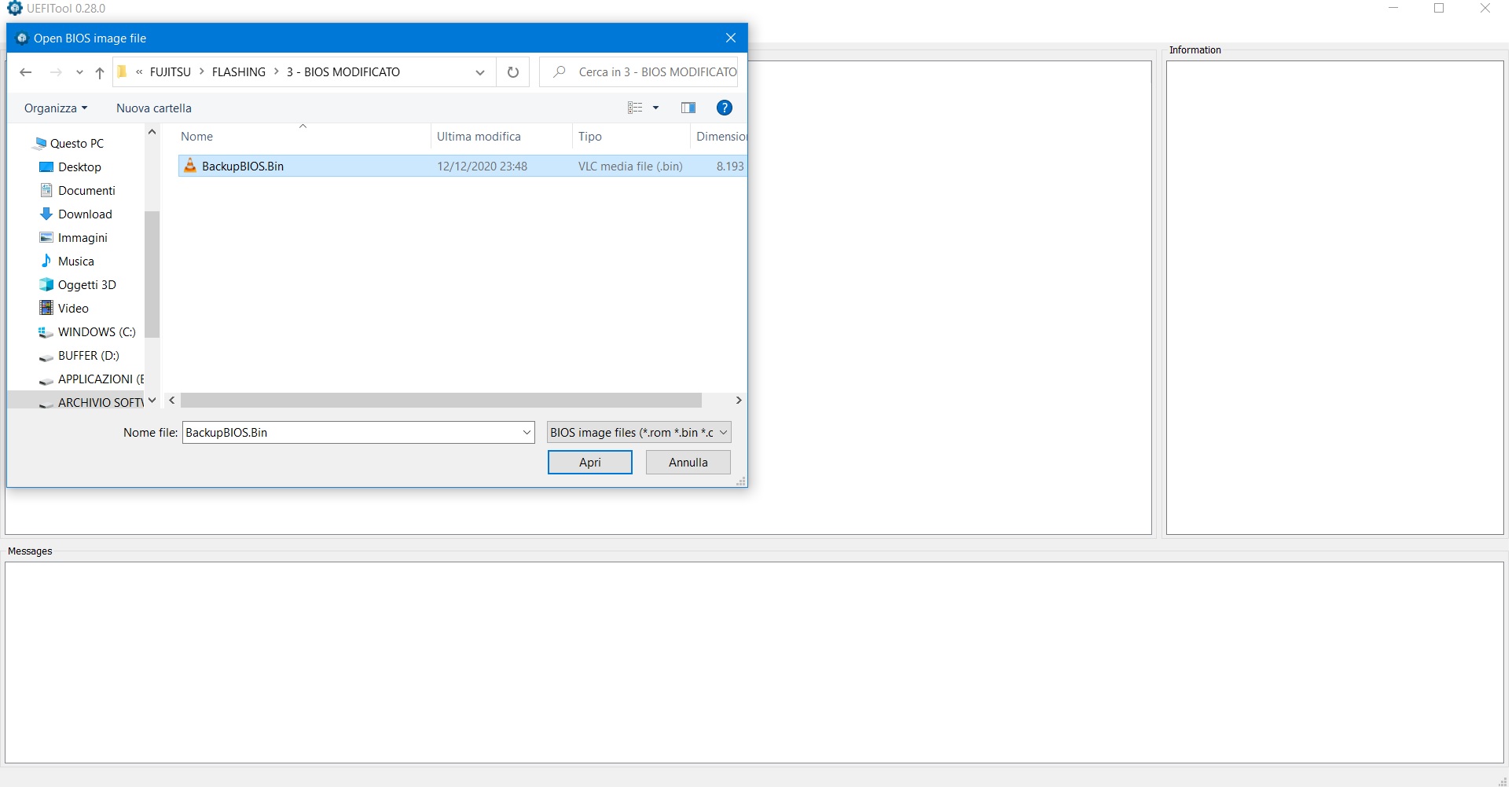 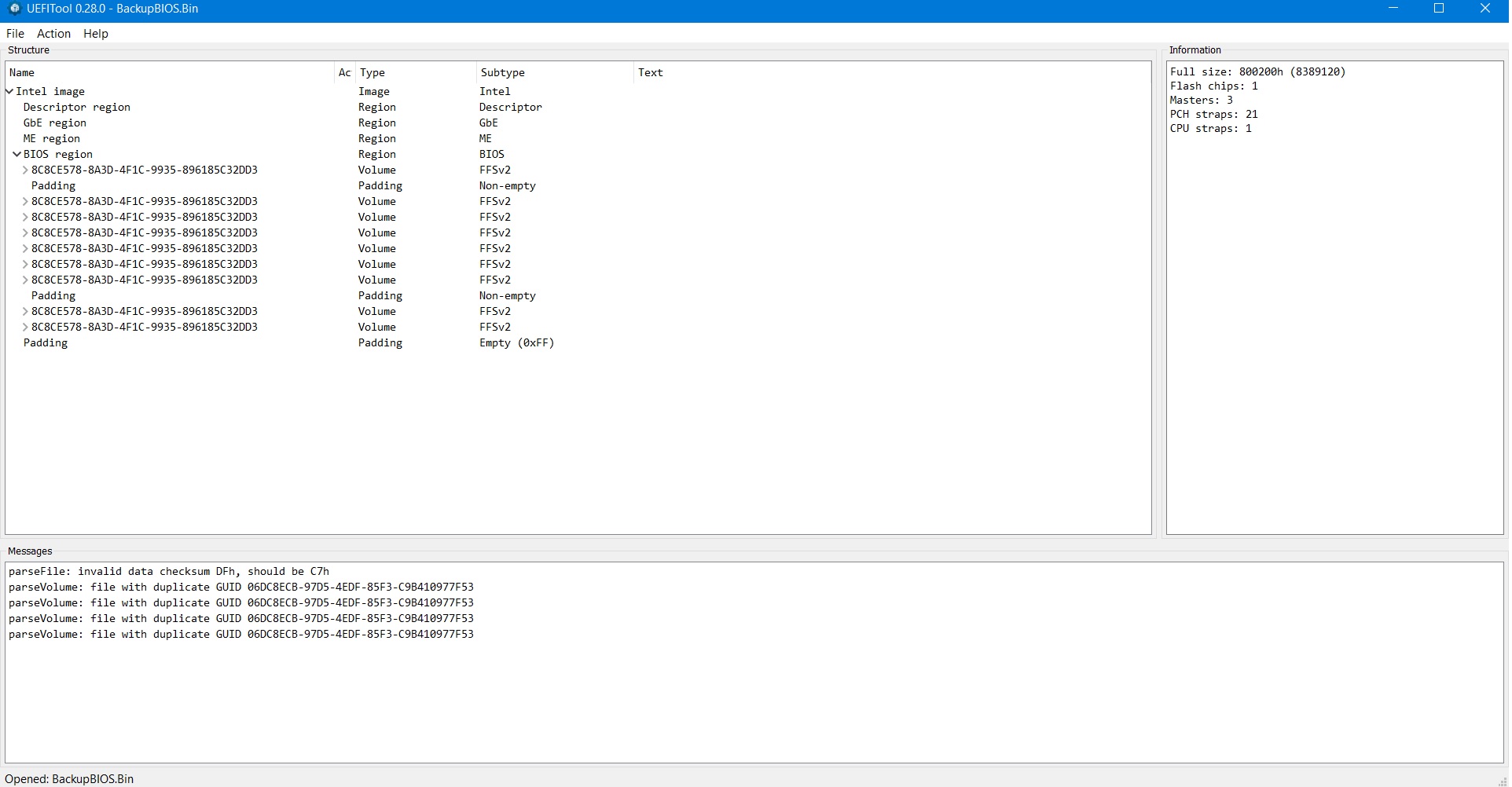 but at this point, however, I do not know where to insert the NVME module: 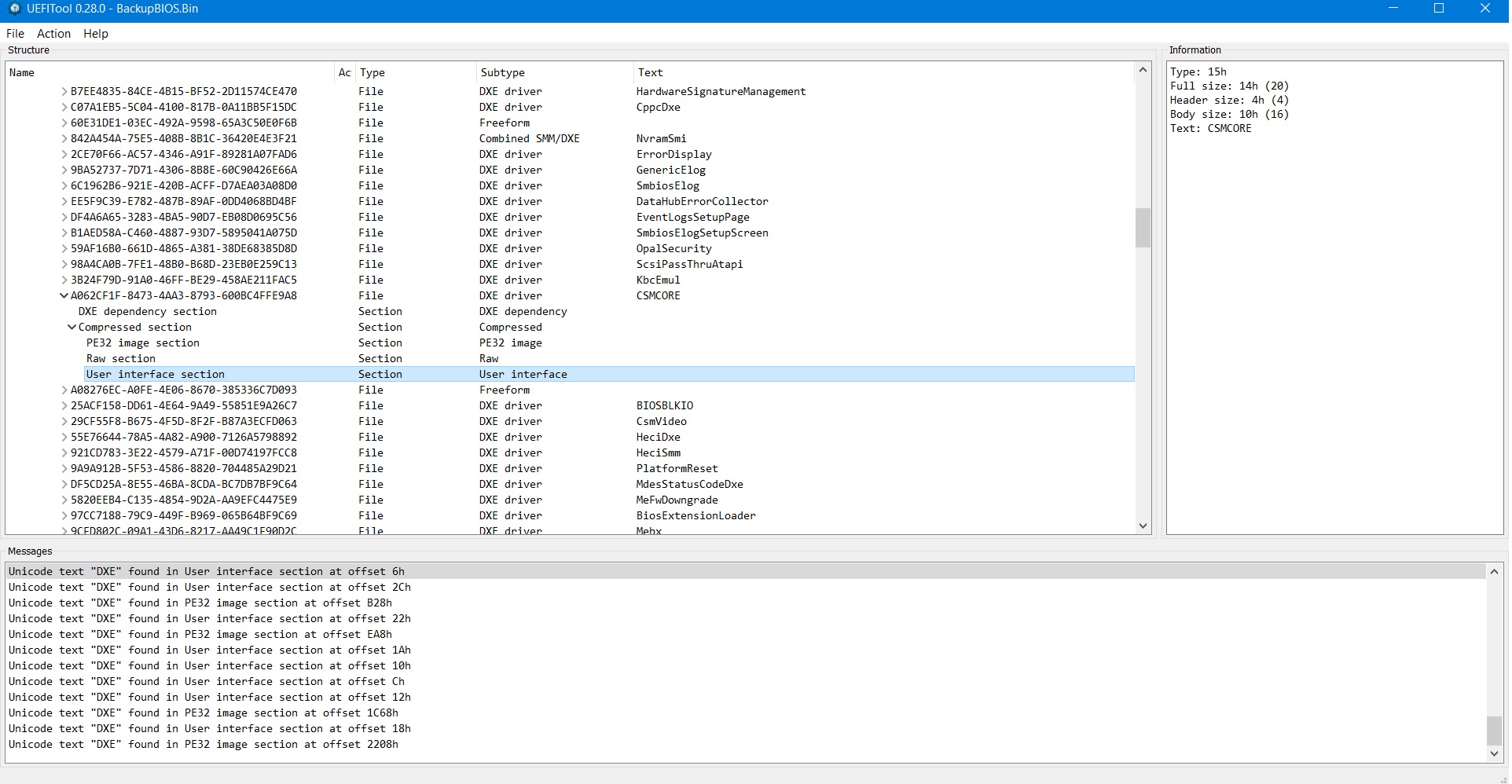 Can anyone kindly help me?

If it is useful, this is the link to my saved bios: