@ all users with an Intel AHCI or RAID system:

Function and (dis)advantages of the IRST/IRST(e) Software

The *.RAR files have to be extracted by a tool, which supports the modern v5 RAR compression!

Integration of Intel RST/RST(e) drivers into a Win7/Win8 image:
All Intel RST/RST(e)/RSTe drivers can be integrated into the image of the OS (look >here<), but usually the Win7/Win8 Setup will detect automaticly the HDDs/SSDs running in AHCI or RAID mode. Only exception is the “clean” UEFI mode OS installation onto a RAID array by using an actual EFI RAID SataDriver module. In this case you should either integrate a suitable up-to-date 32/64bit Intel RAID driver into the OS image or prepare a separate USB flash drive with such driver.

a) Correlation between Intel RAID driver and BIOS Module

Note: Due to the limited place and for a better overview I have moved the informations about the Intel RST Console Software and the related screenshots into the second post of this thread.

Finally I want to give you some informations about the appearance and the main options of the Intel(R) RST Console software, which will automaticly be installed, if you you run the installer of the complete RST resp. RST(e) package.
Furthermore I want to show you the differences between an Intel AHCI and RAID system, when the related users are running the various options of the Intel RST Console Software.

Installation of the Intel RST Software:

Informations about the RST Console options in AHCI and RAID mode

After having hit onto the "Intel(R) Rapid Storage Technology" link you will see the RST Console with the following tabs: 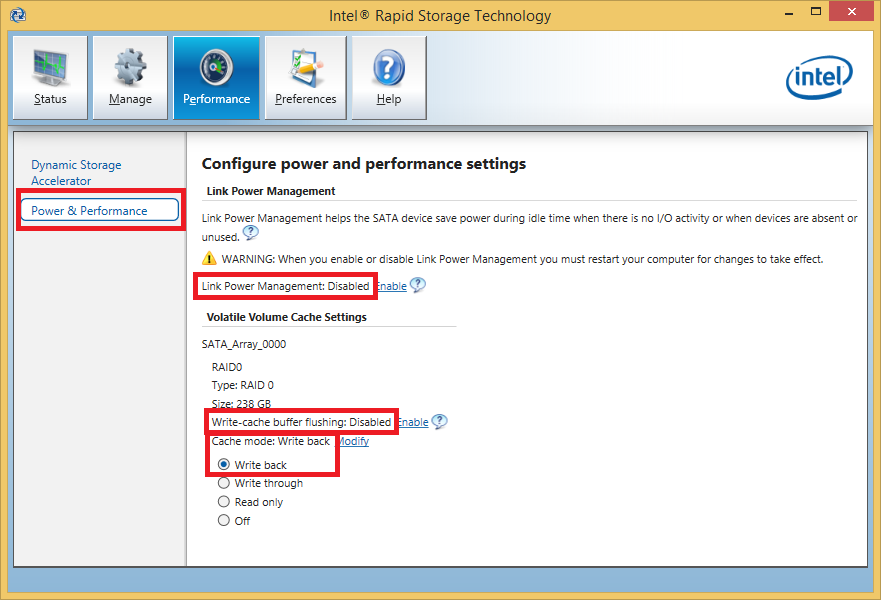 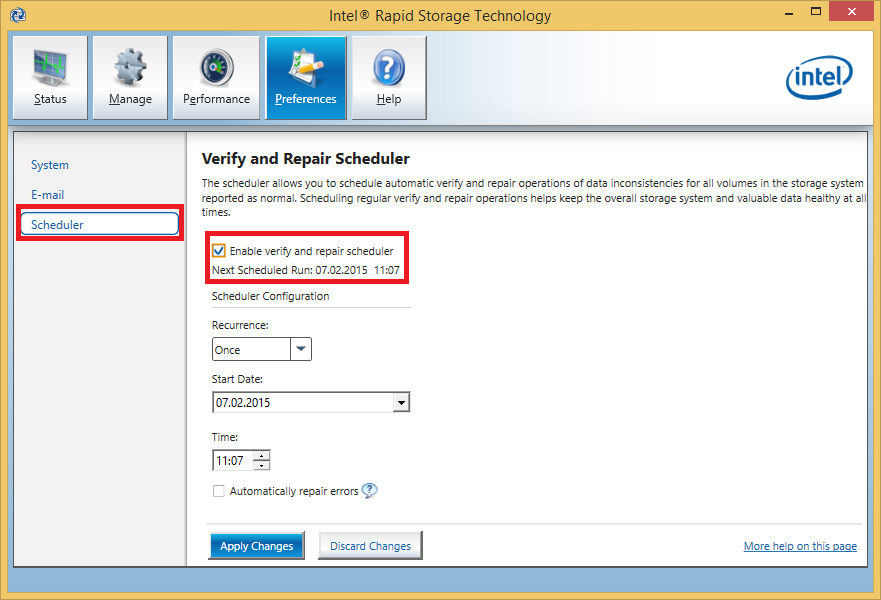 III. Intel AHCI and RAID Controllers
and their DeviceIDs

Many users of an Intel Chipset system have problems, when they are going to install/update or to load/integrate the appropriate Intel AHCI or RAID driver, because they don't know the exact model of their currently working Intel SATA Controller. Some of them do not even know, with which mode (IDE/AHCI/RAID) their Intel SATA Controller is running. The names of the various Intel SATA AHCI and RAID Controllers, which are shown within the Device Manager, were given by Intel and are not always helpful, because Intel has changed them very often without any comprehensible logic.
To make it easier for all these users, I have create a list, which contains
a) all Southbridges/Chipsets, which ever have been manufactured by Intel since 2007, and
b) the DeviceIDs of the various Intel SATA Controllers while running in AHCI and RAID mode.


A. List of the Intel RST/RST(e) SATA AHCI and RAID Controllers:

B. List of the "Enterprise Edition" Intel RST(e) SATA AHCI and RAID Controllers:

Have fun with these new Intel RST(e) drivers!
Fernando 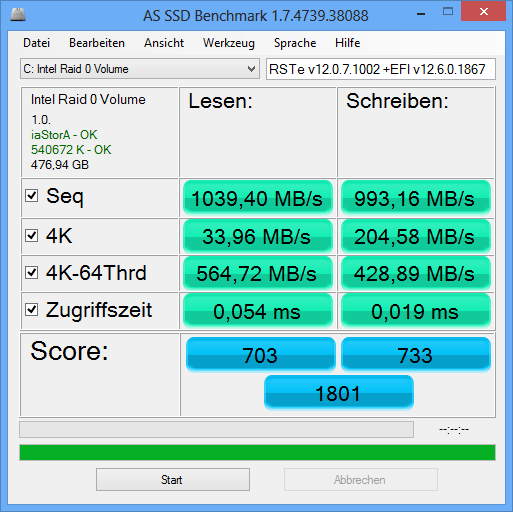 So the driver dates of the different driver series branches should not be compared with each other.
The user has to decide, which of the listed driver series may be the “best” for his system and then should look for the newest driver of that series

Hey Fern; I love what you’ve done. I was just stopping to tell you about the 12.7 rom, but you beat me.

Now I just need some time to read all your posts.

Last night our member Pacman has published >here< the link to Intel’s first RST(e) drivers of the v12.7 branch.
These brandnew drivers v12.7.0.1018 were compiled and digitally signed by Intel on 05/05/2013.
Since these drivers seem to run fine with actual Intel chipsets, I have updated the start post of this thread.
For further details and some test results you may look into the linked thread, which has been opened by Pacman.

Hello ex58,
welcome at Win-RAID Forum! It is fine to see you here.

Yes, they have already been pulled on 30th of May, but we haven’t yet seen any information regarding the reason.

Have fun with the AHCI and RAID drivers!
Fernando

As you may have already seen within the start post, there are new Intel RST(e) drivers v12.7.0.1022 available. They are dated 06/12/2013 and digitally signed by Intel (not yet WHQL certified, but easily to install even under Win8). These new drivers have been published by asder00 on 18th of June at Station-Drivers - a big thankyou goes to him.
Meanwhile I have some experience with these new RAID drivers v12.7.0.1022, which I am using since yesterday in combination with the Intel EFI "SataDriver" BIOS module v12.7.0.1936. After having done 24 hours of work and some benchmarks I am very satisfied with these new Intel RST(e) drivers. Everything runs very smoothly, the boot time is very short, TRIM in RAID0 works as it should.
My impression: These are very stable and performant drivers for my Z77 RAID0 system.

Have fun with these brandnew Intel RST(e) drivers!
Fernando 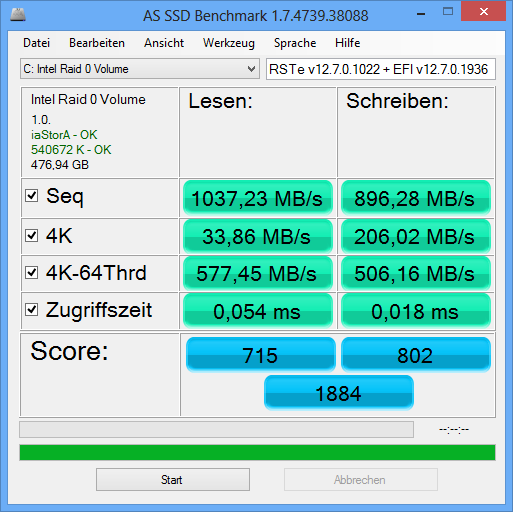 Hi Fernando,
Here is the benchmark result on my P8Z77-V DELUXE combo 12.7.0.1022/11.0.0.1339:
However i have a recurrent problem when shutdowning the PC after a more or less long period of inactivity.
When clicking on Stop the PC does not stop and is setting in hybernation than reboot automatically !!
i don’t know why ?

Unfortunately I cannot see them. How did you try it, by uploading it to any picture hoster or by attaching it to your post?

Neither do I. I have recognized the same shutdown behaviour as you.

i have tried to send 2 files by attaching and i get “uploading …” message a very very long time with apparently no progress, nothing happening,…
then i do ‘submit’.
how can i include in the text the bench results .png format ?

did you observed at least once a shutdown problem ? you have to wait at least 10 or 15 mn more to get the problem.
the shutdown screen appears, then a hdd seems to restart, then the black screen occurs, then the pc reboot as if i had requested a restart and not a shutdown…
i have checked iRST parameters and specifically power link management is well deactivate, i have set also in bios all peripherals ‘hotplug’ active as it is recommended with RAID 0.

i have tried to send 2 files by attaching and i get “uploading …” message a very very long time with apparently no progress, nothing happening,…
then i do ‘submit’.
how can i include in the text the bench results .png format ?

This is the way how to do it (maximum size of the file: 2 MB):
1. Hit "Attach file" (right hand at the bottom).
2. Hit "Select Files" ("Dateien auswählen") and navigate to the JPG or PNG file you want to attach.
3. Hit "Upload".
4. Navigate the cursor to the location you want to insert the picture.
5. Hit "Insert".

Our partner site Station-Drivers has just published brandnew WHQL certified Intel RST(e) drivers v12.0.0.1036 dated 06/27/2013.
Meanwhile I have put the download links to the 32/64bit Intel RST(e) drivers and the complete Drivers & Software Set v12.7.0.1036 WHQL into the start post of this thread.

With these newest RST(e) drivers of the v12.7 development branch many issues (bugs) of previous builds/versions have been solved. They are listed within the related ReleaseNotes, which you can download from >here<.

Have fun with these new Intel AHCI/RAID drivers!
Fernando

Here are the results: 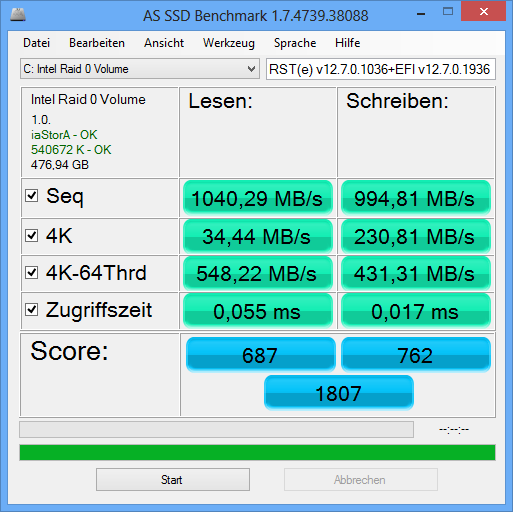 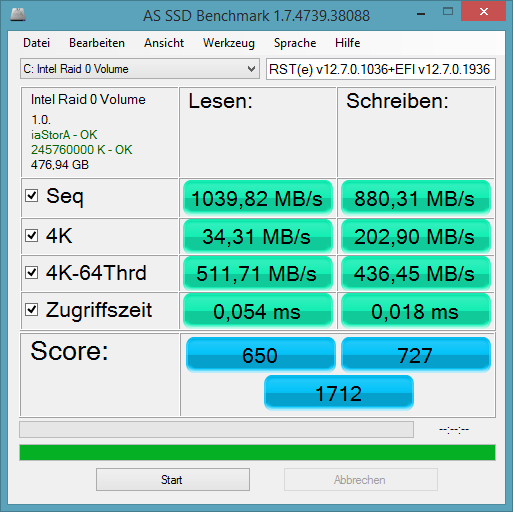 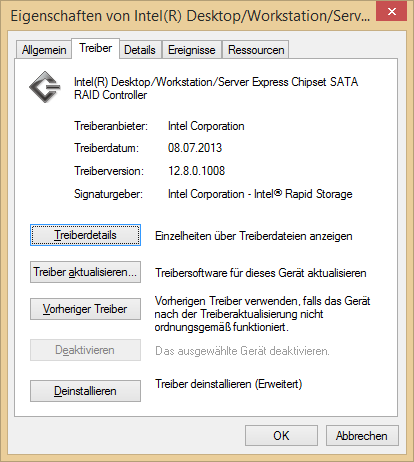 [[File:Intel RST(e) Console v12.8.0.1008.png|none|auto]]
You will find the direct download links to the 32/64bit drivers and complete Drivers & Software Set within the start post of this thread.

Have fun with these brandnew Intel AHCI/RAID drivers!
Fernando 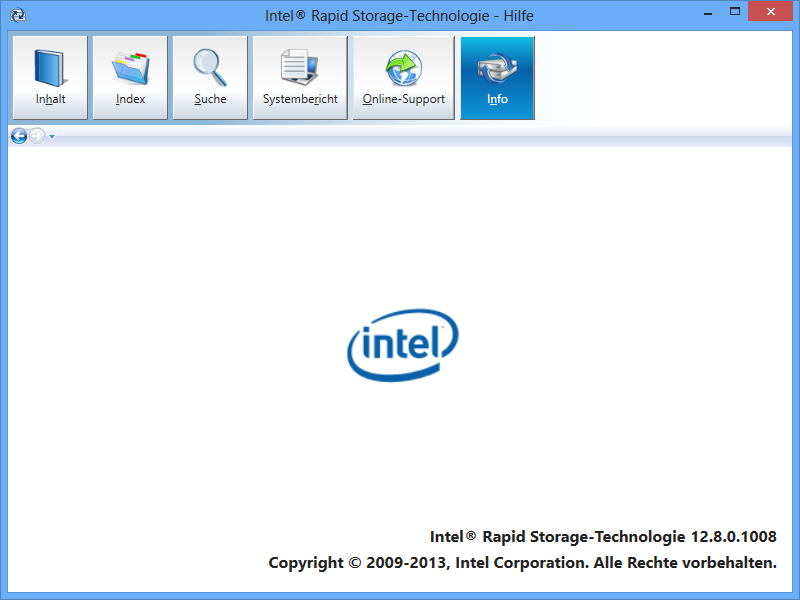